Blood on the Tracks

11 elephants died on our railway tracks in two weeks. Is there a way to stop this? 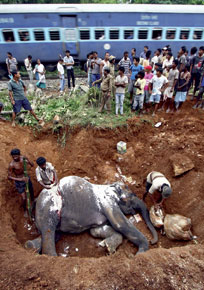 11 elephants died on our railway tracks in two weeks. Is there a way to stop this?


Hundreds of kilometres of railway tracks run through our wilderness. Every time elephants are run over, we question if the killer train broke the speed embargo of 40-50 kmph inside forests. At the same time, we also cheer Indian Railways as it aspires to run high-speed trains by 2020 that will clock 250-350 kmph.

Last week, the Parliamentary Standing Committee on Railways met to discuss how to stop elephant deaths on railway tracks. Between 30 December and 13 January, 11 elephants were killed on railway tracks in three corners of India. Each site has long been designated an elephant zone, where locomotive drivers are supposed to follow real-time inputs from forest staff on elephant movements, watch out and go slow.

The stretch close to Berhampur in Odisha, where the Coromandel Express ran over six jumbos on 30 December, between two warning signs of elephant movement put up by the Railways itself, has seen many more wild animals killed in the past, including an elephant last May. The tracks between north Bengal’s Alipurduar and Siliguri, which claimed three jumbos inside Buxa tiger reserve this month, was responsible for three dozen elephant deaths in the last decade. The third accident took place between Haridwar and Dehradun, where a high-profile protocol to avoid elephant deaths on tracks tripped after 12 years.

What matched these deaths in their unpredictability was the official blame game that followed. In Odisha, the Railways claimed that the input on elephant movement had reached it too late. In Bengal, it said the locomotive driver was well within rights to go at 100 kmph in the dark because it was still half an hour to 7 pm when speed restrictions come into force. At Haridwar, where a speeding Shatabdi hit the herd under a clear morning sky, it was blamed on the sudden emergence of the animals on the track. The Odisha forest authorities complained that the trains were not following speed restrictions along vulnerable elephant zones across four districts. In Bengal, the department increased the length of the go-slow zone along the 163 km stretch between Alipurduar and Siliguri from 17.4 km to 97 km. It also woke up to the fact that the 7 pm-5 am low-speed window did not cover the extended dark hours during winter and imposed a sunset-sunrise schedule.

In March 2010, the environment ministry had issued an advisory to the Railways to avoid elephant deaths. Six months on, when seven elephants were run over in north Bengal, then Environment minister Jairam Ramesh talked tough, waving that advisory. Last week, his successor Jayanthi Natarajan circulated the same advisory yet again. She also spoke of updating “the list of well-known vulnerable patches for wildlife”, posting forest staff at Railway control rooms in sensitive areas and regular meetings between the ministries.

Then, to throw in some novelty, the minister announced “a pilot scheme to electronically tag all elephants particularly in high-traffic areas” to ensure railway officials were warned “well in time”. Satellite collars can send real-time data on herd locations at quick intervals. But is it feasible or even desirable to collar hundreds of elephants? Forget the high density landscapes of Odisha and Uttarakhand, Buxa in north Bengal alone has more than 200 elephants. Other vulnerable forests in that region—Jaldapara, Gorumara, Chapramari and Mahananda—have many more.

Though elephant deaths are the most visible, thousands of wild animals die on railway tracks and highways that cut through forested areas every year. These accidents also risk passenger safety. The night six jumbos were mowed down near Berhampur last month, one person died on board from the impact of the collision. So far, the Railways have been lucky to avoid major passenger casualties. But collisions with elephants almost invariably damage and derail locomotives, lead to temporary suspensions of service, and cost the exchequer in crores every year. Yet, none of our remedies, such as tagging all animals or imposing blanket speed limits or banning night traffic, is practical.

Rail and road traffic must move fast to be efficient. Speed restrictions are feasible only when imposed along a short stretch, such as the 11 km killer track near Berhampore in Odisha or the 8 km stretch that cuts through Jharkhand’s Palamu or the 4 km death trap in the Palghat Gap that connects Kerala’s Palakkad and Tamil Nadu’s Coimbatore on both sides of the Western Ghats. But what is the point of restricting speed along nearly 100 km between Alipurduar and Siliguri when there is a less vulnerable alignment available through Fala- kata in north Bengal?

Of the 88 identified elephant corridors in India, 40 have national highways running through them, 21 have railway tracks and 18 have both. Not only these corridors, roads and railways cut through hundreds of kilometres of elephant and other wildlife habitat. It makes no economic sense to impose speed restrictions on such lengths of the network. Worse, accidents can never be ruled out even at low speeds due to a number of factors, including human error.

“If there is traffic, some loss will always happen. But limiting speed over long distances is not a realistic long-term solution. If we are serious about minimising damage, we have to take radical measures acceptable to all stakeholders and not only conservationists,” says Ajay Desai, co-chairman of the Elephant Task Force (ETF), set up by the MoEF in 2010. Vivek Menon, executive director of Wildlife Trust of India (WTI) and a member of the ETF, points out that speed restrictions are anyway not an option on steep gradients, such as Assam’s Karbi Anglong, where trains must run fast to climb the slope. The best way to ensure both efficiency and safety, agree Desai and Menon, is to realign where possible road/ rail corridors that cut through critical forests.

But some alignments must still cut through forests. For example, if Dehra- dun has to be connected, the tracks must pass through Rajaji national park. But even there, speed is not the only killing factor. A team of WTI researchers studied accidents in Rajaji and found that most elephants were run over by trains at spots where either the locomotive was coming round a bend or the track was flanked by sharp slopes.

Interventions based on this knowledge and reduced speed ensured that no elephants were killed on this track for 12 years till the system tripped last week. Insiders blame it on the complacency of both the ground patrol team and the drivers. More than a decade ago, the Railways had sought to fence off the most vulnerable stretch of this track and experts cleared the proposal since it did not significantly hamper herd movement. The fence, however, is still not in place. Desai says monitoring herds and alerting drivers of their presence cannot be a fool-proof method in difficult terrain. Menon prescribes site-specific solutions that are practical and scientific. But when it comes to the Railways or highway authorities, the stock solution is to provide low-cost overpasses or underpasses, which are no more spacious than drainage or service ducts.

A few years ago, the Supreme Court sought the view of the Wildlife Institute of India (WII) on the viability of building two elephant overpasses on a national highway that cut through Rajaji national park. Asked if elephants would use those overpasses, the WII chief said: “Ask the elephants!”

The SC rejected the overpass plan. Instead, a 0.9 km elevated stretch of highway between Motichur and Doiwala is being built at a cost of Rs 100 crore. There is a similar demand in north Bengal to build elevated tracks over the most vulnerable stretches. But the authorities insist on cheaper solutions.

All over Europe, Canada and the US, hundreds of artificial passages help reduce animal road kill. But most of these are used by amphibians, invertebrates, badgers, ungulates and other small mammals. Among the largest animals to benefit from such artificial access are mountain goat (Montana), mule deer, elk, moose (Nugget Canyon), the bighorn sheep (Colorado) and the panther (Florida). But there is no record yet of elephants using an overpass.

Sensitive to vibrations caused by the traffic below, elephants are unlikely to use an overpass even if it is built by joining two hillocks in a way that the natural alignment appears intact. They also avoid narrow tunnel-like underpasses. Funnelling the animals towards the underpass is also critical because herds stick to their traditional routes. The first instance of elephants taking an underpass was recorded in South Africa’s Kwazulu Natal province. Then, Kenya built a six-metre long underpass, linking Mount Kenya National Park and Nagre Ndare Forest Reserve, which is being used by herds since last year. At home, solitary bulls occasionally used the Dogudda aqueduct to cross the Chilla-Rishikesh highway but matriarchal herds stayed away. Then, towards the end of 2010, we had the first evidence in India that underpasses, when built properly, do allow regular herd movement.

About 35 km of NH 152 that connects Assam’s Pathsala to Bhutan’s Nganglam cuts through the buffer zone of Manas national park. Anwaruddin Choudhury, then deputy commissioner of Buxa district, insisted on realigning the original road that ran through the core of the national park and constructing two underpasses.

“For once, both the state and central authorities were receptive to the idea. Knowing that budgetary constraints will inevitably scale things down, I asked for 100 metre long and 50 feet high underpasses because elephants rarely squeeze through narrow gaps,” recalls Choud- hury. When the highway was ready in 2010, it offered two 30 feet high and 100 feet wide passageways, which elephant herds started using within months.

The other solution, as has been recommended for the highway cutting through the Kaziranga landscape, is to take the road underground. Technologies such as elephant sensors that trigger automatic braking have the potential of making railway tracks safer for animals. In many areas, says Desai, it is possible to simply funnel elephants with fencing to designated level-crossing zones where they, particularly calves, will not struggle to climb up or down the tracks. It is important, though, to use barriers across the tracks at such crossings so that jumbos do not get trapped by entering segments flanked by fences.

With the Railways planning to expand in the red corridor, new tracks will be laid across vast tracts of elephant forest in central India. The highway authorities have been pushing for clearances to expand roads through some of India’s best wilderness. “We have to prioritise because we cannot overnight realign all forest routes across India. But we must consider the speed and safety issues while planning these new projects,” warns Menon.

Be it realignments, flyovers, tunnels or spacious animal passageways, the infrastructure solutions will require additional investment. But India cannot shy away if it wants to protect the interests of both its economy and its wildlife. Otherwise, we can keep ignoring the loss of thousands of train hours and console ourselves that angry villagers in Buxa protested on the track for three hours, that the meat of dead elephants was sent to feed vultures at a local breeding centre, and that nearly two dozen people joined a candlelight vigil at Alipurduar.