The party’s conclave was intended to sort out some of its problems. Instead it seems to have compounded them 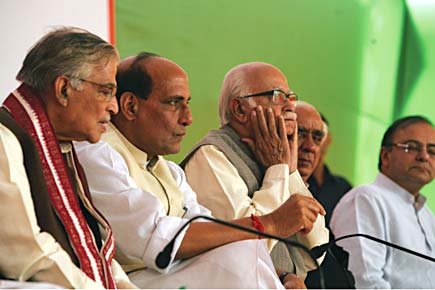 The party’s conclave was intended to sort out some of its problems. Instead it seems to have compounded them


The Bhartiya Janata Party (BJP) was once India’s ruling party. Now it is a spectacle. Two days after its top leaders went into a huddle in Delhi to set its house in order after an electoral drubbing that was unexpected in its scale, the party sacked its Uttarakhand Chief Minister BC Khanduri. At the conclave, the party’s leadership had asserted that the CM would remain in office, despite the electoral reverses in a hill state full of pilgrimage spots (and the associated sadhu-sant samaj) it had carved out of Uttar Pradesh (UP) in the hope of securing a saffron bastion for itself. The abrupt shift in stance only illustrates the confusion that has beset the BJP. It has catalysed rather than dampened the fires raging within.

Before the conclave began, it had a two-fold objective—clarify the confusion on ideology and settle the question of party leadership. These issues had assumed high salience because of a spate of letters by senior leaders such as Jaswant Singh, Yashwant Singh and Arun Shourie asking for accountability for the electoral debacle, after an eruption of voices in the print media calling for moderation. It was not only advisors such as Sudheendra Kulkarni, an LK Advani acolyte, but even party strategists such as Arun Jaitley, the architect of the party’s dismal election campaign, who had expressed the view that wisdom lay in shedding the BJP’s image as a party of hardliners.

Consider what actually transpired at the conclave on the issue of ideology. Many within the party held that the Pilibhit MP Varun Gandhi had contributed substantially to the drubbing with his infamous hate speech. Maneka Gandhi was the only one to rush to his defence, demanding instead that blame for the poor showing in UP be pinned on organisational issues related to ticket distribution. But the party’s Muslim faces, Mukhtar Abbas Naqvi and Shahnawaz Hussain, did not buy this argument. At the end, the party didn’t take a stand. Though this may seem like a return to the dilly-dallying style that characterises the BJP on such issues, the very verve with which Naqvi and Hussain vocalised their assessment is a notable first for the party.

Other than that, all that did occur at the conclave was that Party President Rajnath Singh—whose cosiness with the RSS leadership has seen him through two terms—chose to declare that the election was not a referendum on Hindutva, and defeat could not be interpreted as such. This was his opening speech. For his part, Strong Leader LK Advani brought the curtain down by showcasing an ‘inclusive’ Hindutva, a term that leaves nobody any clearer about the party’s position on its ideology. Spokesperson Ravi Shankar Prasad’s clarification that Rajnath had defined Hindutva as “eternal, geo-cultural, liberal and tolerant” has not helped matters.

As for the issue of leadership, the party went into the meeting with Arun Shourie and Jaswant Singh of the ‘lost generation’—a term for BJP leaders sidestepped in the party’s succession plan—asking for their pound of flesh for having stuck around and worked so hard for the party. Rajnath Singh sought to deflect their thrust by evoking the BJP’s commitment to “collective responsibility” while offering to accept responsibility for the failure.

Arun Shourie was in no mood to be taken in; he said it was all very well for the president to take responsibility, but accountability needs to be exercised at the level of election strategy making—a clear reference to Arun Jaitley, who was conspicuous by his absence, holidaying in London after having quit as general secretary.

The party’s divided leadership put away the matter for the party’s ‘chintan baithak’ (brainstorming session) in August, but neither Jaswant Singh nor Arun Shourie had budged from their positions at the end of the two-day meet on 21 June. The latter was dismissive of the August baithak, since the same bunch would be making decisions anyway. A former editor himself, he quipped that the party was being run by a group of six journalists—a dig at LK Advani’s campaign team. By Arun Shourie’s proposal, the party should be run by a ten-member committee until the next election for the post of party president.

The jostling for power, or ‘debate’, had an offsite element as well. It was no coincidence that a day before the conclave, Gujarat CM Narendra Modi’s media team was texting journalists in Ahmedabad that they should take a look at the CM’s blog. In his first entry since the electoral defeat, Narendra Modi had made a singular point—what differentiates the BJP from other parties is its rotation of presidential power every three years. This is how fresh leadership is best inducted and renewal ensured. Surprisingly, though, Gujarat’s own Strong Leader kept a very low profile throughout the conclave, surfacing only to take on the central government over the Gujarat Terror Bill.

Yet, overall, the message was clear. From Delhi to Ahmedabad, the party was awaiting change at the top. The change would be two-fold. The party’s first dilemma is ‘who after Advani?’ The second—who replaces Rajnath Singh as party president come end-2009?

The buzz within the party is that Rajnath now wants the party constitution amended to allow him a third term as president. Under attack, both Advani and Rajnath, despite the open rivalry between their factions, contended that the BJP still had 116 seats, had seen much worse in the 1980s, and its 2009 performance was better than the Congress party’s own low of 114 seats in 1999. That the BJP’s voteshare has consistently declined in every election since 1999, however, is something they kept silent on.

The conclave’s postponement of the leadership decision is likely to widen fissures within the party. It’s a sign of internal divisions that every word spoken at the conclave was leaking out, despite it being officially barred to the media. As party spokespersons rushed to deny news of Rajnath Singh stopping Arun Shourie in his speech mid-way, for instance, it’s known that Jaswant Singh spoke frankly of being hurt by ‘planted stories’ of his attachment “to a certain room in Parliament”. This was a reference to the Leader of Opposition office in the Rajya Sabha, which he occupied last time round. Since Jaswant Singh is now a Lok Sabha MP from Darjeeling, the post went to Arun Jaitley. As for the Lok Sabha, it was Jaswant Singh’s ‘junior’ Sushma Swaraj who had been appointed deputy leader of the opposition in that house—indignity enough for him to announce that he wouldn’t contest another election.

The leader of the lost generation, Yashwant Sinha, did not even attend the conclave, having resigned all party posts including his membership of the national executive. If the timing of his resignation—a few minutes before Rajnath Singh was to address a scheduled press conference in New Delhi—embarrassed the party leadership, his highly vocal rant against Arun Jaitley being “rewarded” for the party’s losses added to its discomfiture.

Faced with such turmoil within a party that went to the electorate a couple of months ago on a promise of decisive governance (‘Nirnayak Sarkar’), both LK Advani and Rajnath Singh sought refuge in the party’s ultimate arbiter, the Rashtriya Swayamsevak Sangh (RSS). Rajnath Singh met RSS leader Mohan Bhagwat in Jammu two days after the conclave. LK Advani, in turn, reiterated the BJP’s historical links with the RSS—in an obvious attempt to retain its favour—even as he quoted Bala Saheb Deoras, RSS chief in 1979-80, as saying that even the RSS needs to change with time.

Perhaps the BJP’s Strong Leader did not realise the irony of his own words, even as he plans a tour of the states “to meet workers and civil society to rejuvenate the party”. As the man who gave the BJP its fighting spirit and lunge for power with his Rath Yatra in 1990, he now comes across as a man bereft of ideas. The party, in the meantime, is left wondering—if neither Rajnath Singh not LK Advani, then who?