The semi-literate ‘inventor’ of herbal petrol has a secure place in the modern Indian pantheon of conmen. After 15 year, he’s back with new tricks. 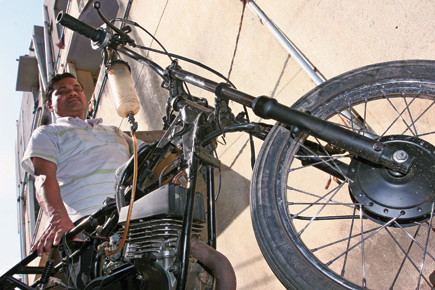 The semi-literate ‘inventor’ of herbal petrol has a secure place in the modern Indian pantheon of conmen. After 15 year, he’s back with new tricks.


Remember Ramar Pillai, the wiry self-styled alchemist who could turn water into gasoline? With crude oil prices so volatile in this day and age, the 48-year-old is the miracle man the world needs. If only he can get his chemistry right. Nearly 15 years after his magic fuel was exposed as a combustible cocktail of petrol adulterated with cheap industrial spirits, Pillai is threatening to strike again. This time, armed with wisps of organic chemistry knowledge, patent applications, and dubious certifications from overseas scientists.

Pillai first shot to fame in 1996, when he claimed to have concocted a cheap herbal alternative to petroleum. Scientists and politicians alike were taken in by his demonstration, using jerry cans, plastic funnels, thistle funnels, burettes and the like. The final act of his PC Sorcar-like show would usually involve Pillai driving a herbal fuel powered TVS 50 moped, with wife in tow. But he always kept the formula secret.

At the time, a senior advisor at the Central Government’s department of science and technology had this to say: “Tests conducted by Madras IIT found Pillai’s petrol to be ten times more efficient than ordinary petrol.” Impressed, Tamil Nadu Chief Minister M Karunanidhi promised free land for Pillai to grow his wonder herbs and set up a factory, besides financial assistance for research. Riding high on fame, he even set up a dozen retail outlets in Chennai, handed out franchises under Tamildevi as a brand, and began selling his magic potion for around Rs 15 a litre, a good Rs 20 cheaper than petrol then.

In a country in love with folk heroes, Pillai’s was a compelling story of farm-raised genius. From Rajapalayam in south Tamil Nadu, a town famous till then only for a fierce canine breed, the ‘Tamil Edison’ had no formal education but plenty of spunk. Even this writer was intrigued enough to try his herbal petrol, during my student days, in a 65 cc moped. While the fuel works, it also screws up the engine badly. In 2000, after a spate of consumer complaints and tide of scientist disenchantment, Pillai’s luck ran out. The Central Bureau of Investigation arrested him.

For a man who was once the object of curiosity of an entire country, and the toast of his home state, Pillai now lives in near total obscurity. His home, a few kilometres from Chennai’s Loyola College, is in a crowded chawl that overlooks a fish and poultry market. I ask a vegetable seller next to his house if Pillai stays somewhere nearby. He has no clue, and is surprised to hear the name. Its fame has survived, but as a butt of jokes. Tamil cinema comedians have lampooned him, and tricksters have been nicknamed Ramar Pillai.

The original Pillai lets me into his two-room shanty after some hesitation. His house looks like a mechanic’s workshop. A huge puja almirah coexists with a heap of nuts and bolts, carcasses of computers lie scattered, and there’s an under-repair air cooler near some large plastic drums of herbal fuel. Separated from his wife and two children since his arrest, he now lives with a friend’s family who he claims has adopted him. I suggest going to a municipal park where it may be easier for us to speak privately, but he says being seen in public could be a threat to his life. Instead, he settles down in a grimy easy chair—to explain how he was shafted by a corrupt and greedy system.

So what went wrong? Talking about cases against him, Pillai’s manner resembles comic villains’ in Tamil films. Exhaling sarcasm, he questions the competence of cops to frame charges against a scientist. “It is the patent office that should have verified my claims.” He claims never to have confessed to herbal fraud. “The politicians knew what I had invented was very precious. They were upset that I refused them a share of the commercial benefits. In collusion with scientists who were jealous that a rank outsider had invented something like this, they framed me.”

Despite all evidence of penury around him, Pillai himself looks prosperous. He wears a thick gold chain around his neck and is looking rather well-fed since I met him last in 1998. What has he been up to? “I have read organic chemistry books from the BSc to MSc levels. My problem was that I couldn’t speak to scientists in a language they could understand.” He then whips out a dossier with copies of his patent applications in India, and endorsement from Ivan Christensen, head of laboratory testing at the Danish Institute of Technology. In a 2008 letter, Christensen wrote: ‘Ramar has demonstrated several quick methods for producing bio-fuel. The fuel burned readily, and there is no doubt that plenty of fuel can be produced at low price. For this reason, his discovery is unique, and Ramar deserves some worldwide reputation, eg. By Nobel Prize.’ Contacted by Open, Christensen acknowledges the letter, but adds that he got carried away when he saw the experiments first hand. “We all make mistakes,” he says, “I think it was one of them. I’m afraid it is a blot on my scientific career.”

However, Pillai claims to be in talks with several governments in Southeast Asia to obtain local patents and start commercial production. “The Malaysians, for instance, have given me a lot of respect that’s absent in India. I’m likely to get approvals from them in a couple of months, and then you’ll see what Ramar Pillai can do.”

If that claim is not bizarre enough, Pillai says that it would take little to create annual capacity in 15 days flat to exceed the amount of petrol Indian Oil Corp sells in Tamil Nadu. But he needs to stay alive, you understand. “Do you know the number of people who are out to kill me?” he asks, with a touch of melodrama that wouldn’t be out of place in a spy thriller, “I know they will get me one day, but I have made such arrangements that within two hours of my death, my formula will become public property and the names of all those who have conspired against me and our country benefitting from my invention will be out in the open.”

Was it PT Barnum who famously said a sucker is born every minute?