The Desi Spirit of an Insurgent Brand 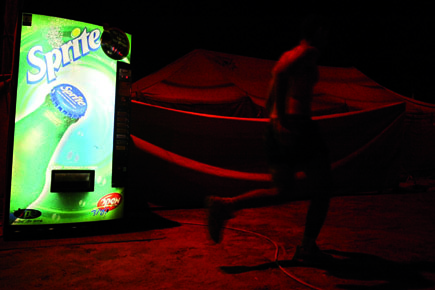 
As in the political arena, so in the mass market. An insurgent has whizzed its way up to the top, snapping past its own. Sprite has emerged as India’s No 1 fizzy drink. According to figures just released, the brand’s summer sales have taken it past both its big inhouse rivals: Thums Up, an Indian favourite since 1977, and Coca-Cola, a 127-year-old megabrand that also claims to be the world’s most understood term—barring ‘okay’.

So how did Sprite do it? It thumbed its nose at nonsense. Ever since its desi debut in 1999 in a dimpled bottle, Sprite has positioned itself as a rebel with clarity, the kind needed to scoff at all the pomp and pfaff of others vying for attention.

In spirit, all it did was adopt a version of the ‘uncola’ stance that PepsiCo’s 7-Up once had. Ah, but Sprite did its own thing.

With an ‘honest straight-forward attitude’ as its global appeal, its consumer proposition was elementary: ‘Be yourself, obey your thirst.’ To crack the scene in India, however, it needed to say the elementary in a far more feisty way. It picked the pulse of a significant but silent segment of the market that was fed up of all that grandeur in the air at the turn of the millennium, and set about calling the bluff of others even at the risk of exposing its own company’s older brands to ridicule. Sprite’s breakout commercial of the early zips had Lisa Ray in a fizzy bathtub trying—in vain—to beautify herself with the lime drink. ‘Bujhaaye only Pyaas,’ she’s told, ‘Baaki sab Bakwaas.’

In a country full of false claims and true needs, the brand’s young audience saw rhyme and reason in its all-quench-no-stench message. The brand’s adlines since have been of variable appeal, but each has been as impish as the other. In 2004, Sprite spoke of ‘No Gyaan, Only Pyaas’. Four years later, of ‘Seedhi Baat, No Bakwaas’. And this summer, its cheeky campaign had a collegian deflate an ‘Amar-Akbar-Anthony’ trio of chest-thumpers with unruffled modesty; ‘Chalo apni Chaal,’ advises the ad. The thirst story, meanwhile, has been taken over by Limca, its cloudy sister brand.

All said, Sprite’s success bears an edge of differentiation that’s reckless no less than competitive (in a Michael Porterly way).

Is it sustainable? Hmmm. So long as it sparkles as a real voice of clarity, it may well turn out to be. Taking on bakwaas is tough business, even if there’s so much on display. But then, as seen in any democracy, it’s what generates all the fizz.