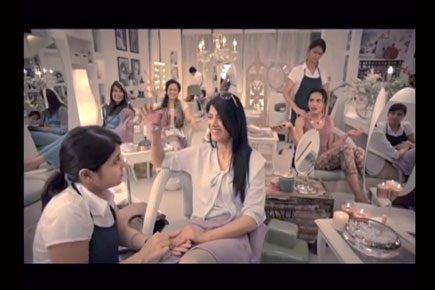 Advertising it’s in the air. It’s on the air. It’s everywhere. Like life’s two big Twainist certainties—the second of which pollsters appear keen to modify— it’s usually worth no more than a shrug. Usually, but not always. It’s the game of gaining mass influence, and it goes on with ever greater gusto day after day, animated by a sense few players were familiar with 20 years ago: a sense of competition.

Ever since India opened up to the idea of commercial competition as an economic stimulus, the star performers of this sport have mostly been brands vying fiercely with one another for the consumer’s favour. These are not just brands, they are advertisers, and they sure know how to turn on the charm. Just last weekend, a Mumbai agency called CreativeLand Asia won a grand award at Adfest 2014 held in Pattaya, a blow-ego festival that has a cool headstart over India’s own Goafest in portraying itself as Asia’s Cannes. The hotshop won the festival’s sole Gold Lotus in ‘film craft’ for a Frooti commercial crafted to counter Slice’s ‘Aam Sutra’ appeal: it features a gang of footballers drooling like little kids at the sight of Shah Rukh Khan gulping his aam juice like there’s no tomorrow. What slurped up the honours was its soundtrack, a lovesong sung in a strange tongue with only four discernible syllables of Hindi: ‘peele pilaa.’ Hmmm…

No less evidently, another arena that has been convulsed by competition over the past two decades or so is the field of politics, and while appeals for electoral favour are anything but sexy—unless one counts Meghna Patel’s American Beauty poster that was disowned by the party in whose aid it appeared—the sound and fury of next month’s election is already loud enough to draw eyes and ears away from the most influential of mass-market brands. An obvious strategic response to this threat would be to join the electoral hurly-burly with a message of one’s own.

Of the brands that have yielded to that temptation, Center Fresh is clearly the most cheeky. With its spoof on all the bilge in the air, the brand sells its audience a dream of having all peddlers of ‘Yeh Waala’ this or that gagged with its chewing gum. The brand’s promise: ‘Zabaan pe rakhe lagaam.’

Inspired by a similar concern for one’s strained ability to take nonsense but rather artless in execution is a telecom brand, Idea. With ‘No ullu banaoing’ as its latest usage idea, it promotes handset videos as a great way to expose braggarts for what they are. Its message is admirable enough. Nobody wants to be made a fool of. Except that its character choices offend egalitarian sensibilities: why does the adfilm’s hero, played by Abhishek Bachchan, look so determinedly different from its ‘paani’ promising politician? It reminds me of an appalling Indian Railways depiction of a fair hand nabbing a dark one for a chain-pulling offence.

Arguably, the most impressive adfilm on air is the ‘Power of 49’ spot for Tata Tea, the latest part of its ‘Jaago Re’ campaign.

Set in a swish beauty salon, it opens to some idle chatter on the wonders of pepper spray among a bunch of snoots, one of whom patronisingly advises her pedicurist—in Hindi—to arm herself against creeps too.

Oh, for that, replies the pedicurist, she’d rather rely on her ‘kaala teeka’—an utterance that evokes tsk-tsks in dismissal of what’s taken as an illiterate attempt to ward of an evil eye.

An exchange of sighs.

“Actually madam, educated logon ko bhi kaala teeka lagaana chahiye,” says the pedicurist, explaining why even they ought to take her cue, as she holds up a finger—to their shame and her triumph—inked with the black dot of a vote cast.

It’s one cracker of a campaign.

Speaking of political naivete and misinterpreted dots, though, one of the world’s most haunting ads is an adfilm called ‘Join the Dots’ run by a Latin American newspaper to illustrate a point of perspective. It uses a series of dots that appear one by one in close-up for each datapoint of cheerful news. One for rapid industrial output, another for some other heavy-duty statistic, and so on and so forth in a frenzied fury of dot proliferation… until the screen zooms out to reveal a dot- matrix outline of the Führer’s face. Aired a long time ago, the point it made is still vivid. Or is it?