What Do You Call Picture Books for Adults?

The ‘graphic novel’ is a great marketing gimmick. So grown-ups can buy comics about men in flashy briefs, unabashedly. 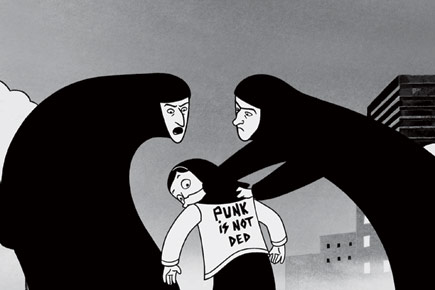 The ‘graphic novel’ is a great marketing gimmick. Grown-ups can buy comics about men in flashy briefs, unabashedly.


I was talking to a friend recently about my fascination with comics, specifically Neil Gaiman’s Sandman series and Frank Miller’s The Dark Knight Returns, and she interrupted me to correct me. “Not comics,” she said. “Graphic novels.” It was all I could do to keep from foaming at the mouth. I then explained to her, as patiently as I could, the excellent marketing gimmick that is the ‘graphic novel’, and how it was originally used to describe comic-book adaptations of short stories and novellas. And how Will Eisner co-opted the term to market his A Contract With God, and Other Tenement Stories to adults, instead of the children who traditionally read comic books. I then directed her to a YouTube video of Neil Gaiman explaining how he wrote comics, and couldn’t, for the world of him, understand what a ‘graphic novel’ was.

This is not unique to Gaiman. Most of the legends of the medium—Stan Lee, Jack Kirby, Alan Moore, Frank Miller, to name just a few—have insisted that they worked with comics, and that ‘graphic novels’ was just something the marketing department put on the books to make grown-ups feel better about buying them. This includes Moore’s Watchmen, probably the modern era’s quintessential ‘graphic novel’, which was originally serialised in 12 comic-book-sized issues. It’s probably worth adding here that what commonly passes for a ‘graphic novel’ in bookstores today are known as trade paperbacks, a collection of multiple issues containing a single story arc. Unlike Watchmen, Art Spiegelman’s masterful Maus and Marjane Satrapi’s Persepolis would qualify as true graphic novels, published as single volumes without any serialisation.

The graphic novel syndrome affects most Indian writer-artists working with the comic-book idiom to tell their stories. The term has been injected with a sense of gravitas by its purveyors, and as such, has resulted in plenty of extremely self-conscious and contrived storytelling. For instance, take Amruta Patil’s Kari. It’s a drone of an illustrated short story (or is it captioned paintings?) about a whiny, lesbian advertising professional that doesn’t even use the format of a comic book. Sarnath Banerjee does better with his Corridor and The Barn Owl’s Wondrous Capers, but offers little more than an honest effort. The latter is particularly disappointing in its storytelling. In adapting to the comic-book idiom, Banerjee compromises the integrity of his story, and it ends up meandering like a severed kite. If ever there was a case to be made for an editor’s guiding hand, this is it. But where does one find an editor who understands the medium well enough to mentor young writers?

The comic-book industry in the West has always straddled multiple worlds. Writers such as Moore, Miller, Gaiman and Warren Ellis, who have all written a number of path-breaking adult comics, cut their teeth writing for DC and Marvel Comics’ pantheon of super-heroes. To paraphrase Gaiman, there’s nothing like writing about grown men swinging around in brightly-coloured spandex to stop you from taking yourself too seriously.

In addition, one might add, the editors at these publishing houses, such as Julius Schwartz at Marvel and Archie Goodwin and Karen Berger at DC, set very high standards for their properties, allowing young, upcoming artists and writers to get used to the rigour of producing high-quality work on a regular basis, and under a tight deadline. Indeed, Miller’s Daredevil and Moore’s Swamp Thing are considered to be some of the best work in the history of super-hero comics.

Contrast this with the scenario in the Indian comics industry. Amar Chitra Katha and its basket of properties focus exclusively on children, and are only now beginning to publish new titles in addition to their decades-old catalogue of over 400 titles. Indrajal Comics, home to the first indigenous Indian comic character, Abid Surti’s Bahadur, has disappeared. Raj Comics and Diamond Comics, with their hugely popular superhero titles, cater to a Hindi-speaking audience, peddling shoddily produced comics to audiences who simply don’t know to expect better.

It is here that the true opportunity exists for young writers to tell engaging and intelligent stories that expand the reach of these characters beyond their current audience. Raj Comics, currently going through a rejuvenation phase, should seize this opportunity in their own right to take their properties to the next level.

One reads comics for the same reason that one might read a short story or a novel: the story. The visual medium is merely a device that enables the story to be told using certain techniques, providing a unique experience to the reader, but it is really the story that will bring him back for more. A good story with mediocre artwork will attract far more readers than superbly-drawn comics with poor story-lines.

Virgin Comics learnt this the hard way, watching their brilliantly-drawn but horribly-written titles circle the drains with no end in sight. And good writers can only become great writers if they are pushed to deliver a higher standard by the publishing mechanism, through mentorship, editorial input and collaboration. Ditto for the artists, whose responsibility it is to make the story come alive on the page.

But let me add here that this system is not necessary to produce superstars. Harvey Pekar, Chris Ware and Art Spiegelman did not have to go through the grind before delivering comic-book masterpieces. Osamu Tezuka, that legend of Japanese manga, produced amazing work as an amateur before abandoning his medical practice to produce manga. But India is yet to produce a Spiegelman or Tezuka, and we should not hold our breath. All we can do is appreciate them when they do arrive. Meanwhile, it is best to hope that the system can deliver a strong pipeline. Of course, a thriving ecosystem with mentorship and apprenticeship is no guarantee of high-quality professionals. Just look at Bollywood.