Salman Rushdie: Novelist of the Now 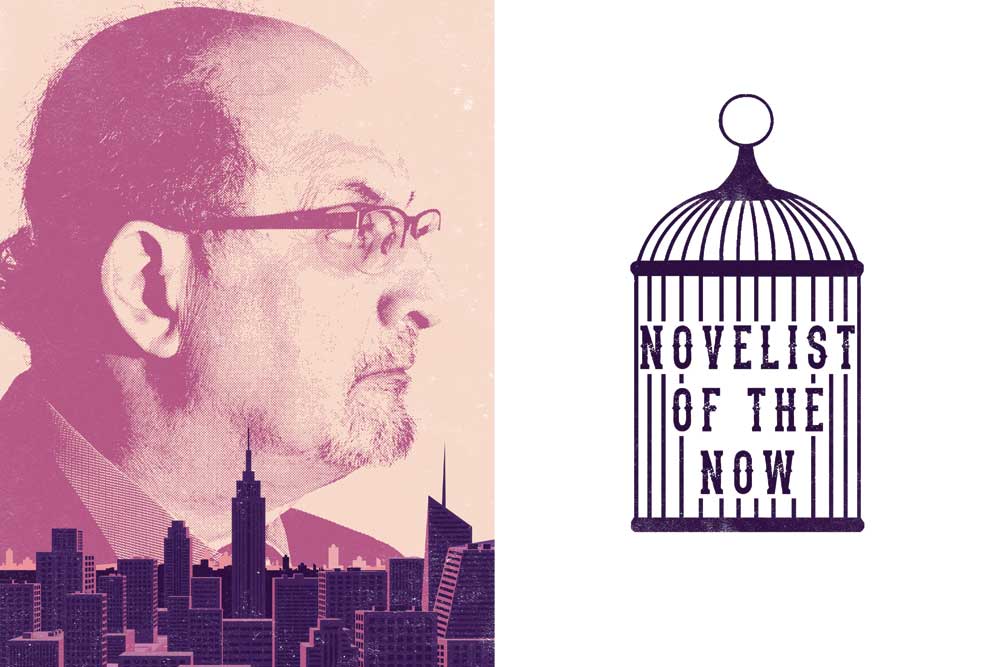 ELSEWHERE IN THE GOLDEN HOUSE, IN one of their breakfast conversations, the narrator René Unterlinden’s Indian-American filmmaker girlfriend, Suchitra Roy, tells him, “Dostoevsky got all his plots by reading the crime pages of the newspapers.” On the pages of the Great Russian, his country was the site where some of fiction’s most conflicted souls played out their existential drama, elemental and extreme. In a Salman Rushdie novel, the world he holds in his palm with a magician’s ease is a big bad idea, and when he plays with it, using allegory, allusions, and voice-overs, yesterday’s headlines become reimagined set pieces of our political and cultural times, and their comic exuberance can’t hide the resentment of the thinker-storyteller. And structurally too, the vintage Russian novel, shapeless and spacious, is the ideal model for the novelist who prefers the multitudinous to the miniature: a container ship of the imagination, maybe an ark of metaphors as eclectic as Noah’s.

It’s about being in the world, being enchanted as well as enraged by it. It’s about being trapped in history, irredeemably, and still not losing the argument for freedom. Since Saleem Sinai’s ‘dangerous sort of involvement’ with Fate in Midnight’s Children, Rushdie has been hosting various mutant lives shaped by cursed geographies in his fiction. In his subcontinental novels, Midnight’s Children and Shame, it was as if Marquez and Grass joined to translate the bathos and burlesque of freedom’s day after in an invented patois. In The Satanic Verses, his widely unread or misread novel, loss of faith and transmigrations were inevitable for lives lost in Jahilia. The theatre continued to shift, from the real to the fabulous, from the magical to the malignant, and the East kept its conversation with the West, in what one reader called bougainvillea prose, as Rushdie undertook fiction’s most rewarding—and life-threatening—picaresque. The last time we met him, he was in the thrall of updating Arabian Nights for duller, darker times; and the jinn were at his disposal to wage the War of the Worlds. In the end, when peace was restored, evil was defeated, a place without fairies seemed boring—the wildness of our dreams was tamed by reason.

Rushdie is back with a big, noisy, shape-shifting novel set in the delirium of the now. It is an American thriller where every page is a mise en scene

Three years on, it doesn’t look so. In his first full-blown New York novel after Fury, where a disillusioned academic and storied doll-maker named Malik Solanka is the man at the centre of a Manhattan whirl, Rushdie is back with a big, noisy, shape-shifting novel set in the delirium of the now. It is an American thriller where every page is a mise en scene, the authorial eye is as exaggerative as a movie camera, and nothing is lost in its perceiving gaze: the comic strip politics, the culture wars, the embarrassment of riches, the bling, the bluster, and the brio and bathos of being alive in such a world that it may need a Shakespeare or a Mario Puzo, a Sophocles or a Fitzgerald, a Scheherazade or a Satyajit Ray, to tell the story with flair, or so it seems. Rushdie plays the roles to perfection, and in every word, every allusion, you just can’t miss a writer enchanted by his own art—and smartness. The multi-vocal, cinematic— and at times ‘mockumentary’—narrative style is made essential by the writer’s determination to leave anything less illuminated.

It’s transition time in the political as well as personal lives of America. On the first page of The Golden House, a new president is sworn in, and the narrator worries for his life as he walks hand in hand with his ‘exceptional wife among the cheering crowd’. In the closing pages, the Joker is in power after defeating the bat-woman candidate, and the new reality of America is ‘a kind of radical untruth: phoniness, garishness, bigotry, vulgarity, violence, paranoia, and looking down upon it all from his dark tower, a creature with a white skin and green hair and bright, bright lips’. The America between the romance of the Obama election and the vaudeville of the Trump era—and both will remain unnamed—is an unfinished argument over identity and the authenticity of truth itself, over the legitimacy of violence and the possibilities of individual choices. It’s the kind of place that provides enough ideas, both polarising and liberating, to power the actions imagined by a novelist who reads more than the crime pages.

Nero Golden and his children live to repudiate the past, and to create a new mythology in their adopted country, but Mumbai, city noir in sepia, will remain unforgiving

Along with the new president enters Rushdie’s hero—where’s he from, a Greek tragedy or The Godfather? –with an imperial Roman name. Every immigrant is an exile, so is the mysterious old tycoon Nero Golden, who comes to the new country with his three children, and they too have classical names: Petronius (Petya), Lucius Apuleius (Apu) and Dionysus (D). And it’s the story of these four, residents of the big house in the Gardens, an exclusive address in Manhattan, that René, their neighbour, and, in due course of time, their chosen Nick Carraway, tells in the style of what he calls ‘operatic realism’. They would live multiple lives, but most enchantingly, as characters in a future film by René. Golden and his children have left Mumbai after the terrorist attack on the Taj Mahal Hotel in which one of the victims was the tycoon’s wife. The Mumbai part of his life—the Sicilian flashback—is the story of an underworld ‘laundryman’ and the price of his silence and betrayal. One day, the metaphorical laundry will become fatally real at his Manhattan doorstep. They live to repudiate the past, and to create a new mythology in their adopted country, but Mumbai, city noir in sepia, will remain unforgiving.

Every Golden life is a novel by itself, and each one a tragedy set in the American dream. Golden pére, the foundation on which the House is built, loses its equilibrium the moment the beautiful Vasilisa from Siberia enters the old man’s life. The king becomes a prisoner of his golden legacy, and his disintegration comes after dramatic revelations and intimate sacrifices. The fall of the immigrant-exile, a fiery finale to an epic journey, is the end of an idea of life itself. ‘So I saw the darker flames, the black flames of the inferno, licking at the sacred space of my childhood, the one place in the whole world in which I had always felt safe, always comforted, never threatened Gardens, and I learned the final lesson, the learning of which separates us from innocence. That there was no safe space, that the monster was always at the gates, and a little of the monster was within us too, we were the monsters we had always feared, and no matter what beauty enfolded us, no matter how lucky we were in life or money or family or talent or love, at the end of the road the fire was burning, and it would consume us all.’ René, in yet another hyperbolic soliloquy, sums up the redundancy of superheroism and the enduring frailties of the ordinary.

America is still being reborn in Rushdie’s mind. Everyone is at home here, whether he is a Lapsang-drinking master of the universe or an artist vexed by the question of identity, the Joker in power cannot be the end of the dream

All the Goldens, in their exceptional ways, were on the road to their private inferno. Petya, the autistic loner, after one wild party, is a pastiche Gatsby on the verge of a nervous breakdown. At other times, he is the secret genius at work, creating internet games, and all the time wracked by a sense of romantic unfulfillment, his world a curtained room of bright computer screens. Apu, the abbreviated name a homage to Satyajit Ray, is non-Petya, brothers divided by America: ‘If Petya arrived in New York as the heavy-drinking polymath who was afraid of the world and found living in it a constant hardship, then Apu came as the sober romantic artist and promiscuous metropolitan, flirting with everything that was visionary yet with a clarity of vision that allowed him to see people plain, as his portraits showed: the panic in the eyes of the fading dowager, the vulnerable ignorance in the stance of the ungloved boxing champion, the courage of the ballerina with blood in her slippers like the Ugly Sister who cut off her toes to squeeze her foot into Cinderella’s glass shoe.’ Apu is what Petya is not: ‘A gluttonous agoraphile, and came to be thought of as a magic creature, an escapee from a fairy tale, though nobody could say for certain whether he was charmed or doomed.’ The contrast instils in the elder brother a fratricidal hatred. D, the youngest, is the outsider, within the clan and inside his own body. The narrator quotes Adorno to capture D’s plight: ‘The highest form of morality is not to feel at home in your own home.’ Or in the entrapment of your biological self. Liberation, though, is not a quiet act in a classical drama.

Not when it’s told by an intellectual narrator who has a movie name or scene to drop for almost every dramatic occasion in the Golden saga. In a typical passage, this is how the character mourning D’s death appears in René’s words: ‘In the gravity of her mourning solemn Riya reminded me somehow of Winona Ryder, not the wacky teenage Goth Winona of Beetlejuice, dancing in the air to a fine Belafonte calypso, shaking her body line, but rather Age of Innocence Winona, tightly controlled and less innocent than she looked. In the Scorsese movie—I confess I haven’t read the Edith Wharton novel—it’s Michelle Pfeiffer who is the unconventional one, the one who embraces a new, modern way of being and suffers terribly for it and is finally defeated by Winona Ryder’s serene conservative maneuvering.’ It’s not exhibitionism; it’s celebration. ‘The Golden House’, the title of René’s first feature film, and whose characters are drawn from the lives he is intimately associated with, is, after all, built on the Golden State of our time, though currently held hostage by the Joker. It is dream chasers such as Nero from faraway fairy tales—or nightmares—that make this place golden. The immigrant has never been an outcast in America, and it’s not history, but the mythology of popular culture that makes it the most popular idea in the imagined nationhood. Rushdie is a newly minted American citizen, but America is still being reborn in his mind. Everyone is at home here, whether he is a Lapsang- drinking master of the universe or an artist vexed by the question of identity—the Joker cannot be the end of the dream.

‘Humanity was the only answer to the cartoon. I had no plan except love,’ says the filmmaker narrative. It brings us back to Dostoevsky, who believed that beauty alone shall save the world. The Russian was reasserting his faith in the redemptive powers of imagination. So the cartoon terror too will be undone by storytellers. And this one is a survivor as resourceful as Scheherazade.