The future is remote and virtual. For better or worse? 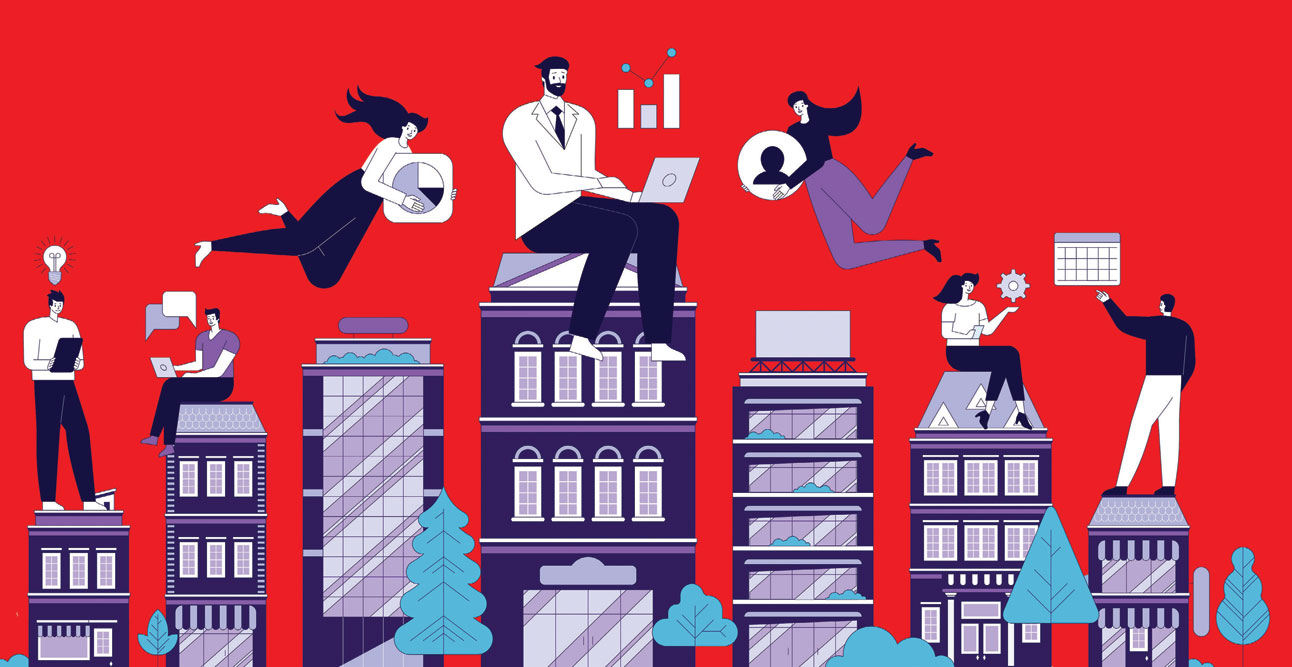 
In the peak months of the lockdown, I went and stayed in my native village in Kerala. There were other relatives who also came. A cousin from Mumbai who had a corporate job. The house was a mini-experiment in work-from-home and one that was thousands of kilometres away from our places of work. It seemed to go without hurdles and as the months rolled on, the ecosystem became a completely natural arrangement. I saw my cousin hunched over his laptop almost the entire day, a relay of online meetings with his team and clients. If anything, the amount of work he did appeared more than the ordinary. A recent article in The Conversation reported on a survey in the UK that found that this wasn’t unusual. As they noted: ‘In our survey during the pandemic, we found that 54% of employees increased their working hours under lockdown. What has been established over many decades is that rather than emancipating the worker, technology frequently leads to an intensification of work. We found that 60% of new homeworkers had an overall increase in work demands during lockdown, 51% felt constantly under strain and 50% found a blurring between work and life.’ What they couldn’t tell for certain was whether it was the technology that was doing it or because the office itself was putting greater pressure on workers. Despite the load, people preferred this new mode and wanted to keep it going. The article said: ‘Our research with eighty interview participants in Spring and Summer of 2020 and almost 1,400 survey participants, indicates that not only do people want to keep having some of their working week at home, but that they are also happy to video conference with homeworking colleagues from the office.’

That was 2020’s ironies of work in a nutshell. Meanwhile, we all returned from Kerala as the lockdown’s extremes were lifted. Nothing much had changed for work though. Offices still did not insist on attendance. In Mumbai, the suburban trains were still not operational. My cousin, out of volition, goes a couple of times a week on his bike to his office. When he went looking for shared homes to rent, there were three and five BHK flats that were empty and he could thus have all of it for himself for the time being at least. Working from home had found a new incentive to be convenient. Not just employees, many companies, especially bigger ones in services, like the new model. Why would they not? A friend who works in a tourism-related multinational saw the firm drop half their space. They had laid off a substantial percentage of their employees. They permitted the remaining ones to work from home too. They were cutting costs on two fronts, salaries and rent. Those who survived the bloodbath weren’t complaining, at least they had a job. Numerous companies, especially the small and medium enterprises (SMEs), just gave up on an office entirely because it was money going down the drain when there was no cash coming in.

The new year thus comes with the realisation of the office as a non-necessity. Sectors like Information Technology will continue to make merry because their work is overwhelmingly not dependent on physical presence. According to a survey of more than 1,000 chief information officers (CIOs) across the world by Enterprise Technology Research (ETR), a market research firm, remote working, or those who operate away from the office, will double because companies have found that productivity has increased. A Reuters report on the survey points out: ‘The survey said information technology decision-makers expect permanent remote work to double to 34.4% of their companies’ workforces in 2021, compared with 16.4% before the coronavirus outbreak, a result of positive productivity trends. About 72% of their companies’ total global workforce is currently working remotely, according to the CIOs. Of the more than 1,000 CIOs interviewed for the survey, 48.6% reported that productivity has improved since workers began working remotely, with only 28.7% of respondents indicating a decline in productivity. IT divisions in telecommunications, financials and the insurance sector reported large productivity boosts, whereas there has not been much benefit in energy, utilities, and education sectors.’


Working from home would have to be the norm, except where essential. Manufacturing needs boots on the ground, for instance. But every sector, or even segments within a sector that do not need physical presence, will likely continue remote work

The first half of the year is predictable across sectors because vaccine delivery will only reach a sizeable percentage of the population by then. And working from home would have to be the norm, except where essential. Manufacturing needs boots on the ground, for instance. You can’t assemble a car from your home. The shooting of a movie needs actors before a camera with the crew doing the other functions. But every sector, or even segments within a sector that do not need physical presence, will likely continue remote work. Or companies might come up with middle-path solutions. A Wall Street Journal forecast on the US real estate market, in an article titled ‘Covid-19 Vaccine Outlook Prompts Businesses to Dust Off Return-to-Office Plans’, expected lasting changes to work culture and said: ‘Working from home and other remote locations, which became a necessity during the pandemic, will likely remain a major part of the workplace, employers and real-estate executives say. Businesses that are highly competitive for top talent will likely begin opening small satellite offices in metropolitan areas and offering employees the option of working there, at home or in centralized headquarters—or a combination of the three. Design firm Gensler already is working with a half dozen Fortune 100 companies on such “hub-and-spoke” strategies, as they are becoming known in the office industry, said Joseph Brancato, co-chairman of the firm.’

Even though 2020 was the year when technology made online meetings much better, one of its disadvantages is that it is still being a poor replacement for personal interaction. But there might be already an answer to the problem in virtual and augmented reality. Companies are investing in technologies that make virtual meetings mimic the real thing. A couple of months ago, a US startup called Arthur Technologies launched a VR meeting app and even did their press briefing completely online over VR. It was far from perfect. A Wired reporter who attended it said: ‘Taking a meeting in Arthur requires a literal suspension of reality. You exist only from the waist up (hey, just like Zoom!), and your shirtsleeves taper off to reveal blue computer arms, which move according to how you move the Oculus Quest controllers in your hands. Your digital eyes are obscured by Matrix-style glasses, and a headset microphone covers your virtual mouth. This is because the technology can’t yet mimic facial expressions in VR, and “it’s better than looking at dead eyes,” says Arthur founder Christoph Fleischmann. My avatar looked nothing like me, except that it had dark brown hair.’ This is nascent technology, but what is waiting round the corner is clear. If everyone in a meeting is physically near even while separated by vast distances, it will make the onsite conference room even more redundant.

An offshoot of the lockdown has been a body blow to business travel, and that too does not look like it will resume in 2021 in any great measure. In Forbes, Dan Reed, a contributor who specialises in the travel and airline sector, listed why there wouldn’t be an upturn in the segment anytime soon. They included the fear of Covid still being dominant among companies and travellers, cost-cutting, and, with half the workforce operating from homes, who would the business travellers go to meet? He wrote, ‘When the Institute of Travel Management recently asked corporate travel managers around the world what they expect their companies’ travel plans and budgets to be for 2021, 38% of them said their businesses’ travel volumes will be down by 25% to 50% vs. 2019, the last “normal” year. Another 36% were even more pessimistic, saying their corporate travel would fall 50% to 70% from 2019.’

LinkedIn, the social networking platform for professionals, also came out with their predictions for the workplace in a blog. Virtual recruiting was one of the main points. ‘According to our latest Future of Recruiting Report, 81% of talent professionals agree virtual recruiting will continue post-COVID and 70% say it will become the new standard. Those are big numbers that can’t [and shouldn’t] be ignored,’ said the post. Some of the other predictions were companies being more concerned about employee well-being, and then there was virtual selling becoming a default option. The post added: ‘It wasn’t that long ago when virtual selling was the outlier—some sales professionals tapped into its power, while others relied heavily on in-person meetings. This year changed the game—not for one year, but for the long-term. Jonathan Lister, VP LinkedIn Sales Solutions, predicts virtual selling is the new rule. In 2020, we saw a secular shift toward virtual selling and that will only continue. In the years ahead, virtual selling will lead sales organizations and there will be greater scrutiny on the real value of face-to-face meetings.’

LinkedIn also conducted a survey in which they asked Indian professionals how they expected 2021 to be and over half expected their companies to do better in the year. And 40 per cent of them thought new jobs would increase. Which could mean the other 60 per cent were not so sanguine. What everyone can be sure of is that no matter what the year brings, it will be something that the world of work can negotiate, unlike what has just passed.