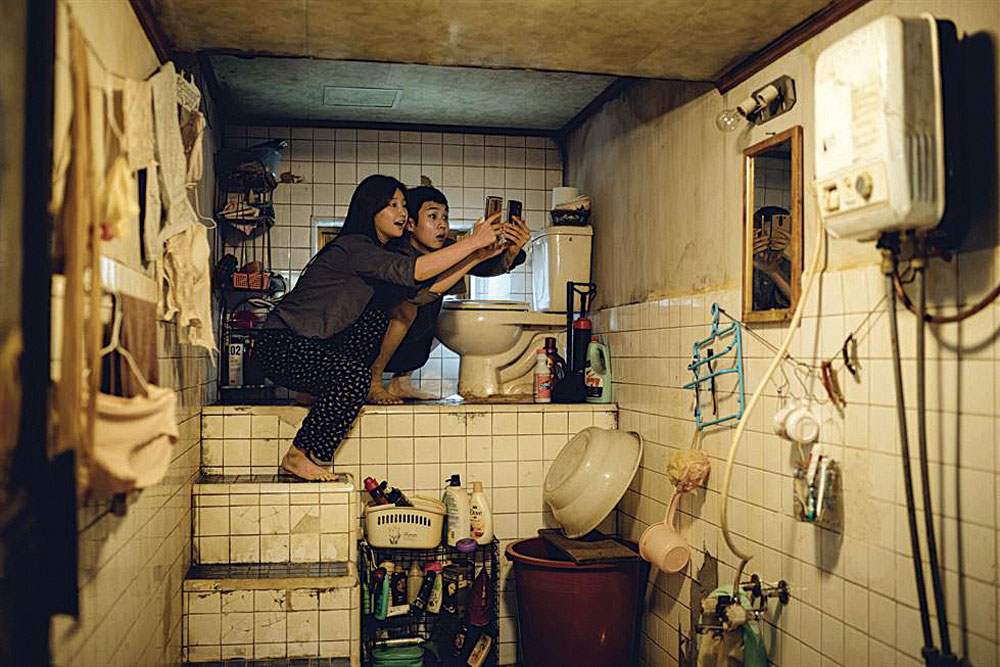 A scene from Parasite


LAST YEAR THIS time of the Oscar season, we were talking about a Mexican servant, a housemaid named Cleo, who brought a searing new sensibility with a pronounced foreign patois to Hollywood. The painted-to-perfection mise-en-scènes of Roma, in black and white, made memory a humanising adjective to a bad piece of Mexican history. As Alfonso Cuarón took the stage to receive the Oscar for the best director, he was the third Mexican in a row to be honoured at the highest altar of cinema—before him there stood Guillermo del Toro (The Shape of Water) and Alejandro González Iñárritu (The Revenant, Birdman). Subversion is cultural infusion, and it took genre-redeemers from across the border to turn the formulaic—whether it’s the survival saga or science fiction—into emotionally rich, structurally daring, dramas. Their conquest reminded us of the Eighties’ Latin American boom in fiction, with the trio of Márquez and Llosa and Fuentes in the forefront as retrievers of the lost magic of the novel. This time, the buzz is all about the South Korean auteur Bong Joon Ho, whose Parasite had already won Palme d’Or at Cannes, and now threatens to steal the Oscar night.

Bong is not a stranger, and he always added a dash of the West to his Korean fables, whether it was in the form of the actor or the co-writer or the plot twist. In The Host and Snowpiercer and Okja, all available on Netflix, the genre devotee was on full display, dazzled and provoked by Hollywood classics on apocalyptic thrillers and monster sagas and super animals. What elevates Snowpiercer from a post-apocalyptic horror ride to a non-judgemental, a quality Bong retains in his films otherwise accentuated by the sociology of class struggles in the age of art-house moralists, existential adventure is the filmmaker’s humanism. Like the Latin American magic in the end hits the hard terrain of reality in the novels of Márquez and others, the sci-fi adventure in Snowpiercer melts down to a tender parable of life, which is more real than the locomotion of class and revenge. In The Host, the rampage of a mutant monster fish becomes a Jaws re-imagined by a poet of love in a wretched world of lies and simulated fear. In that sense, Okja, the story of a genetically perfected pig, is King Kong modified for a less innocent time. Bong builds his monuments of unrealised love with the craft of a genre junkie and the art of a humanist unburdened by moral straitjackets.

Even by Bong’s own standard, Parasite is different. It begins as a social comedy, progresses as a hilarious clash of classes, reaches the denouement as a subterranean horror story, and ends as a Greek tragedy with a touch of the farce—and not to speak of an epilogue of reconciliation and resignation. And all this in a narrative of fluidity and sudden ruptures. The film opens with the ghettoised life of Kim Ki-taek and his family (wife Chung-sook, son Ki-woo, and daughter Ki-jeong). They face misery without losing laughter and the ability for mischief. It is the ideal family, united by dignity and the deceptions a stinking, infested life in the basement demands for survival. They become the most ingenious con artists in movie history when, one by one, they infiltrate the wealthy family of Park Dong-ik, his wife Yeon-gyo, daughter Da-hye and son Da-song. What ensues is, as Ki-woo would say, metaphorical. Such a classification of situations in a social thriller makes the characters free of their guilt; they, the losers, are the architects of their moral make-believe. No one is entitled to judge them. Metaphor is freedom, and Bong would make us believe, in life as well as in storytelling.

The Park mansion—its quietness and elegant emptiness, its manicured lawns and imposing isolation—itself is, to return to Ki-woo’s favourite word, a metaphor. It is also a necessary stage for the Kims and the Parks to deviate from the script of norms. The satirical turns savage when we realise that the Parks’ edifice has a telluric secret that is as subhuman as the world the Kims are desperate to flee. In the Bong universe, these worlds are set apart by body odour and cheap panties. And when they collide, the violence of it is balletic as well as farcical. The reality of unreal lives provides the drama in a Bong film.

What lingers is something else, something more enduring than the sociology of a cultural collusion. As in any Bong film, over-dramatised and at times overblown, chaos is followed by harmony, and savaged lives seek the calm solace of memory—and hope, even if it’s as flickering as Morse code. The last message that comes from the art of Bong Joon Ho is: cultural barriers and restrictions of language break down when cunning masters are at play. The parasite has ceased to be
an outsider.