Bibek Debroy has made a piece of our cultural heritage accessible 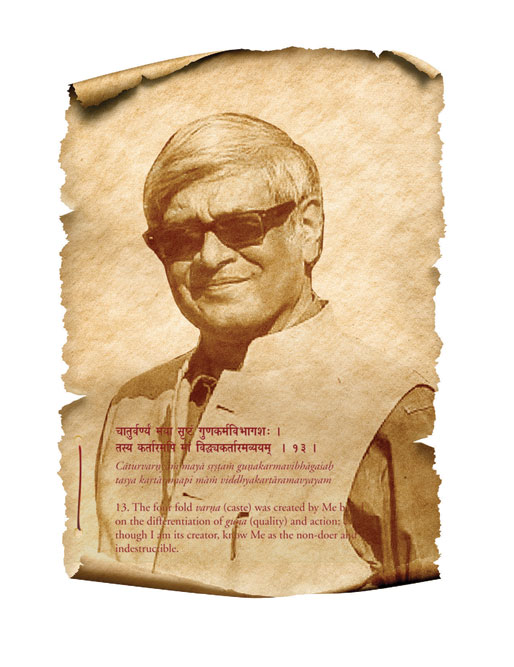 
ONE OF THE surpassing wonders of ancient Hindus is that they built astonishing monuments in verse.

Attributed to Krishna Dvaipayana, more commonly known as Veda Vyasa, the Mahabharata constitutes one such verse monument. The Bhandarkar Oriental Research Institute’s Critical Edition, completed after the death of its legendary general editor Vishnu Sitaram Sukthankar (1887-1943), having pruned what were considered repetitions and extrapolations, is still about 150,000 lines or 75,000 slokas long. Fuller versions extend to 100,000 slokas or 200,000 lines. Add the 18 Mahapuranas, also credited to Krishna Dvaipayana, which make up another 800,000 lines, besides other texts, and we have a staggering volume of verse ascribed to one human being.

Even if Vyasa is not a historical person or the single author of so many texts, exceptionally gifted and prolific individuals in our own times have actually produced astounding volumes of work by virtue of sheer genius and hard work.

The translation of the Mahabharata alone would account for 2.25 million words or 6,000 pages. Add the Valmiki Ramayana, Harivamsha, Bhagwat Purana, Markandeya Purana, Bhagavad Gita and selections from the Vedas and Upanisads totalling another 5,000 pages.

Now bring in dozens of more books in economics, polity, Indology, plus other than translations from Sanskrit. Not to forget the thousands of newspaper columns and daily limericks sustained over a number of years. The total might be in excess of 6 million words or 20,000 pages!

How can it be humanly possible to be so productive, that too with a full time job of national importance such as the Chairman of the Economic Advisory Council to the Prime Minister? I think I’ve given away the answer. Only a prodigy and phenomenon named Bibek Debroy can accomplish so much.

I could, of course, go on and on. But my subject is another, somewhat lesser known and therefore more enigmatic, man called Manmatha Nath Dutt.

This is precisely the question Debroy takes it upon himself to tease out in his new book just published by Rupa. The subtitle, Translator Extraordinaire, provides us a clue. For, if there is anyone who has an even more impressive record of translating from Sanskrit into English than Debroy, it is probably Dutt.

Dutt’s long list of translations includes all the above listed texts translated by Debroy. Plus the Agni Purana, Vishnu Purana, Garuda Purana, Mahanirvana Tantra, Manu Samhita, Parashara Samhita, Gautama Samhita, Kamandakiya Nitisara. Add several other authored and edited volumes on Hindu metaphysics, Ayurveda, the Buddha and so on. All this in less than 21 years, from 1891 to 1912.

Dutt also edited a journal called Wealth of India, ran a printing and publishing house, called Deva, then Elysium, Press, from 65/2 Beadon Street, Calcutta, and was founder of the Society for the Resuscitation of Indian Literature. In addition, he was the Rector of a school called the Keshub Academy and member of the Royal Asiatic Society.

So why do we know so little about Dutt? Why has posterity passed him by in so cavalier and careless a fashion? Debroy resorts to fascinating forensics to tell us. Which is why, at times, this biography reads like a detective story.

We don’t even know for sure when Dutt was born or when he died. Debroy says that the likely dates are 1862 and 1912, respectively. That means he lived for just 50 years. About his ancestry and progeny, we know a little more, although questions about the former remain. But Debroy establishes that Sucheta Kripalani, India’s first female Chief Minister (of Uttar Pradesh) and Acharya JB Kripalani’s wife, was his granddaughter. Dutt was also related to Netaji Subhash Chandra Bose from the latter’s mother’s side.

But why and how did Dutt translate so much? According to Debroy, it was not only to earn a living, but also to acquaint the world with the authentic accounts of Hindu religious and philosophical texts. In his ‘Introduction’ to Gleanings (1893), Dutt’s explains his purpose: ‘The Hindus and their Religion are the most misunderstood thing in the modern world. The civilized people of the Western World labour under the notion that the Hindus are a people a little better than the aborigines of Africa and their Religion is not better than the grossest form of idolatry… This is an attempt to popularize the Hindu Literature, Philosophy and religion among the Western nations’ (Debroy, p 30).

Bankim Chandra Chatterjee, writing under the pseudonym ‘Ramachandra’, said in his rebuttal of William Hastie’s diatribe against Hindu idolatry, that it is better to go back to original Sanskrit sources to understand Hinduism: ‘Let Mr. Hastie take my advice, and obtain some knowledge of Sanskrit scriptures in the ORIGINAL. Let him study then critically all the systems of Hindoo philosophy… Let him not study them under European Scholars, for they cannot teach what they cannot understand; the blind cannot lead the blind’ (Debroy, p 29).

But Dutt realised that that was not possible for many. There was no escape from English translations. Debroy, in his ‘Introduction’ to his monumental 10-volume translation of the Mahabharata into English, agrees: ‘Familiarity with Sanskrit is dying out. The first decades of the 21st century are quite unlike the first decades of the twentieth. Lamentation over what is inevitable serves no purpose. English is increasingly becoming the global language, courtesy colonies…rather than the former colonizer. If familiarity with the corpus is not to die out, it needs to be accessible in English.’

What does this dependence on English make us? A translated nation?

Even if we don’t like the sound of it, our very survival as a civilisation depends not only on originals, but also on translations. For many, it is through translations that we can reconnect with originals. Translation, thus, becomes a means of reviving our self-understanding. Unlike in Dutt’s times, today we translate as much for ourselves, for fellow Indians, as for the rest of the world.

Why is it important for Indians to translate our own ancient texts rather than outsourcing the job to foreigners? Because our own translations are less alienating and more culturally contiguous than those of non-Indians, no matter how accurate or linguistically up-to-date the latter might be. The svarajist position vis-à-vis translation is to develop a new universalism that is the flowering of the national impulse, not the flight from it into dislocated cosmopolitanism.


If there is anyone who has an even more impressive record of translating from Sanskrit into English than Bibek Debroy, it is probably Manmatha Nath Dutt

A good deal of the vivaad on anuvaad, therefore, remains vapid and unproductive. In the Indian polyphony, a multiplicity of originals and translations jostle for interpretive and critical attention. As Gayatri Chakravorty Spivak, in her ‘Translator’s Preface’ to Of Grammatology, puts it: ‘Derrida’s theory… would likewise admit—as it denies—translation, by questioning the absolute privilege of the original… Any act of reading is besieged and delivered by the precariousness of intertextuality. And translation is, after all, one version of intertextuality… If the proper name or sovereign status of the author is as much a barrier as a right of way, why should the translator’s position be secondary?’ (p lxxxvi).

This scenario prevails especially when the original is lost or irretrievable, as in hundreds of texts available only in translations. The example of Gunadhya’s Brihatkatha readily comes to mind. Reputed to have been written in Paishachi or Bhutabhasha, the original has been lost forever. Only its Sanskrit adaptations remain. This also applies to texts that shift shape across cultures. The originals are forgotten or left behind. Only translations persist, which in turn assume the status of original texts.

That is why India’s multilingual literary map is made up as much of translated as original monuments in words. It is this bountiful and bewildering richness that shapes the Bharatiya Kavyapurusha, or to change the metaphor, the Kavyaprakriti of Bhavani Bharati.

We are eternally beholden to great scholar-translator-savants such as Dutt and Debroy for facilitating this recollecting of our dismembered linguistic, literal, cultural and civilisational pasts.