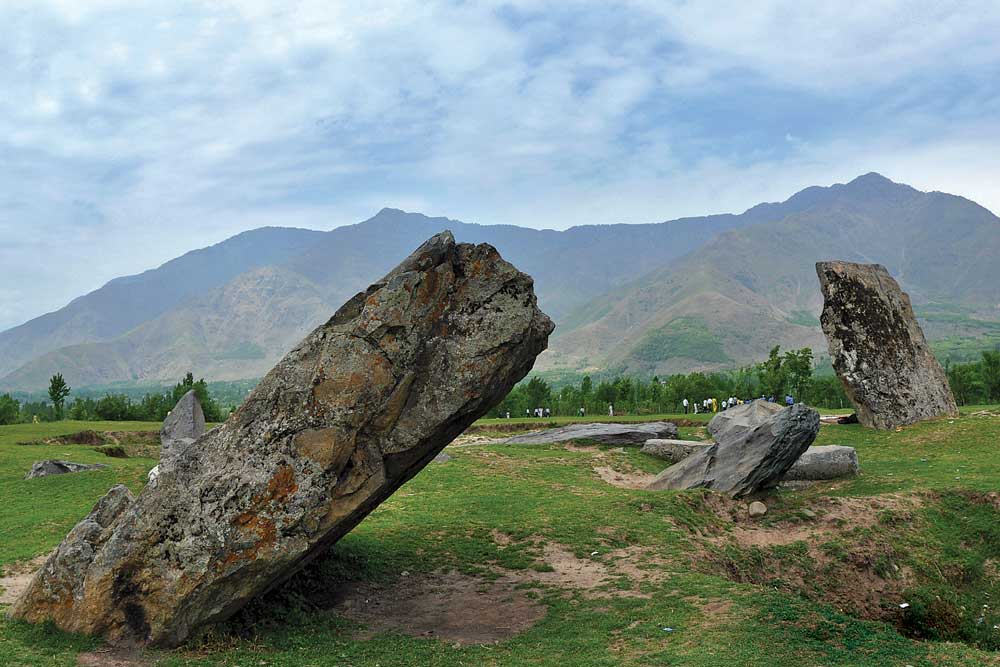 SAY ‘KASHMIR’, and most people would reach for images of stone-throwing teenagers and harried soldiers. Every other aspect of life has been eclipsed by the protracted violence. Or been devalued as insufficiently urgent by comparison with the fight-to-the-death between the State and militant groups. For many of us, the first, instinctive, tragic response on hearing a Kashmiri place name is to locate it on a list of towns and villages associated with some horrible atrocity, some act of brutalisation. Such a list of place names would not—thankfully, not yet—feature Burzahom (Burzahama), 16 km northeast of Srinagar, and Gufkral, near Tral in the troubled Pulwama district.

These names are infused with the region’s deep history. ‘Burzahom’ enshrines burza, from the Sanskrit bhurja, the birch tree, on whose bark some of the earliest extant Vedic manuscripts were written. ‘Gufkral’ is, literally, the ‘potter’s cave’, and we recall that the kröjü, the potter’s wife, played a pivotal role in the Tantric chakra puja or wheel ritual. These sites—along with others such as Begagund, Hariparigom, Jayadevi-Udar, Olchibag, Pampore, Panzgom, Sombur, and Thajiwor—are associated with quite another period in Kashmir’s long history, and stones other than those pelted by protestors in the streets of Srinagar and Anantnag.

Burzahom and Gufkral are among the oldest Neolithic or New Stone Age sites in South Asia. They are remarkable for their ‘pit dwellings’, underground homes protected by wooden roofs, adapted to cope with highland winters. In time, these were superseded by mud and brick structures. From the archaeological evidence, these Neolithic Kashmiri communities had domesticated sheep, goats, cattle, dogs and pigs. They cultivated wheat, barley, lentils and peas. To my dismay—I enjoy my goshtaba— they greatly reduced their meat diet towards the end of the Stone Age.

As toolmakers, these ancient Kashmiris excelled in the variety as well as the quality of their tools, made both in stone and bone. Their stone tools included polished axes, pestles, querns and chisels. Their bone tools included fishing harpoons, sewing needles, and hunting daggers. Among the finds at Burzahom and Gufkral were pieces of pottery, steel grey and dull red, brown and buff, some mat-pressed, indicative of a weaving practice. These range from early handmade ware to later, more sophisticated wheel-turned bowls and high-necked jars.

The details tell an astonishing tale. A female skull with holes drilled into it furnishes evidence of an early surgical procedure, cranial trepanning. Uniquely among South Asia’s Neolithic cultures, when members of the communities at Burzahom and Gufkral died, they were buried with dogs, deer, wolves or ibex—spirit companions for the journey into the afterlife, or sacrifices to propitiate its guardians.

Neolithic Kashmiris were not geographically isolated. Among the most compelling discoveries at Burzahom were two pots: a red-ware pot containing 950 carnelian and agate beads, and a slipped orange-ware pot painted with a black horned figure. The beads had self-evidently originated in the regions that are today Rajasthan and Gujarat, and which, in the 3rd and 2nd millennia BCE, lay in the Harappan zone of influence. The orange-ware pot most likely came from their near-neighbours at Sarai Khola near present-day Rawalpindi. Among the stone- tool repertoire of the Neolithic Kashmiris were ‘harvesters’, rectangular stone knives with several holes on the blunt edge. While such harvesters have not surfaced at any other Neolithic site in India, they have been found at the Chinese Neolithic site of Yang-Shao. The beads, the pots, and the harvesters point to the transregional circulations of trade in which Kashmiris participated between 4,000 and 5,000 years ago.

Neolithic Kashmir holds a lesson for us. It invites us to liberate ourselves from the tedious macro-myth of the Aryan (non-) invasion

Neolithic Kashmir holds a lesson for us. It invites us to liberate ourselves from the tedious macro-myth of the Aryan (non-)invasion, which commits us to establishing, variously, that Aryans came from the Steppes or originated in India, or that Harappans spoke a form of Ur-Tamil, or that Harappans and Vedic Aryans were the same folks. Meanwhile, we forget that the Indian Subcontinent had far more to offer during the same period, roughly 3000-1000 BCE. While the Aryans were invading Harappa (or not) and the Harappans were escaping into the peninsula (or not), South Asia was alive with human settlements that were relatively autonomous of these developments. The Burzahom and Gufkral communities were not alone. They had contemporaries: communities that had settled, among other locations, at Mehrgarh (Baluchistan), Swat (Khyber-Pakhtunkhwa), Koldihwa and Mahagara (Uttar Pradesh), Chirand (Bihar), Barudih (Jharkhand), Golabai Sasan (Odisha), Hallur, Brahmagiri, and Maski (Karnataka), and Paiyampalli (Tamil Nadu). Shockingly, this vast spread of Neolithic cultures across South Asia goes unnoticed.

In obsessing over the horse-drawn chariot, the Dancing Girl and the Great Bath, we ignore our Neolithic heritage. We disregard the visceral survival dramas and technological adventures that accompanied the shift from the hunter-gatherer lifestyle to pastoralism and agriculture. We miss the divination of terrestrial rhythms, the reading of the stars that made cycles of sowing and reaping possible, the experiments that produced crop rotation, the seasons of hunger and satiety. We miss the harnessing of clay and fire, the refinement of beam and divot, the shaping of trap and spear-shaft, the little artisanal revolutions that, to this day, sustain South Asia’s impulses of design and ingenuity.

We also miss occasions of quite literally stellar historic value. I am thinking of the art object that the archaeologist BM Pande describes, in the title of his 1971 paper, as a ‘Neolithic Hunting Scene from a Stone Slab from Burzahom, Kashmir’. Pande writes that this is the ‘first indubitable example of Neolithic art in India’ and ‘appears to be the only authentic evidence of Neolithic art in India with a definite chronological horizon’. The action of this rock engraving is clear, yet enigmatic. Accompanied by a dog, a male archer and a spear-wielding female bring down a stag. The scene is presided over by two 16-rayed solar disks, which Pande ascribes to Neolithic sun-worship. More recent research—by the astrophysicist Mayank Vahia of the Tata Institute of Fundamental Research (TIFR), Mumbai, and his colleagues Hrishikesh Joglekar and Aniket Sule—indicates we might be looking at something else altogether.

In 2006, these researchers advanced the substantiated claim that the Burzahom rock engraving is the world’s first representation of a supernova, a giant exploding star. Proposing that the ‘rock drawing is the record of supernova HB9’, which exploded in 4500 BCE, they argued that the other disk is the moon, the two celestial objects appearing of equal magnitude at the time. Then, simulating the positions of the northern constellations for that long-ago moment, they demonstrated that the ‘stag’ is Taurus, the ‘hunters’ are Orion and a figment of what we call Cetus, while the ‘dog’ is formed from stars belonging to our Andromeda and Pegasus. If Vahia and his colleagues are right, the Burzahom tableau is the world’s oldest sky map.

Unfortunately, none of this will help Kashmir’s Neolithic sites. Despite assurances from previous governments, Burzahom has no site museum. The finds made by the Archaeological Survey of India between 1960 and 1971 were taken away to Delhi and Kolkata, and never returned. Although Burzahom was identified for ‘tentative inclusion’ on UNESCO’s prestigious World Heritage Sites list in 2014, no action followed. And all the while, the living assert their demands against the claims of the dead. As archaeologist Mumtaz Yatoo observed sadly in a recent interview with Athar Parvaiz, “The site is encroached on all sides, roads are laid through the middle of the site by our government in contravention of the Ancient Monuments and Archaeological Sites Act. It’s ironic that the site we are so proud of is reduced to a T20 cricket ground.” (Kashmir Observer, June 13th, 2018). If Burzahom disappears under asphalt and concrete, Kashmir in particular and India at large will have lost an invaluable part of their heritage.