The Wreckage Beneath Trumpism

The failure of mainstream conservatism has made the rise of Trump possible. Have the evil-busters ever noticed? 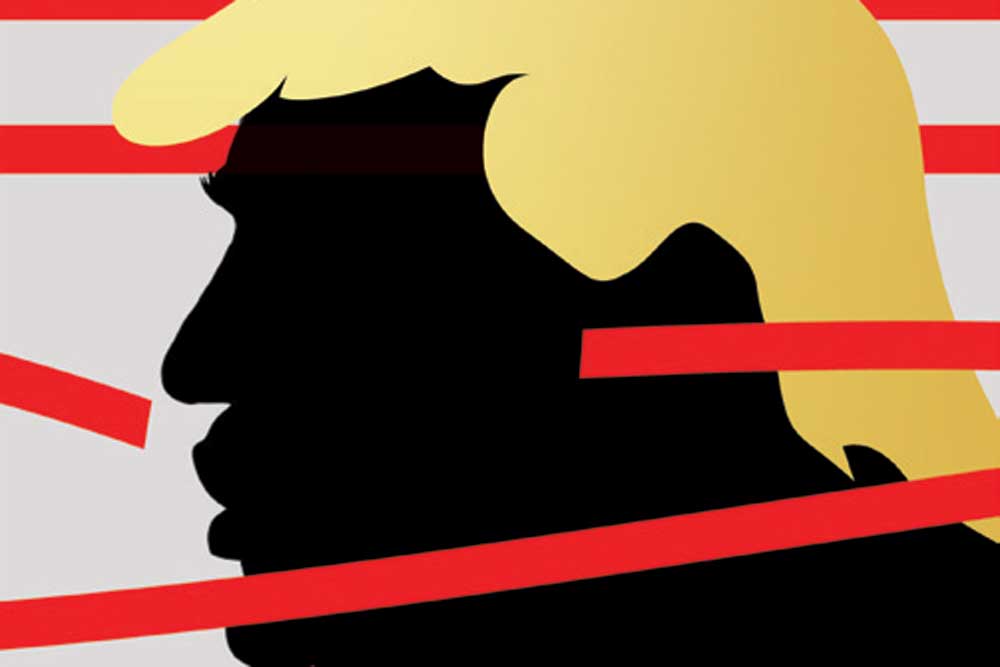 THE EXISTENCE OF evil is a moral requirement in politics—or so it seems in the age of Donald Trump. How this man has soared so high, defying gravity, asks the outraged. And the man himself, reading the mind of evil-busters in the media and in his own party, loves playing up his bogeyman side, forcing all the good men of America to seek the meanest of adjectives. Candidate Trump must be waking up every morning only to realise that, even as his poll ratings rise to alarming levels, he is the single cause of America’s shattered idyll.

Is it then Weimar America today? Is it the story of a delusional, righteous native harvesting the deepest fears of the volk? Is it the age of the paranoid all over again, the enemy multiplying in his mind? It could be more than all of that if we are convinced by the verbal war against the witchcraft of Trump. And it has to happen in America, the freest of lands, and the world’s largest economy—and also at a time when the unemployment rate is at its lowest and the country is not at war. A wonderful place as long as the non-Trumps miss the great deception at work. It takes a fearmonger—always an über patriot—to take the complacent to the reality of the enemy lurking within: the Muslim, the immigrant, the Mexican… Trump is delighted at being what he is in the eye of the beholder. He is convinced that bad reviews by his country’s Brahmins are inevitable for a show as elemental as his.

Still, the Trump schlock is getting increasingly predictable. It is also immensely educative in a world where the market value of the politician, one who plays by the worn-out book, is at an all-time low. Trump’s exaggerations, his bluntness, his rawness, his bad jokes, his nativism and all those hate speeches sell because simulated decencies and anodyne moralism have only added to the trust deficit in politics-as-usual. The alternative, though, is provided by the new kind of apolitical politician. There was a time when such liberators came from the world of ideas and imagination; they set themselves against the lies of ideology and won. The stakes were higher then. Today, freedom fighters come from the recesses of resentment; they come from a realm untapped—and unseen—by politicians, whether from the Left or the Right, caught up in the predictabilities of the mainstream.

They are the outsider-liberators pitted against the Establishment, which nowadays rhymes with entrenchment and entitlement. They make a moral system out of home truths too unpleasant to be uttered by Establishment politicians. The outsider-liberator draws his appeal from the inadequacies of others—from the cynicism of mainstreamers. Here is the perfect example: Hillary Clinton continues to fail the trust test despite massive endorsement from the Establishment. She runs for the US presidency aided by an impressive biography. Eight years ago, one man’s life story, with its racial and cross-cultural infusions, was to become a nation’s destiny. Today, the backstory of Clinton—First Lady, senator, presidential contender, secretary of state—is formidable but still not inspiring, and hardly mobilising. In the popular narrative, it is a story of opacity and triangulations. She is more a necessity in liberal America—you are duty-bound to support her to ward off the evil—than a phenomenon, which happens to be Trump. She bags the endorsements for not being Trump. The old virtues of transparency and honesty are back in currency, and they are qualities people seldom find in Establishment types.

Trumpism sells for other reasons as well. It is the new third way as both the traditional Left and Right have lost their argument in a world where new constituencies are won not by ideologies but by ideas. The failure is visible on either side of the Atlantic. The cracks in American conservatism have been getting wider since the Reagan years, and it has deviated considerably from the classical path by courting a shapeless future and forsaking the here and now. A misreading of the present became an even more dangerous trend at a time when the wealth gap was getting bigger. This was a paradox of globalisation unnoticed by the mainstreamers: the vigorous creation as well as movement of wealth did not make an equal society. The conservatives did not make people happier. They made people angrier. This can be said of the traditional Left too, certainly in Britain where the Labour party’s White working class has been appropriated by UKIP.

What we call resurgent nativism is partly propelled by the liberal West’s refusal to be realistic about terrorism and immigration. There is hardly any ruler out there today who will dare to add the most obvious religious adjective to terror. It is the movement of people that has made modernity easier in countries such as America, and that historical memory cannot be an excuse for romanticising one of the biggest human crises the West is faced with today. When the mainstreamer becomes an escapist, the outsider steps in. Call him Trump or whatever. As we magnify the evil, we refuse to see the biggest political failure of our time. Beneath the so-called perversities of the alternative lies the squandered idealism of the mainstream.