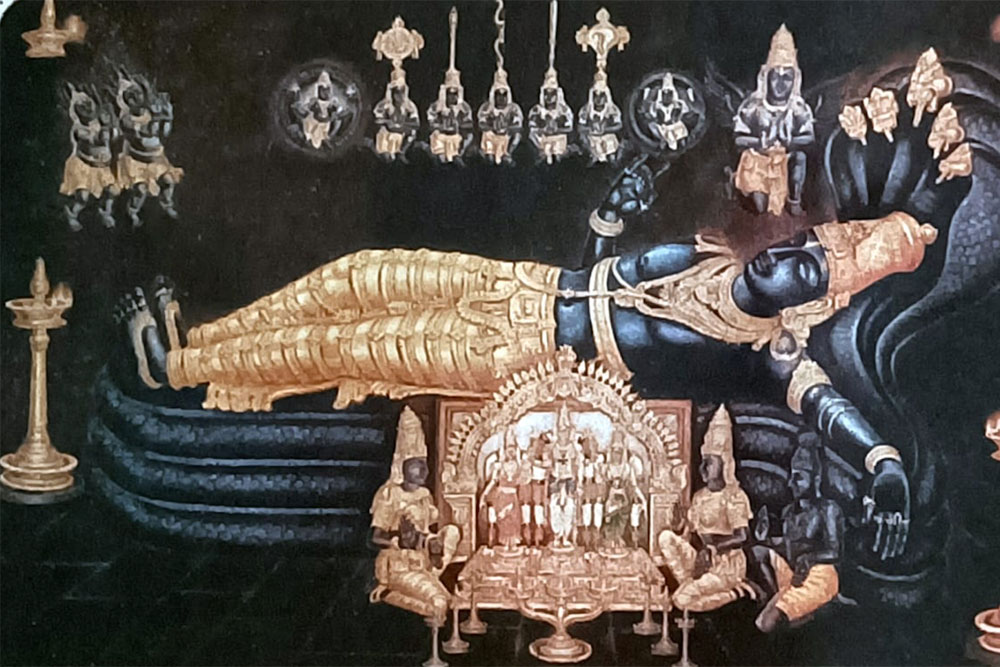 The physical world is comprehensible to human beings as they grow into childhood from infancy.  A new born becomes more and more aware of the sensory perceptions as it grows. Its world expands. At some point in our biological state of growth we become gradually aware of searching for something beyond this tangible world. The first thought that leads a human being into the study of the invisible, omnipotent Being is his first foray into philosophy.  That which he seeks through the means of philosophy is God.

We as human beings have a strong tendency to group together.  Groups are formed due to commonality of interests.  Men have gathered together to fight predators; feed themselves and their loved ones from time immemorial. Building a shared place to celebrate the remote, all-powerful Creator would have resulted in the construction of the very first temple many thousands of years ago in our land. The temple would be a special place where Divinity was the priority and was consecrated through appropriate rituals as a place of worship. Human beings also have a natural instinct to adorn their surroundings.  All art arises out of an imperative need to spread conceptions of beauty, whether it is visual or aural. Temple art, which is so much in abundance across our country, has its roots in this.

Shri Adi Keshava Perumal temple, in the water surrounded village of Thiruvattaar is one such place. Indians are known for their lack of written records. The Vedas and Indian classical music were passed on from Guru to pupil through generations, creating what is possibly one of the most venerable institutions, the parampara. Ancients saw to it that the paramparas were unbroken rivers of knowledge, which would richly irrigate the psyche of the society.  The advantage of the lack of written record was the development of an amazing memory.  The disadvantage of this, of course, was the lack of tangible proof of the antiquity and scope of the knowledge expounded by our sages. Such a situation gave rise to the erroneous categorization by colonial occupiers of much of Indian history as myth. The only mute witness to our undoubtedly wonderful past is the intricately constructed buildings which have survived the ravages of time.

In the Indian tradition, there were precisely prescribed methods of worship for each deity and in each temple. Shri Aadi Keshava was Shri Maha Vishnu.  He lay on three coils of the divine serpent Anantha. They represented the past, the present and the future. The demon Keshi was invincible.  He was bound in the bonds of Anantha.  Shri Maha Vishnu was atop. Shri Aadi Keshava has one hand held up in the “chin” mudra. His left hand dangles free. It is only when a lotus sprouts from His navel as the abode of Brahma the Creator that He becomes Shri Padmanabha, the One who has the lotus in His navel. The deity at Thiruvananthapuram is He. As He has a Shivalinga under His palm, the whole bhaava in the sanctum sanctorum is that of the Shrishti Shayya, or the bed of the entire process of creation, preservation and annihilation.

Both deities are made of the highly esoteric Kadusharkara Yogam. A virtual skeleton is made of Karungali wood. A complex amalgam of materials is put on it, layer upon layer, spread lovingly not by the touch of hands or a brush; but by mango leaves. Much of the materials have to be sun-dried and powdered before being put into vats of medicinal liquids called kashaayam. This continues until most of the liquid is absorbed into the solids. The Kashaayam-soaked materials have to be dried in the sun once again. Then they have to be grounded into a paste or liquid. This was done during the recent revival of ancient tradition at Thiruvattar in July this year by none other than Brahmamangalam Kailasan, the son of the legendary Brahmamangalam Subramoni.

Very unusually, there was a long wooden box full of materials to be found in the house of the Manalikkara Mathur family, one of the hereditary Thanthris of this temple. Shri Kailasan carefully curated a list of materials used for the Thiruppani, the repair work of the original Moola Vigraham. This is the Kadusharkara idol, which is more than 412 years old. It was Shobhana Antharjanam, wife of Shri Mathur Subramaniaru who took exquisite care of everyone connected with the Divine work of restoration of the Shri Aadi Keshava Perumal temple, and who, immediately after the work was completed, passed on.

The Mahabharata war mentions an individual called “Perum Chothru Udayan”. He did not choose to take sides with either the Kauravas or the Pandavas. On the other hand, he opted to feed both sides impartially. Thanks to her expertise in culinary art, Shobhana was immediately christened Annapoorneshwari, which is the name for the Goddess of food. In the sacred city of Varanasi it is reputed that Shiva takes care of the dead, while Annapoorneshwari does the same for the living by nourishing them. 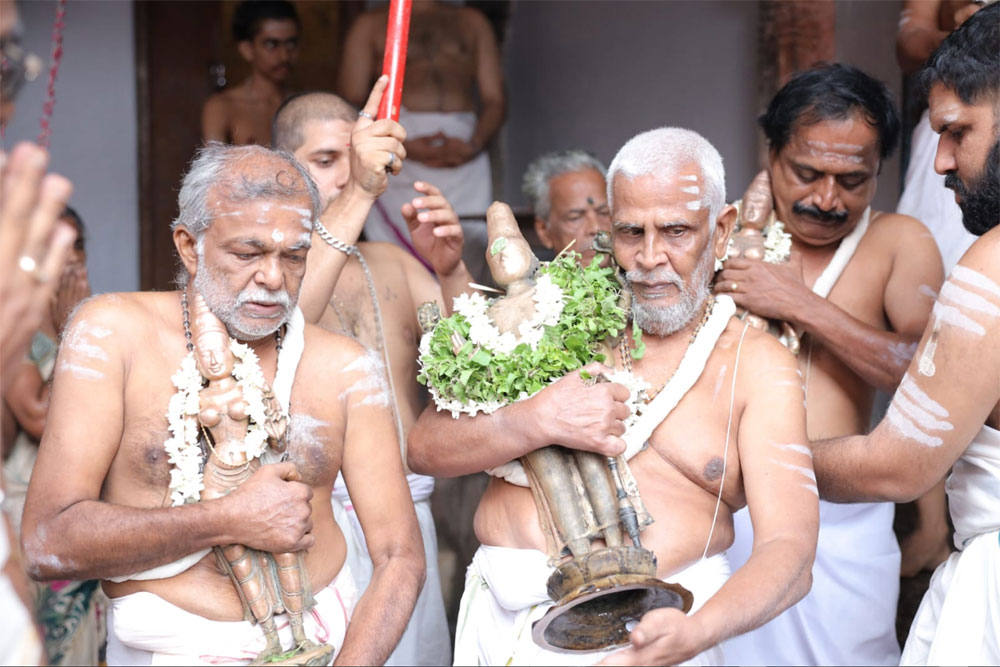 From the 28th June, food was arranged in the temple premises for all. Almost on cue, through the food she prepared again and again, our beloved Annapoorneshwari would have reached the heart of Shri Aadi Keshava.  It was almost as if she was born to feed Shri Aadi Keshava Perumal’s devotees. Once her work was over, she was undoubtedly gathered back into Him, something that was nevertheless harsh on all of us who adored her.

The work on the ancient Kadusharkara Moola Vigraham was done in adherence to ancient tradition. Thanks to the late Shri Vezhaparambu Brahmadattan Tirumeni and his younger brother, Vezhaparambu Chithrabhanu Tirumeni.  Again the parampara of vastu experts was not broken. It is Shri Mathur Subramaniaru who was always present with Shri Kailasan’s team in the Shrikovil every time work was carried out. This was the physical aspect of the restoration.

The spiritual and esoteric aspect was still left to be done. Shri Madhu Pandit Dasa, the head of Bangalore Hare Krishna, was generous enough to renovate the Thiruvambadi Krishna Shrine within the temple walls as well as to procure a 70 feet long teak wood tree to be used as the dhwajam or flagstaff, a must in temples of concentrated Divinity together with 16008 Salagramams. The dhwajam was also covered with gold. A collection of just 12 Salagramams worshipped properly has the strength of a maha kshethra. It was Kuzhikkatt Vasu Bhattathiri who was responsible for getting people who were not just familiar but experts of the rituals needed to be performed to reinstate the deity physically and esoterically to its former glory. It was Satish Ezhuntholil Bhattathiri who was there to put the deity into the Baalaalayam or the “little shrine” where He stayed for the period of the work from February 2016 to June, 2022.

The concluding festival is called  Kumbhabhishekam in Tamil Nadu where the Shri Aadi Keshava Perumal temple is situated.  There was a disagreement among the officiating thanthris and the poojaris about the rituals to be followed here. Naveekaranam simply means to renovate.  This refers to the physical repair that was carried out. Naveekarana Kalasham is a very different thing altogether.  The deity was consecrated in ancient times by Shri Vilwamangalam Swamiyaar. A lost chapter of the Brahma Samhita was found here. There are references of Shri Balarama, elder brother of Shri Krishna visiting both the Shri Padmanabha Swamy temple and Shri Aadi Keshava Perumal temple, as He went on a pilgrimage during the Mahabharata war.  Shri Balarama was upset as that war was between his pupils. He wanted to distance himself from that battle where kin killed kin.

Naveekarana Kalasham involves the invocation of the energy from the deity and then re-consecrating it back. To do this, one had to have the spiritual stature of  Shri Vilwamangalam Swaamiyaar.  The older, more experienced and wiser thanthris suggested the Dravya Kalasham rituals be performed here. This was to leave the original power of deity untouched. The Dravya Kalasham would just increase and enhance the existing energy of the deity. Naveekarana Kalasham was not favoured by the late Shri Vezhaparambu Brahmadattan Tirumeni, who strictly forbade this to be performed in both  Shri Aadi Keshava Perumal temple and Shri Padmanabha Swamy temple. Most of the thanthris had come and I quote Shri Kuzhikkat Vasu Bhattathiri who did a marvellous job of roping in all these great priests of our time. “Everyone was ready to come for the sake of Shri Aadi Keshava and then Maniappan ( this was the nickname of Shri Mathur Subramaniaru  ) in that order.”

It was Dr Kannan of the Tamil Nadu Devaswom Board who had expedited matters in double quick time, including the permission to do repair in the very Garbha Griha of the temple which was its most sacred space. The Tamil Nadu government swung into action as did the Dewaswom Board and some 1200 police personnel were put on duty.

Shri Manoj Thankaraj was the minister from that constituency. He is a Christian.  There were some sections of society who went to court to keep him out of the temple premises as he was a “non-Hindu.” The way the minister behaved all through the Kumbhabhishekam as well as during his visit to the temple was exemplary. He as well as Shekhar Babu, the HRNC minister of Tamil Nadu, witnessed the majesty of the Kumbhabhishekam on a rain washed dawn, along with lakhs of devotees in rapt attention.

Police inspector Abdul Sheikh turned vegetarian for the period of the festival as he shared idlis and sambaar in Shri Vijaykrishnan’s house.  Shri Velungudi Swami whose discourses are famous also stayed in Shri Vijaykrishnan’s house which served as a 24/7 canteen for Shri Aadi Keshava Perumal’s devotees. Inspector Sheikh had walked the concentric perimeters of the temple barefoot for 12 days to ensure security as well as the facilitation for the teeming devotees, some of whom were standing in line since 3 in the morning.

Shri Sheikh was not comfortable entering the temple after eating non-vegetarian food and hence changed his dietary preferences for the duration of the restoration of the temple after 412 years to an ancient tradition This was social sensitivity and sensibility at its best, something that should not be allowed to be a diminishing factor in the traditionally inclusive society of our ancient land and its timeless tapestry of heritage.

There are many who fulminate against persons of other faiths on social media. The fact that such a festival happened over such a long period of time, and that efforts made by so many of differing faiths were sustained successfully throughout is living proof of the Grace of Shri Aadi Keshava Perumal.