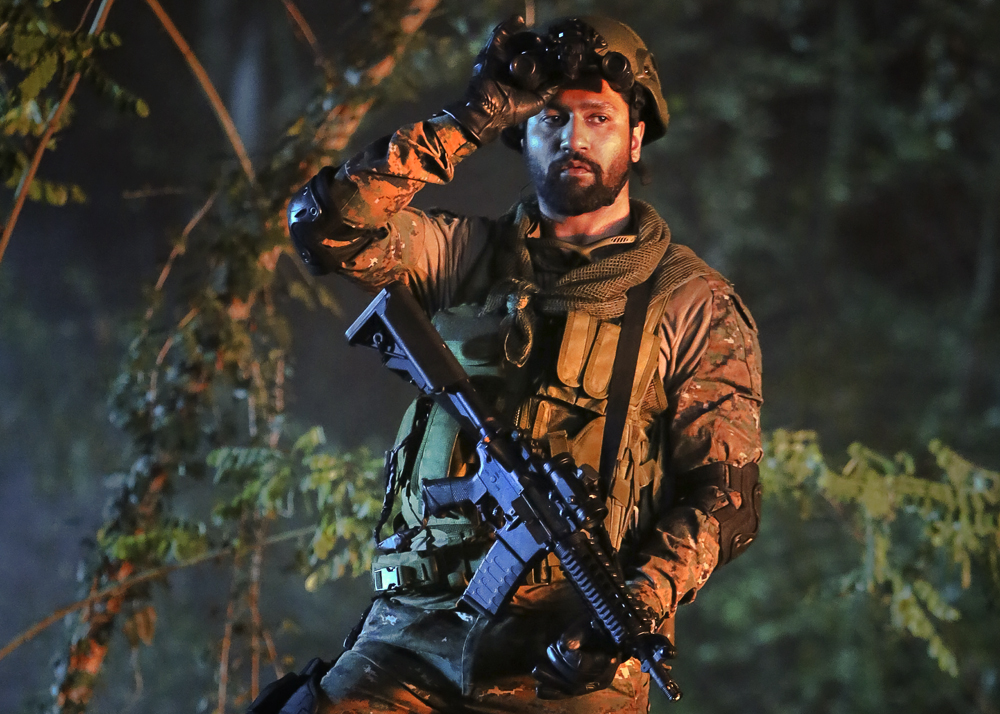 It is clear that a surgical election is imminent in India. The patriotism and nationalism that this movie triggers will only impact an audience for a few weeks. The film is made well, with high production values and realistic battle scenes, but the theatrical release of such an action film has a limited shelf life.

In the first few scenes, the film elaborates, in great detail, acts of terrorism in Manipur and Kashmir, and describes the consequent death and destruction as a striking example of the victimisation of an entire nation. The argument goes that rogue elements in a belligerent state may have conducted these attacks, but that same state is involved in sponsoring those strikes on our border. ‘Uri: The Surgical Strike’ begins by building up a polemic that refuses to accept intimidation by such attacks. It then suggests carefully planned retaliation.

The American film, ‘Zero Dark Thirty’, about the manhunt for Osama Bin Laden, was a thriller based on military and civilian intelligence that finally led to the go ahead from the Obama Administration on the raid inside Pakistani territory that eliminated the al-Qaeda leader. The heroine and the heroes in that film were Intelligence specialists and army men on the ground, not the President or his National Security Advisor. Which is as it should be. But it is quite the other way around in ‘Uri: The Surgical Strike’. The whole concept and planning of the strike inside POK (Pakistan Occupied Kashmir) is shown as the brainchild of Govind Bhardwaj, a character based on Ajit Doval (Paresh Rawal). He has the ear of a most accessible Prime Minister (Rajit Kapur) who hangs on to his every word. The people in the PMO are portrayed as decisive politicians who merely have to communicate their thoughts to a willing and battle ready Indian Army.

Writer and Director, Aditya Dhar, has clearly watched classic American military films in great detail. The combat scenes, their setting, the ambience of men and their arsenal in a hostile environment, the crisp verbal communication, the inclusion of tough women in combat (Kirti Kulhari), all this and more is derived closely from such watching. Even certain ‘uplifting’ lines that enhance combat melodrama, and give serious war films a ‘lighter’ touch are included. In one scene in ‘Uri’, a young intern has designed a drone that clicks photos and looks like an eagle in flight. The ever present Ajit Doval character notices the young man and checks out his remote controlled GPS fitted ‘eagle’. Impressed with a test flight, and deciding that the ‘eagle’ can be used effectively in a surgical strike, he tells the young inventor in English: “you may just have won us the war, son”. Indians don’t speak like that, but no matter – in an American inspired film, they do.

The Indian Army has Major Vihan Singh Shergill (Vicky Kaushal), and he certainly is a great asset in a surgical operation to knock out the terrorists who conducted, or were connected with, the URI massacre. He looks the part, and seems to have worked hard at training for his role.

So the film is slick and impressive; not so the politics. Too much of the credit for the success of the mission is taken by the decisive men portrayed, all close to the Prime Minister. Too many military details of the operation have been revealed. Even though the shooting was a re-creation on foreign shores, it is obvious that the Indian Army have given the production crew detailed information on the conduct of the strike to enable them to reproduce it accurately.

Though a watchable film, ‘URI: The Surgical Strike’, is too much a work of pre-election propaganda.