The Politics of Costa-Gavras

An encounter with the director who made Z, a political thriller set in a mystery country that inspired a guessing game on its release in 1969 and has become a classic since 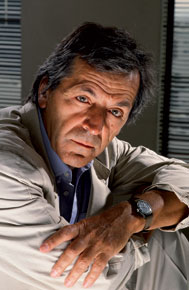 An encounter with the director who made Z, a political thriller set in a mystery country that inspired a guessing game on its release in 1969 and has become a classic since

The 1969 classic, Z, based on the 1963 assassination of a left-wing leader in Greece, Grigoris Lambrakis, by forces close to the then military, is an unusual film. Its characters speak French, though it is not set in France and no mention is made of where all of it is happening. Names go unspoken, and when they are brought up, they are just single names that one can’t trace to any place. In the case of two of its principal characters, the assassinated leader is referred to as ‘the Doctor’ and the judge investigating the murder is called ‘the Examining Magistrate’ throughout the film. The only clue that it is based on a true story is the somewhat confrontational disclaimer that flashes on the screen at its start: ‘Any similarity to real persons and events is not coincidental. It is intentional.’

The unusualness of the film, of not pinning the story or its people to a place despite being based on a specific incident in history, has given the film a universal flavour of sorts. This is perhaps one of the explanations of why the film has gone on to become so popular.

But as Z’s now 80-year-old director, Costa-Gavras, says, sitting by the poolside of a five-star hotel in Mumbai, that far from trying to broaden the film’s appeal, he had kept it anonymous out of necessity. Shooting it in Greece was impossible because of its military regime at the time, and French producers were unwilling to back him. “They said it was ‘too unconventional’,” he says, speaking in halting English and throwing his arms out to mimic disregard, “‘Too many characters.’ ‘No love story.’ And they were worried it would be called communist propaganda.” Eventually, once he’d found financers, the money was too little to shoot in France. The only option was Algeria, where it would be cheap to make a film and which was known to be hospitable to socialist fugitives. It meant having French actors speak in French, Algerian extras and a filming location that was neither France nor Greece—and best left unmentioned.

Costa-Gavras is in town to attend Mumbai Academy of Moving Images, a popular film festival where he was awarded a lifetime achievement award. He is wearing a light blue wrinkled shirt under a dark linen jacket and appears to be an affable individual.

Z made such an impact that many credit it with having invented the modern political thriller genre. The film secured two Oscars (Best Foreign Film and Best Editing), and became one of the most successful films of 1969. After Z, the director went on to make several controversial films. These include State of Seige (1973), which explores the US involvement in supporting repressive regimes in Latin America, Missing (1982), which was banned in Chile and depicted US machinations in this copuntry’s coup of 1973, and Amen (2003), which explores allegations that Pope Pius XII was aware of the Nazi Holocaust but did nothing to stop or condemn it.

“All my films,” he says, “if you look at it, whatever the issue might be, are about people. I am interested in telling people’s stories. About how powerful events affect ordinary people.”

Costa-Gavras was born as Konstantinos Gavras in Greece, in a region called Peloponnese, in 1933. His father fought as part of the left-wing resistance during the Nazi occupation of the country. After World War II, his father was viewed as a socialist radical, jailed and blacklisted. The family survived with Costa-Gavras and his mother taking on a variety of odd jobs to keep themselves fed. Later, when Costa-Gavras wanted to travel to the US to study cinema at a film school, he was denied a visa since his father had been blacklisted. Instead, he moved to study the subject in France.

A trademark of Costa-Gavras’ cinema is that however serious his subject matter, be it an assassination, a coup or even a genocide, it is never about just raising an issue. There is always an element of entertainment, a taut thriller or mystery, that lures audiences in.

The director smiles as he says, “We have to remember that watching a film is not akin to listening to a lecture. The film is a show, a means of entertainment. Yet entertainment and politics are not contrary to each other.

The best of films bring the two together seamlessly.”

In the 1980s, starting with Missing, Costa-Gavras moved to Hollywood. Despite having spent a successful phase there, his stay was brief. He has since returned to making French films. According to him, Hollywood has undergone so many changes over the years, he is unsure if it can make enough space for filmmakers like him. “Now there are zombies, big action films with exploding trucks and choppers. I don’t know if I can find work there. Also, I like to make films without interference.”

Speaking about how he insisted on working with a French crew and completing all post-production work in Paris for his first Hollywood film, Missing, he says, “Otherwise every week, we would get a studio executive in the edit room, asking what we had done so far and making suggestions. When I cast Jack Lemmon as the lead, they said, ‘Why Lemmon? He is a comedian.’ I had to fight to have my say. When he was nominated for Best Actor at the Oscars and the film did well, of course they were happy.” Missing, which takes a hard look at the US backing of the General Augusto Pinochet-led coup in Chile, also led to a lawsuit. The then US ambassador to Chile, Nathaniel Davis, unsuccessfully filed a $150 million lawsuit against the studio and Cost0-Gavras.

Films like Missing, however, constitute a phase in Costa-Gavras’ career when he was obsessed with the Cold War, its ideological conflict and aftermath. Over the last few years, the filmmaker has started looking at new subjects. In 2009, he made Eden Is West, a story of an immigrant in Paris. And last year, he made Le Capital, which is set in the world of international banking and hedge funds.

“The world was drastically different from the time I grew up,” he says, explaining his shift of focus, “In my time, it was the Cold War. When one of the blocs, Soviet Communism, disappeared, we all thought the world would become a wonderful place to live in. But that’s not true. There are new issues—of immigration, of capitalism. What’s the new villain of the modern era? It is money, greed, unchecked capitalism. As a filmmaker, I am drawn towards subjects of the day. I can’t think of retiring. Maybe when I make a lot of money, maybe when these issues disappear, maybe I will call it a day then.”

Like his film Z, an undertone of satire inflects Costa-Gavras’ mannerisms. Before our scheduled meeting, a Thai journalist was emptying out his bag’s contents on the filmmaker’s table to get his autograph on numerous posters he had in the bag. Costa-Gavras obliged without comment for almost 20 minutes as poster after poster appeared for him to sign. He did it unflinchingly, sometimes with a white marker, sometimes with a black one, and sometimes with both. At the end, as the journalist prepared to leave, the filmmaker extended his arm for a handshake and said with a smile, “Perhaps you should quit your job… and become a collector.”

Note: A correction was made in the article after it was published