Waves of revealing nostalgia wash over the filmmaker as he visits his school, the only home he knew in his childhood, for its centennial. 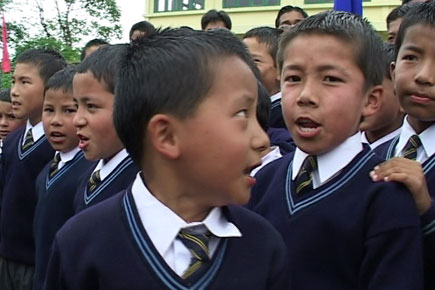 Waves of revealing nostalgia wash over the filmmaker as he visits his school, the only home he knew in his childhood, for its centennial.


We Homes Chaps, a film about revisiting an old school/orphanage in Kalimpong, called The Homes, for a reunion, directed by Nepali-Tibetan filmmaker Kesang Tseten, is the gentlest of films—still, reflective, slowly plumbing that pool of pain called childhood. As the filmmaker says at the start of the film among scenes of merriment and excited meetings between long-parted school friends: “a reunion is a time of heightened emotion—perhaps something more than nostalgia.”

In many ways this is a writerly film, maintaining the patient observation of a story that slowly yields its secrets, not hurrying to fix the meanings of things, though clearly searching for the complicated histories that lie beneath the seemingly normal stories of successful adulthood. As conversations wind in and out through the wetly green, mist-covered school grounds, we come to see how strongly the currents of political history have shaped stories of so much individual pain. For, even as people remember the alienation and loneliness, the fragility that is a part of each childhood, we begin to see that these memories also belong to a more fraught identity.

Many of the children who first came to the school were Anglo-Indians, born from the relationships between white men—often planters—and local women. With the coming of Independence, the men left these women and children behind, and having no means of their own, the women often sent these ‘orphans’ to The Homes, as the school is named. With time, other sorts of children joined, among them refugees of many kinds, including Tibetans, such as the filmmaker and his siblings. Many had no home to go to in the holidays or could not afford to go more than once in a few years, and were instead sent to stay with charitable families in nearby Calcutta.

These holiday families, which showed kindness but equally expected ‘good conduct’, the efforts of the school to ‘polish’ its wards into English-speaking models of discipline and achievement… these recollections coalesce to create a sense that these were children who ironically, given the school’s name, never knew what it was to be at home—not just in the material sense but not even in the sense of existing comfortably in a language or culture of their own.

The parallel with the project of building an Indian nation is not hard to draw—the idea of an ideal Indian citizen, readily found in government and Bollywood propaganda, which erases such diverse identities of language, caste, tribe, region and the crazy pain that has come with it all. The film never speaks of these sociological ideas overtly, allowing them to emerge through the narrative instead. Its concerns are philosophical: questions about the unfairness of life, the injustices of the past and whether there is a way to lay it to rest. As the conversations between the filmmaker and his old school girlfriend wonder: is it easier to just put the past behind or do we need to constantly rake up the painful memories to better understand them, to somehow exorcise the ghosts of the past?

Allowing these questions to radiate out of the heart of the film creates the political and emotional resonance that gives this story a larger meaning. Remarkable too is the surefooted work by perhaps the best documentary cinematographer in India today, Ranjan Palit, following exactly the emotional rhythm of the film, observing the emotions that flit through the eyes of a woman as someone else talks, filming the mist as if it is pregnant with sadness. His work is an example that beauty in a documentary frame comes not only from light and composition but from empathy.
Everyone should see this film at least once–and be prepared to weep not just for the lost childhood of The Homes’ chaps, but their own.