The movie is an amusing watch for the first hour or so, and then peters off, so to speak 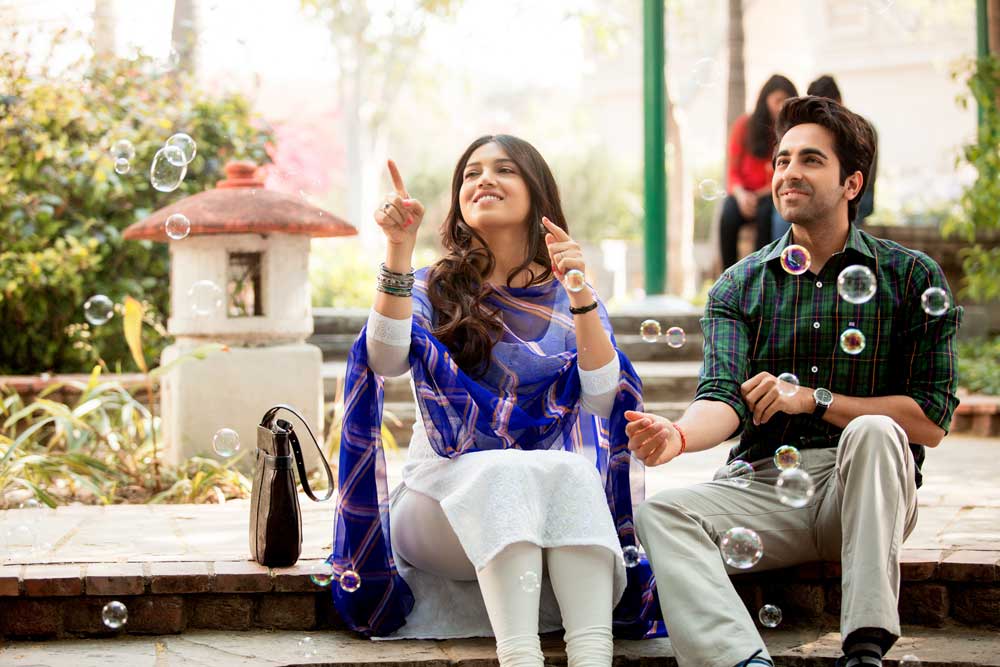 Before the marriage of her daughter, the mother of the leading lady in this movie is insistent that only Ali Baba should be granted entrance to the treasure trove of her daughter. She is most particular about the forty thieves being kept out. Unfortunately, she has neglected to give Ali Baba, her prospective son-in-law, the secret code, “Open Sesame”. Other more visual metaphors for the inability to deflower a girl on her wedding night, include a broken biscuit, soggy from being dipped in tea. A whole range of similar jokes are arraigned in this film about the failure of a man to perform on his debut, once the curtains of the stage are drawn.

It is an arranged marriage fixed through the internet, and we are introduced fairly quickly to the couple, seen before in a similar situation in ‘Dum Laga Ke Haisha’. Here, the same actors play Mudit (Ayushmann Khurrana) and Sugandha (Bhumi Pednekar), both of whom are granted a brief ‘get to know each other’ period by their parents, before the date of the wedding is set. One evening, after they have a vigorous kissing and petting session that does not, unfortunately, lead to a grand finale, Mudit confesses to his ‘gent’s problem’, as he euphemistically calls it. The news spreads like wildfire, and soon the parents, the friends, the two families concerned and, possibly, the whole colony gets to know about it.

The supporting cast is excellent. It has most of the usual suspects in the situational comedies of smaller budget Hindi movies, characters like the bride’s mother (Seema Pahwa), given as she is to reading out loud her jottings on the romance of her own wedding night, long years ago, during her tryst with Sugandha’s father. The claustrophobic interiors of the homes, the vivid description of the lack of privacy in the tightly knit communities of the bride and groom; all this comes through effectively. The inability of the couple to make either set of parents understand that sexual problems represent social problems, and that this aspect of their relationship can only be sorted out by the two of them when they are granted that privacy; this too is communicated well.

’Shubh Mangal Savdhan’ falters when all the comic possibilities in elucidating a man’s personal problem are exhausted. Once the litany of jokes and the myriad images of performance anxiety are done to death, there is nothing to sustain the plot. Like the other associative ailment of premature ejaculation, all the humour has been let out too quickly. This happens very fast in the second half of the film. Once the recurring question is posed – does Mudit manage to do it, or does he not – the film has to search for a fitting ‘climax’. This is found in the last shot of the movie – a TV screen with a recording of one of our rockets blasting off to outer space. Patriotism is clearly the last refuge of the sexually dysfunctional.

An indication that the makers themselves realise the inadequacy of plot devices to sustain the film arrives, when, after dragging the story along for about half an hour, they are obliged to insert a cameo – a guest appearance by Jimmy Shergill, who appears suddenly, out of the blue. Apparently, the actor is shooting a film on condoms, and Mudit is made to have a brief, meaningless conversation with him, as he brushes past him on his way to locate Sugandha.

‘Shubh Mangal Savdhan’ is an amusing watch for the first hour or so, and then peters off, so to speak.