Meher Vij has taken the film to a special emotional zone,  stealing the show from Zaira Wasim and Aamir Khan 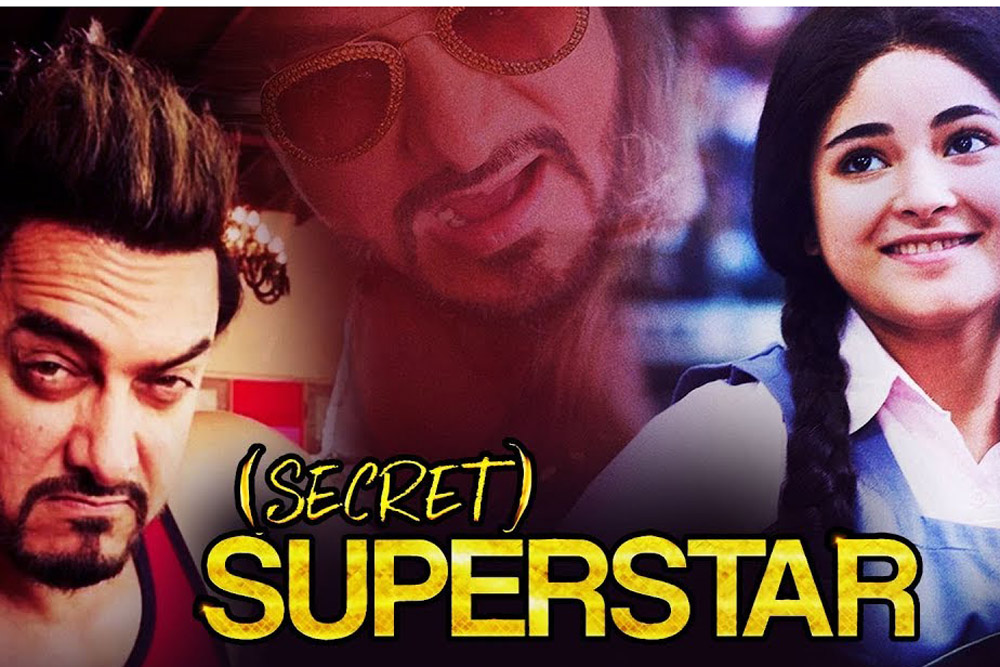 Originality has never been Hindi cinema’s forte. The Bill Murray starrer, Rock The Kasbah (2015), inspired from an earlier documentary called Afghan Star (2009), was about a down and out Rock Manager (Murray) who comes to Afghanistan, gets stranded there, and discovers a girl with a divine voice. He considers her his find, but the problem is that she lives in a conservative Muslim society that is likely to punish a woman who might participate in such decadent activity, and especially so if she sang on TV without a hijab.

By sheer coincidence Secret Superstar is about a Muslim schoolgirl in Baroda called Insia (Zaira Wasim), with a lovely voice, who is discovered by a controversial singer/ music director/ TV host in Mumbai called Shakti Kumar (Aamir Khan). She catches his eye and his ear when she uploads a tape of herself on YouTube, singing in a burkha, which then goes viral.

Shakti was apparently once a fine singer, but the system has turned him into a re-mix artist who sings for the faster pace of these times. Earlier, he used to compose and sing from his heart, but now he sings from his ‘body’. In this sensitive age of ‘me too’, he is also the perfect harassment artist, with arms, eyes and lecherous facial expressions that reach out to women of all professions, not just those in the music industry. The tabloids say that he is having affairs simultaneously with three women, his wife has won a divorce from him, and on one occasion we see him making eyes at such diverse ladies as the receptionist of the woman divorce lawyer of his ex wife. The one who won the case against him. When this lawyer happens to have a rare good word to say about Shakti, he interprets it mockingly as an invitation, opens his arms, and advances towards her like an octopus. “Don’t push it”, she says, and retreats hastily into her cabin.

Aamir plays this character satirically, and clearly has a great time doing it; what with the funky hairstyle, caricatured imitation of several real life musical ‘talents’, and with his own style of poking fun at celebrities who take themselves too seriously. It is quite funny, and his role, though not long, is the centrepiece of Secret Superstar.

But the bulk of the film is really about the singer, not the song. Insia’s family life is depicted as sheer hell; a Muslim, middle-class life in Baroda gone berserk. And if this sounds like a sweeping generalisation, then that is how it is shown in the movie. The father, Farookh (Raj Arjun), is a short tempered devil who loses his temper at the slightest misstep by his wife or daughter. We are told he has broken his wife’s arm because she forgot to switch off the geyser. We see scenes of him flinging food at his wife because there is not enough salt in it, rolling up his sleeves and beating her to pulp for a transgression, breaking the strings of his daughter’s guitar because he cannot abide by such frivolous activities, and forcing her to throw her new laptop out of the window.

Finally, Farookh plans to take his family to Saudi Arabia, and hints that he will get Insia’s nikah done there for good measure. Writer and director Advait Chandan has clearly ’Talibanized’ a middle class Indian Muslim family in order to extract an extra dose of drama from his story. He has succumbed to the stereotype syndrome, not of Hindi cinema, but of mainstream news media, and the ideological polarisation that it actively encourages.

However, ironically, what emerges from this depiction of a cruel patriarch who runs the lives of the women in his family, is an outstanding performance by Meher Vij, who plays Insia’s mother, Najma. She resists this authoritarian man with the kind of courage that is not dramatic, but rather more closely associated with a resistance movement; born of kindness, full of love and protection, and willing to suffer physical pain for a belief in the human rights of an individual.

Secret Superstar is paced a little too slowly as it begins, but once the school girl singer and the celebrity music director have played their parts, Meher Vij takes over and brings the film to a special emotional zone, something that was absent for most of the duration. Basically, she just steals the movie from Zaira Wasim and Aamir Khan.