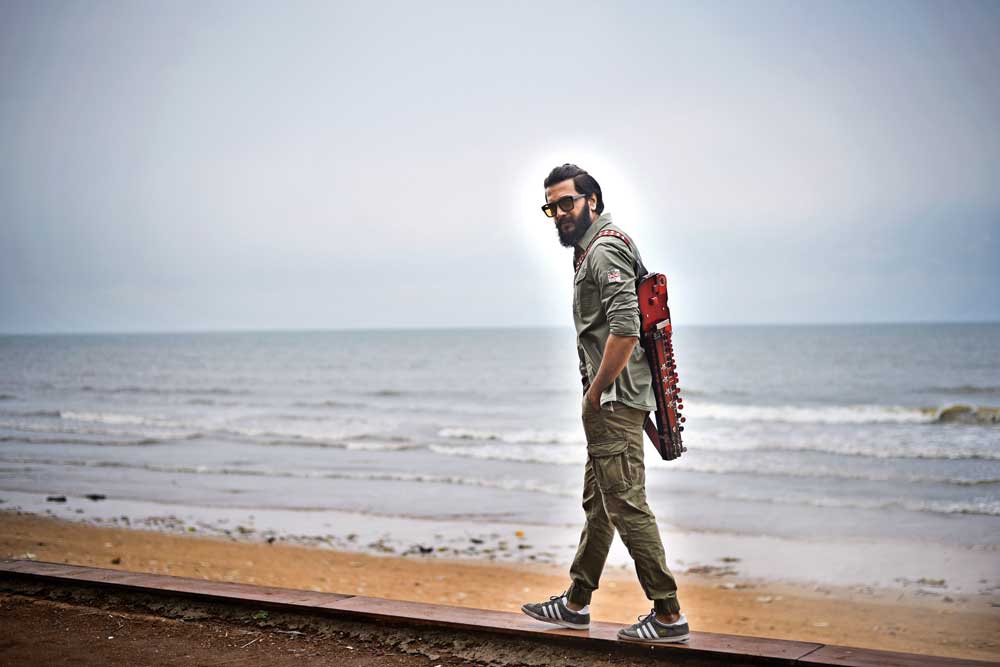 With every role an actor essays, you want to see a new facet of the artist which hasn’t been explored earlier. Banjo is that movie for actor Riteish Deshmukh. Long locks, overgrown stubble and chiselled body—he has given more than his 100 per cent for the film, even if the box-office has not taken note of his efforts. Perhaps this is because he has reached that stage in his career where he feels he can experiment with novel subjects.

When we meet him at the Novotel coffee shop in Mumbai, Deshmukh is dressed unlike any of his previous avatars. His hair is tied in a neat bun, he runs his fingers through his beard and twirls his moustache every now and then. His clothes are subtle but of the same colour. He is wearing army green pants and has teamed that with a ganji and jacket to match. “I am dressed more or less like Tarat, my character in the film,” he says. “While looking at him in the [film’s] promo, he may come across as a loud character, but when it comes to his dress sense, he is not. He will never wear jazzy colours. In fact, he will wear very subdued clothes,” he elaborates.

Deshmukh has had a long day with interviews, yet his excitement is unparalleled when we talk about Banjo. He appears to have connected with the script at an emotional level. “Banjo used to be a very popular instrument back in the day. Banjo players were one of their kind and they were very arrogant about the way they played the instrument because not many had mastered the art,” he says. He even studied banjo players and their lifestyle before going on floor with the shoot. His dedication is apparent in the film, as he plays the string instrument in quite a few sequences. “During my school days,” says the actor, “I was learning the Hawaiian guitar. It is similar to the banjo. So I knew the basics of how to play it. However, in the film I have added my own alterations and I have used a blade instead of plectrum to play it—in order to add more character to my character in the film.”

With Banjo, Deshmukh hopes that the banjo culture will be revived in Maharashtra and that its players get their due.

This is Deshmukh’s second outing with critically acclaimed Marathi director Ravi Jadhav. His first was with his home production Lai Bhaari (2014). “My equation with Ravi as an actor is better, because here I don’t have to spend money,” he says, jesting about his association as a producer with Jadhav during the former project. However, he credits Jadhav with getting into the skin of each character he writes and thereby helping him enhance himself as an actor. “I like how Ravi writes his characters. Also the research that goes into his work is just amazing. For instance, there is a scene in the film when one of the banjo players picks up money that is given to him with his mouth. This is a very common practice in Solapur and this is what Ravi had seen and he brought it to the table.”

One needs to keep discovering oneself. Only then can you convince your audience to accept you each time

Jadhav too is all praise for Deshmukh, saying, “With Riteish, he really needs to feel for the character and then he will give it his all.” Jadhav was also responsible for helping Deshmukh shift his focus towards Marathi cinema, which is seeing a renaissance of sorts. Many Marathi films have done well and have been critically acclaimed. Jadhav had also directed two such films—Natarang (2009) and Balak-Palak (2012). “Marathi cinema has had a wonderful phase during the last few years and I am only glad that Riteish chose to be a part of it and produced Lai Bhaari. It was a story which needed to be told,” he says.

Deshmukh’s career has undergone a complete transformation and seems stronger now than ever. He made his debut in K Vijaya Bhaskar’s Tujhe Meri Kasam (2003) opposite Genelia D’Souza, who he is now married to. A romantic comedy, it faired decently at the box- office, but it did not establish him as a solo lead. His true calling as an actor came when he started doing multi- starrers and tapped his comic timing. With movies like Masti, Bluffmaster!, Kyaa Kool Hain Hum, Malamaal Weekly, Apna Sapna Money Money?, Heyy Babyy, Dhamaal—he established himself as the go-to star for comic roles. “I enjoy doing comedy. It comes naturally to me. But that doesn’t mean that I do not do homework for each of my characters,” he says.

When a script is given to Deshmukh, he always asks the director a set of questions. The most important question is what kind of humour does a particular character have and what sort of jokes does he laugh at? “With these two questions you get to know the most about a character. And then you can prepare for it the way you usually do,” says the actor. Sajid Khan, who is a friend of the actor, and also his director in many films, is all praise for Deshmukh’s comic timing. “Comedy is a very difficult genre to perform. It is commendable on Riteish’s part that he has stuck to this genre and that too so successfully. With each film of his, he has only improved his comic timing,” says Khan.

I enjoy doing comedy. It comes naturally to me. But that doesn’t mean I do not do homework for each of my characters

Deshmukh, to begin with, did not have the conventional good looks which most heroes of Bollywood must possess. Nor did he have an acting lineage. He is the son of the late Maharashtra politician Vilasrao Deshmukh. He joined the industry purely on his passion for the craft. He polished his dancing skills and enhanced his comedy chops with each project. Such multi- starrers of the last decade as Housefull 2, Grand Masti, Humshakals have proved Deshmukh’s ability to make cinema audiences laugh.

Deshmukh’s biggest turning point as an actor came when he signed on Mohit Suri’s Ek Villain (2014). As the menacing villain in the film, he pulled off a role few thought he could. Suri, who directed the film, said in an earlier interview, “I wanted someone who wouldn’t look negative, yet with his acting would convince people to hate his character. Riteish did exactly that.” This helped Deshmukh establish his credentials as a thespian. This was followed by Lai Bhaari, his debut Marathi film, which won him many accolades. “As an actor, it is important to keep trying new things. One needs to keep discovering oneself, only then can you convince your audience to accept you each time,” he says.

The revival of Marathi cinema is also dear to him as a cause. His next two films are both Marathi, one of which charts the life of Chhatrapati Shivaji. “It is a difficult film, because it is an emotional subject for everyone in the Marathwada region. Also, it is history, which needs to be delved into with detail and precision.” But Deshmukh, like always, is willing to take up the challenge.