Dull and jingoistic, this film has nothing but a slick ending to flaunt 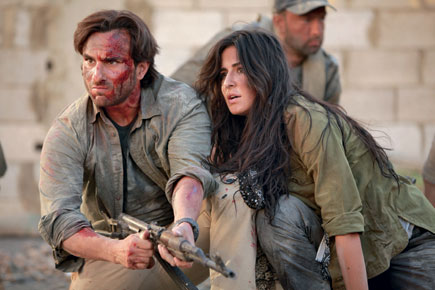 There are many uninteresting things about the movie Phantom, but one interesting thing about its director Kabir Khan. He is a political filmmaker who makes popular Indian cinema—a very difficult thing to do, because the audience reacts negatively to any political idea that’s not presented in black and white. Khan negotiates this space by giving you heavy doses of nationalism, but without losing his perspective on the human factor involved in jingoistic politics.

So though this film is about justice for 26/11 victims and the state that suffered the attack, the protagonist who delivers retribution is himself pretty flawed. Daniyal Khan (Saif Ali Khan), who is the ‘phantom’, an agent who does not officially exist in the roster of India’s Research and Analysis Wing, has no concern whatsoever for collateral damage when he executes his assignment of eliminating all the main actors involved in the 26/11 attack. He is a single-minded killing machine. He cannot even establish an emotional relationship with the one person he appears to like—the undercover agent he works with, Nawaz Mistry (Katrina Kaif). Daniyal, while on our side, is as dehumanised as the strategists of 26/11. While operating in Pakistan, Daniyal makes use of many individuals without any concern for their safety or survival, particularly in the case of an innocent restaurant waiter. The film maintains balance by showing terrorists behave in the same emotionally numb manner, and by portraying those on the other side—of the the Pakistani intelligence service, ISI—as similarly harried about their security and ruthless in the execution of their plans.

Indeed, the scenes in Pakistan are far better than those in London, Chicago or Beirut. Even if this movie is rather jingoistic and dull in the first half, it does race to the finishing line in some style.