Parasite at the Oscars 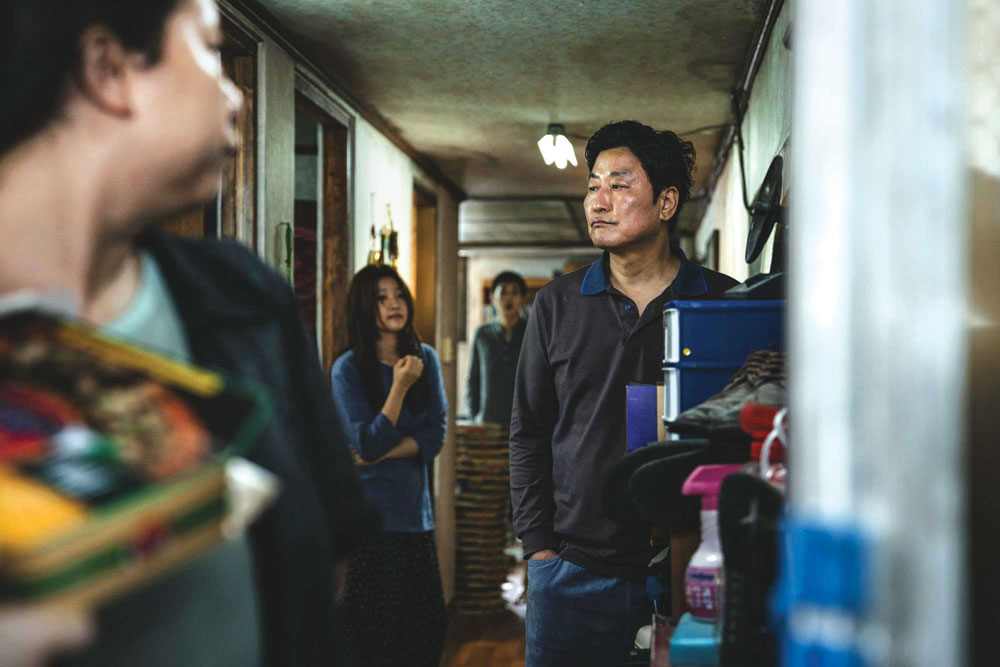 Director Bong Joon-ho after winning the Palme d’Or for Parasite (background) at the Cannes Film Festival on May 25, 2019


FOR SOME YEARS now, hallyu or the so-called Korean wave consisting of a wide variety of cultural products from melodramatic TV soaps and K-Pop to some very good films, have been lapping up on foreign shores and becoming something of an international obsession. A book—Han Kang’s bestselling The Vegetarian which won the 2016 Man Booker International Prize—had made for an unusual hallyu product. We now have a film, Bong Joon-ho’s Parasite, that’s has just booked a seat at the ultimate cultural high table, the Academy Awards.

Like Alfonso Cuarón’s Roma last year, this dark comic film has broken out of the Award’s Best Foreign Language Film box and picked up a slew of Oscar nominations, from that for directing, original screenplay, editing, production design, international feature categories to the prized Best Picture category. It ideally should have picked up acting nods too.

There has only been a handful of non-English language films to ever get a Best Picture nomination, and, except for Crouching Tiger, Hidden Dragon, none from Asia. By the buzz Parasite began generating all of last year, it certainly has a shot. Parasite was a crowd favourite at the Cannes last year (it picked up the Palme d’Or at Cannes, the first South Korean film to do so). Since then, it’s generated fawning reviews everywhere, won best foreign film at the Golden Globes a few weeks ago; and has won or been nominated for a slew of other awards.

And it has done what international arthouse phenomena rarely do, one even Roma couldn’t manage—become genuinely popular with the crowds. As AO Scott of The New York Times (NYT) wrote in his review of the film, it is ‘the kind of smart, generous, aesthetically-energized movie that obliterates the tired distinctions between art films and popcorn movies.’ It is already this year’s theatrically most watched foreign film in the US. According to NYT, it has earned over $US25 million. In comparison, South Korea’s last year’s entry for best foreign picture, Lee Chang-dong’s Burning, again another very good film, an adaptation of a Murakami story, which in turn was inspired by a Faulkner story, made only $719,000. Parasite is still some way away from the all-time record of Ang Lee’s Crouching Tiger, Hidden Dragon ($128m) or Roberto Benigni’s Life is Beautiful ($57m), but who can say how it will eventually fare once the Oscar buzz picks up.

If the ultra-violent Oldboy (after picking up the silver ware at the 2004 Cannes) first opened up international audiences towards Korean cinema, Parasite might cement that industry’s reputation. The film is essentially a genre-hopping upstairs-downstairs movie about class differences. It is in reality a bitter and pessimistic film but it is so encased in humour that it is difficult to realise the pill one is swallowing. You may root for the underdog, but like in real life, the underdog is not going to make it.

The film focuses on two families—the Kims, who live in a squalid house below ground level, and the Parks, who live elsewhere, in a luxurious house, but one (minor spoiler alert) which contains a secret basement. The Kims live by performing what we may call jugaad in India. They fold pizza boxes for a living, use their neighbour’s Wi-Fi, and when the road above their house is fumigated, open the windows so their house’s mosquitoes are exterminated. One by one, by forging documents and creating new identities, the Kims infiltrate the Parks’ household by becoming their servants. The son, Ki-woo, becomes a tutor to the daughter in the Park household. He in turn gets his sister to pose as an art tutor; the two then scheme together to get their father to replace the Parks’ driver; and finally, all three of them come together to plot the removal of the maid and get her replaced by the final member of the Kim family. The Parks are what we may recognise as the nice liberal elite, the types who are conscious of their privilege and speak respectfully to their help. But, the film will show, this is of course a mask, one perhaps their wearers don’t even know they wear. Wealth can afford luxuries, even of becoming nice. One of the characters will say in the film, Mrs Park is ‘nice because she’s rich’.

The Kims are the parasites. But in some moments, even the Parks appear to be so. In one scene, the Park couple arouse themselves by talking about drugs and cheap knickers used by the poor, as though they can only sexualise their lives by invoking elements of the working class. In the middle of the act, Mrs Park strangely whispers to her husband, ‘Buy me drugs.’


The term han–said to encompass a wide array of feelings such as anger, revenge, grief, suffering, resignation, longing and pain–became popular in the 1970s, as Koreans advocated for a kind of cultural authenticity, but its origins are older, from the Japanese occupation of Korea in the early 20th century

South Korean movies—and the book The Vegetarian—tend to have an aesthetic that is very distinct from Western films. Their best films are more contemplative, often slower paced, and at their hearts, they carry tender stories of love between partners or within families, themes that should be more easily identifiable to Indians. But they almost always contain a strong unrecognisable undercurrent of rage. A languid story moving peacefully will inexplicably explode into an orgy of violence. People will be hacked, decapitated, disembowelled, or hammered to death. In The Vegetarian, as simple a decision as that of abstaining from meat, will upend a character and her family’s lives, leading to rage and violence. For all the mirth and pleasantness of its earlier parts, Parasite also ends in violence. For a culture so steeped in values such as obedience, respect and good manners, these films are particularly shocking.

The Korean word han is often used to describe the type of rage portrayed in these films and books. A review of The Vegetarian in The New York Review of Books (NYRB) quotes the Korean author Euny Hong (in The Birth of Korean Cool: How One Nation Is Conquering the World Through Pop Culture) to describe the word as ‘a culturally specific ultra-distilled form of rage’ arising ‘from the fact that the universe can never pay off this debt [of unfair treatment of Koreans], not ever.’ The term (said to encompass a wide array of feelings such as anger, revenge, grief, suffering, resignation, longing and pain) became popular in the 1970s, as Koreans advocated for a kind of cultural authenticity, but its origins are older, from the Japanese occupation of Korea in the early 20th century. The NYRB article says, ‘Han is a sort of unique Korean national trait or spiritual condition—a characteristic rage against other people, enemies of the nation, or even history itself.’

But where does this rage come from? An NYT article which explores this idea of rage in Korean cinema—and finds its spread even across Japan and China—suggests that it might have something to do with the Confucian philosophy and its fundamental beliefs about obedience and respect and how these have been manipulated to create a highly unequal society. In Parasite, the arrival of an ornamental rock (supposed to be venerated in Confucianism) brings luck into the Kim family. Yet, the same rock later becomes a tool of violence. ‘Rage is a destructive emotion… but within art, it is also radical and, in rare moments, elucidating,’ the article reads. ‘The best of these films understand that the outcome of pitting people against one another can be violent, that it will invariably end badly. But they also understand that a repressive society can transform individuals into monsters.’

Last year, Roma came close to doing what no non-English-language film had done before. It entered the ceremony as the odds-on favourite, it made history by taking best director, but tripped up at the final hurdle of Best Picture. The cast and crew of Parasite, the millions who loved watching it and an entire generation of filmmakers across the world will be rooting for a different outcome this time.