This movie is so bad that an advertisement for an analgesic could be centred around receiving instant relief, post the screening 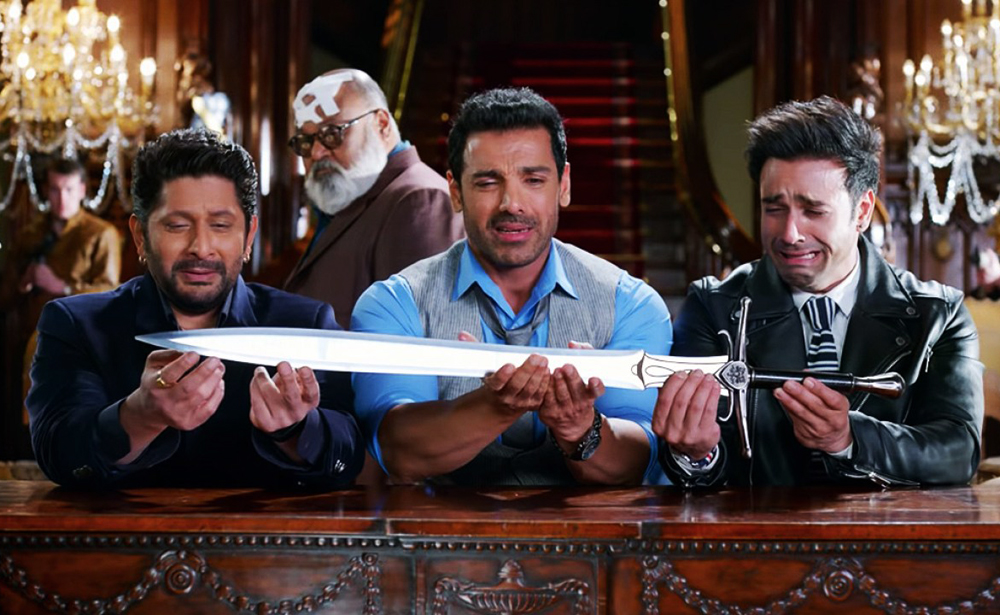 ‘Pagalpanti’ is a so called comedy about a man called Raj who is going through the ‘Sade Sati’ period of his astrological chart. This is the seven and a half year transit of Saturn across three zodiac signs, during which Vedic astrologers claim that the native has terrible luck. This bad fortune, it is said, not only affects the person, but also any enterprise or business associated with the individual.
For example, when he was back in India, Raj (John Abraham), got a job at a bank saddled with non performing assets. It collapsed at the instant of his recruitment. Now, in London, he starts a business selling fireworks, in partnership with his friends. The store catches fire, uncannily, with an accurately tossed cigarette stub. The shop, and indeed the entire market, is burnt to cinders.
Next, Raj starts a truck delivery service, along with his long suffering buddies (Arshad Warsi and Pulkit Samrat). This time they mess up on the transport of an expensive car to two Indian Dons, Raja Sahab (Saurabh Shukla) and Wifi Bhai (Anil Kapoor). To indemnify the extensive damage caused to the car, they are forced to enter into the gangsters’s services, working as food tasters at their dining table, and decoy targets in their convoy of cars. Apparently, rival hoodlums and financiers are out to assassinate Raja Sahab and Wifi, the latter named so because of his poor connectivity.
Raj and his friends are expendable, but what with the effect of ’Sade Sati’, all employers of these gentlemen are in danger too. The plot thickens, and then curdles. The movie turns into a series of gags in a wild goose chase across England, all of which are spectacular, but none funny. One episode has the characters stuck together with instant glue. Another has an Indian financier in London called Niraj Modi, played by Inaamulhaq, a dead ringer for the fugitive Indian businessman, Nirav Modi. A third has escaped lions from a zoo interrupting a slugfest and shootout.
‘Pagalpanti’ ends up as a nonsensical parade of heterogenous ruses yoked together incompetently. Nobody is funny in the movie, least of all John Abraham, who, after a decent set of recent performances like ‘Romeo, Akbar Walter’ and ‘Batla House’ has associated himself with muck once again.
This movie is so bad that an advertisement for an analgesic could be centred around receiving instant relief, post the screening.