Tautly paced, with little room for sentimentality, this is serious cinema about being brown in post 9/11 America 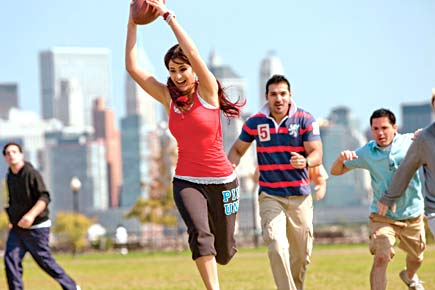 Tautly paced, with little room for sentimentality, this is serious cinema about being brown in post 9/11 America


It’s a relief to watch a good, serious Hindi movie shot in New York. The film tends to make the great metropolis hard, unfeeling and transactional, all of which it can be. But the city is also a multicultural bundle of good humour, little of which Kabir Khan’s film shows. What we see is the ‘ugly American’ post 9/11, when anyone young, male and looking vaguely South Asian is a candidate for interrogation and, sometimes, detention.

What is different about Khan’s direction is his handling of actors, not just Indian but also American, from FBI agents to shopkeepers to people on the streets. He refuses to stereotype them as firangs and is able to give you a look and feel of authenticity, so necessary for a thriller about how the Bush Doctrine in homeland security—detention without trial—was counterproductive and may have even ended up creating more terrorists.

Three good looking South Asians—Sam (John), Maya (Katrina) and Omar (Neil Nitin)—meet just before 9/11 on a college campus and then go their ways. In the interim, the Twin Tower disaster has triggered a sea change in social and cultural attitudes. When they meet again, Omar is held by the FBI and can get out only if he helps infiltrate a ‘sleeper cell’ led by Sam.

Not the most romantic of infiltrations, you would agree, particularly since Sam is now married to Maya, the woman Omar was secretly in love with. But that is as far as Hindi film coincidences go. The film is tautly structured, has little room for sentimentality and has a nice mix of action and talk. Irrfan Khan as the laconic FBI officer on special duty for Indian suspects provides bits of humour when he refers to his Italian wife and the volume of cheese he has to consume in her pasta.

A reservation about the film: the Irrfan Khan character becomes the spokesperson for the ‘message’ in the film, aimed pointedly at Muslim attitudes to the US. He says it is time to change old hostile views and see the positives in the American way of life, which far outweigh the odd mistake by State and individual. The ‘Obama Doctrine’ in a nutshell?