In spite of its beauty, this is a morbid film which depresses, to a much greater degree than it enlightens 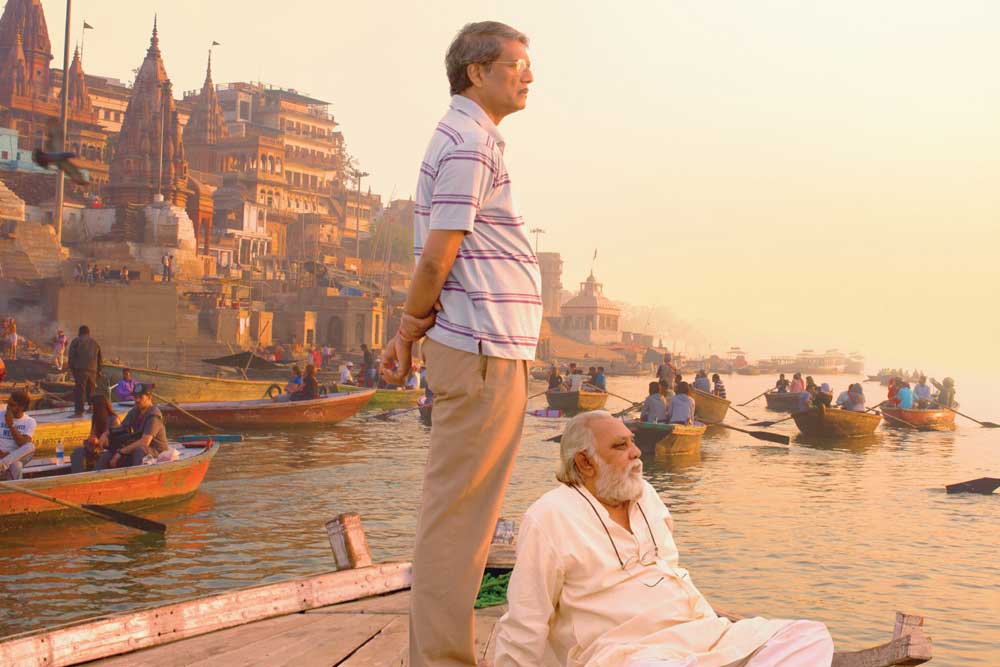 Mukti Bhawan is an actual transit motel in Varanasi where you can spend the vague interim period between this life and the next. If you think you are going to die, you can check in for two weeks, and if you don’t give up the ghost within that stipulated period, you have to check out, and maybe try your luck some other time.

This movie is about an elderly man who has a dream one night which convinces him that he is beckoned to the after-life and must prepare for his imminent demise. Because it is a holy city, and because the concept of death being an escape from life’s torment is so ingrained amongst the believers, even his family – consisting of a middle aged son, daughter-in-law and granddaughter – dare not suggest that Daya (Lalit Behl) has no disease and looks in fairly good health for his 77 years. The plan to go to Varanasi and die, based on the reading of his dream’s narrative, sounds patently absurd to them at first. But he is the patriarch, and so everyone falls in line with his views.

It appears that the film maker, too, seems to unquestioningly accept all received notions of the predetermination of human longevity, and the individual’s capacity to receive a premonition about his end. He seems absorbed and enchanted by the concept of death being a knowable entity, and Varanasi being a city that can interpret the purpose of this endless cycle of existence and non-existence. Except for vague murmurings of protest by his son, Rajiv (Adil Hussain), Daya’s certainty about achieving deliverance, in the given period of his prophecy, is not viewed with the slightest bit of skepticism by the writer and director.

The result is that the movie retains an air of tranquillity, while being shorne of any dramatic conflict. The only moments that disturb the serenity of life and death in the film, are when there are disagreements between father and son. These consist of several heart to heart conversations about misgivings of the past. Rajiv feels that his father has never had any time for his mind and his interests, and is dismissive about the poetry he writes. The father, in turn, is amazed by the hurt felt by his son, and there is a poignant moment of reconciliation between the two. Adil Hussain gives us a marvelously restrained performance as the repressed and unhappy son.

Mukti Bhawan is a beautifully shot film, with an austere visual and sound design, in keeping with its reverent perspective on the rituals of life in Varanasi. From dawn to dusk, we see a city with a host of elderly, temporary residents paying obeisance to nature and to faith; their daily routine punctuated by the sound of the chant at the endless funeral processions – Ram Naam Satya Hai.

The saddest character in the film is Vimla (Navnindra Behl), a perfectly healthy woman, who once came to Varanasi with her husband to die, but ended up surviving him by eighteen long years. The film, however, never engages with the absurdity of her situation and, in fact, endorses the notion that what her trapped soul now needs most is liberation – mukti. So in spite of its beauty, this is a morbid film which depresses, to a much greater degree than it enlightens.