Miss Lovely began as a documentary project but director Ashim Ahluwalia had to drop the idea when his contacts refused to speak on camera. The story behind a film set in India’s C-grade smut industry 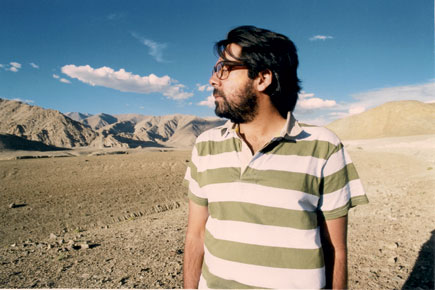 Miss Lovely began as a documentary project but director Ashim Ahluwalia had to drop the idea when his contacts refused to speak on camera.

About 14 years ago, Ashim Ahluwalia, then an aspiring filmmaker, found himself getting drunk one evening with a man he had come to know as Shirish. This man worked as a pimp and doubled up a “ladies supplier” to India’s C-grade film industry. Ahluwalia was trailing Shirish so he could convince him to be part of his documentary on the industry. In Shirish’s home, in a seedy locality in Mumbai’s Adarsh Nagar, the two were joined by Shirish’s women. They drank, ate dinner and watched an episode of Kaun Banega Crorepati. Ahluwalia couldn’t help but find that moment oddly beautiful.

The documentary never happened. He went to the sets of Maut Ka Chehra, chased its makers, pursued other leads, spoke to other filmmakers and distributors, developed close friendships, but when he tried to make the documentary, none agreed to speak on camera. What these filmmakers and actors were doing was, after all, illegal. Days turned to months, and soon enough a year and a half had passed. All he had with him were notes, interviews on his dictaphone, some footage he had shot while hanging around with the actors and filmmakers, but nobody was willing to be part of his project.

He put this disappointment behind him, and went on to make other films and commercials. But many years later, when he wanted to make his first feature film, these experiences proved valuable. His just-released film Miss Lovely was to be on the C-grade film industry.

The idea of a film on the C-grade film industry first occurred to Ahluwalia in the late 1990s. Back in Mumbai after his filmmaking studies in the US, he had chanced upon the poster of a C-grade film. He had seen some of these smutty flicks as an adolescent; he was surprised to find that they were still around.

After following a few leads, Ahluwalia was able to make his acquaintance with the makers of the sex-horror film, Maut Ka Chehra. The producer turned out to be a dodgy builder who appointed a friend as his director. Shirish came on board as the ‘ladies supplier’, pocketing a large amount of the film’s budget, and bringing with him a cameraman who could pull off, in Ahluwalia’s words, “nude shots quickly without his hands shaking”. The film told the story of a serial rapist and contained gratuitous scenes of nudity and sex. It was shot in friends’ flats, abandoned warehouses, cheap ‘one-hour’ love motels in Madh Island and Andheri, and wrapped up in a matter of days. They were initially suspicious of Ahluwalia and called him an ‘English-speaking type’. But they allowed him on the sets, invited him to their after-parties, and let him attend distributor meetings. Soon, they became good friends.

Ahluwalia used this network to explore this world further. He met the famed C-grade filmmakers Kanti Shah (who directed films like Gunda) and Joginder (who made and acted in a number of films like Pyasa Shaitan). He learnt that Joginder’s real name is Joginder Shelly. On their first meeting, Joginder showed him a photograph of a naked woman serving coconut water to the director and producer on a film set. “He told me, ‘My films are all about this. You understand?’,” Ahluwalia says. “Later, I discovered that [Joginder] had also enacted sex scenes himself, making no attempt to disguise his appearance. The idea of these guerilla filmmakers existing on the margins of mainstream society, with little experience in filmmaking, cranking out films in less than a week with little budgets… I found this idea terribly exciting.”

Ahluwalia learnt that many of these films were financed with money from smaller gangs, several of the actresses worked as prostitutes, and that the film came in two lots—the first lot, the main plot of the film, would be passed through the Censor Board. The second lot, colloquially referred to as ‘bits’ in Mumbai, featuring the nudity and sex scenes, would be added later.

He has met many of the women who acted in these films, most of whom worked under assumed names. “They were mostly from outside Mumbai, who came to the city to become film actresses,” he says. They told him their stories. He remembers, in particular, an actress who called herself Karishma who had moved to the city from Kolkata. She disappeared one day and her headless corpse was discovered in a mangrove swamp a few days later. “It was disturbing. Suddenly, nobody wanted to talk about her. It was such a world. You ticked off the wrong guy, and you could land up buried in a mangrove swamp without your head,” he says.

Ahluwalia discovered that besides sex-horror films, the C-grade industry also spawned several sub-genres—such as the female daku (bandit) picture, the tribal exploitation film, the domestic lesbian tragedy and the impotent husband melodrama. “The most intriguing, however, was the medical film. In movies such as IV Sasi’s Teen Love & Sex and anonymous fare such as Lady Doctor, Gupt Gyan and Birth of a Baby, audiences were shown graphic footage of childbirth and venereal diseases. The basic idea of these films cloaked in pseudo-science was to allow the mostly rural audience a guilt-free viewing of female genitalia. The camera would often participate like a doctor, probing the female body [as part of a supposed] medical check-up. Ghastly scenes would sometimes offer up diseased private parts for examination. Animated eggs would float across the screen, fused with a barrage of creepy photographs and narration pinched from forgotten Italian sex education films,” he says.

As time went by and no one agreed to do the documentary, Ahluwalia felt he had overstayed his welcome. “I would be called to places, and no one would be there. There would be anonymous calls, questioning my reasons for hanging around the industry. Sometimes, late in the night, I’d get strange calls from women asking me to meet them. My film was not working out. I was getting a little paranoid, and I had to get out,” he says. Ahluwalia changed his phone number and stayed away from the industry.

In the period following this, Ahluwalia made a documentary called John & Jane, about people who worked in India’s booming call-centre industry. The film proved successful, and he won a National Award for it in 2005. He also formed a production company, Future East, to make films and commercials.

But the stories he experienced in the seedy underbelly of Mumbai continued to draw him. When he started working on Miss Lovely, he realised that the industry had collapsed. Globalisation, the easy availability of porn on VCD and the internet had flooded the market and destroyed most demand for these underground sex films. “They exist [now] only as oral history and hearsay,” he says. “All we know is that thousands of them were made each year, hundreds would play every month. Most are now lost. It is still a mystery how these filmmakers and actors functioned in such a conservative atmosphere.” As he started looking for people who had once been part of the industry, he realised that some had started working in Bhojpuri films, while others had entered the straight-to-internet porn industry. He hired many of these old hands for his film, like one make-up artist who once used to specialise in the make-up of ghosts and monsters. Ahluwalia also sourced old C-grade footage, much of it sexually explicit, to be used for the film. Nawazuddin Siddiqui, then an actor who had done a few bit roles in mainstream films and also starred in a few C-grade films, and Niharika Singh, a former Miss India, were screen-tested and awarded their first leading roles. The locations used by C-grade filmmakers had been long knocked down. So Ahluwalia made do with what he could find—using the space of old South Mumbai theatres that screened these films like Naaz Cinema on Grant Road, shooting at cheap one-hour hotels from Colaba to Yari Road. About the look of the film, he says, “We spent a lot of time dipping costumes into tea and deteriorating them. I wouldn’t let anybody take a shower or wash off make-up. I wanted things to look lived in.”

The film tells the story of two brothers, an ambitious smut film producer and his younger brother who falls in love with a mysterious woman. The deteriorating relationship between the two brothers is set against the backdrop of the C-grade industry. The film itself is a difficult one to classify. It is strikingly original in narrative and pacing, with a 1980s Mumbai that is very different from anything yet seen on celluloid. The atmosphere it creates, the ambient sounds and lighting is hypnotic. Yet, the film appears fragmented and episodic. It feels neither like a mainstream film nor a traditional Indian ‘art house ‘film.

In an email, Ahluwalia explains, ‘Miss Lovely offers a sort of ‘revisionist’ history. Not because it documents the history of exploitation films, for such a record has never existed, but because it can be seen as an attempt to address an inequality in our conception of Indian film history. After all, our filmic past is not just contained in the worlds of the mainstream and parallel/art cinema movements, but in this shadow cinema as well.’

Stating that he wanted to create a quintessential Hindi movie about a kind of Mumbai he knew— the villains by the pool, the cabaret—Ahluwalia says, ‘There were two things I was keen to stay away from— parody and nostalgia. It’s easy to fall into the 1980s thing and think it was great. I didn’t want to commodify or romanticise the period… I am not making fun of the scene or the people. I am not trying to say that it was a cool, funky time. I wanted to give it a poetry that was real. I told Mohanan (the director of photography or DoP) that I wanted the film to be drenched in humidity. Everything had to feel like it was drenched in moss.’

The film has been travelling the festival circuit for a few years now, and was selected for competition at the Cannes Film Festival’s Un Regard Section two years ago. When it was sent to the Indian Censor Board for approval, the Board demanded 157 cuts. The director argued against the Board’s decision, and after four reviews, was able to get the cuts down to just four scenes. Most of the nudity now appears blurred, while scenes with cuss words have been edited out.