Devoid of authenticity and political depth, this biopic disappoints on many levels 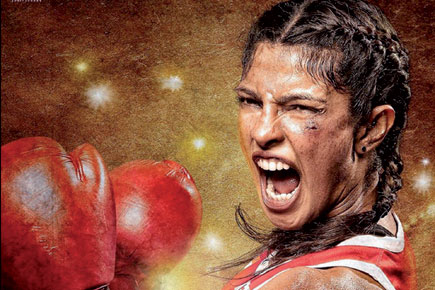 Devoid of authenticity and political depth, this biopic disappoints on many levels

One of the finest Hindi films on women in sport was Chak De! India. Among the hockey players Kabir Khan (Shah Rukh Khan) coaches in that film is a girl from Mizoram (Kimi Laldawla) and a girl from Manipur (Masochon Zimik). They look particularly convincing in a crucial scene when teased about their looks by leering men at a restaurant. That’s when the whole team gets together to give the harassers a thrashing.

In similar vein, there is a dramatic scene in Mary Kom about boxing and regional politics. After a match at a national competition, Mary (Priyanka Chopra) screams at Federation officials about ethnic prejudice against herself, a Manipuri boxer, and is promptly banned for her outburst. But the set-up is not believable because Priyanka looks distinctly more North Indian than the girl she claims unfairly beat her.

True, Ms Chopra does a terrific job of playing a woman boxer and a mother— and the never-ending conflict that arises while doing these two herculean tasks simultaneously. But it’s just not enough. Mary Kom, the boxer, has an identity in time, outside of international sports and motherhood, and had she been a character from the early 19 century (before photography), this casting might have worked. But as the contemporary celebrity she is, the ontology of the photographic image denies our imagination the remoulding of her facial features into those of Ms Chopra.

Director Omung Kumar has made a well-shot film on a violent contact sport, but he runs out of interesting biographical material very quickly. Connecting Mary Kom to the complex ethnic mix of hill and plains people in Manipur—and the volatile politics that it results in—is clearly beyond his ken.

Finally, patriotism fills in the blanks. Wrapping itself in the flag, the film forces the audience to stand up while the national anthem is played, start to finish. Apparently, that’s the only substance left over in this biopic.