The rise of Asia at the 32nd Tokyo International Film Festival 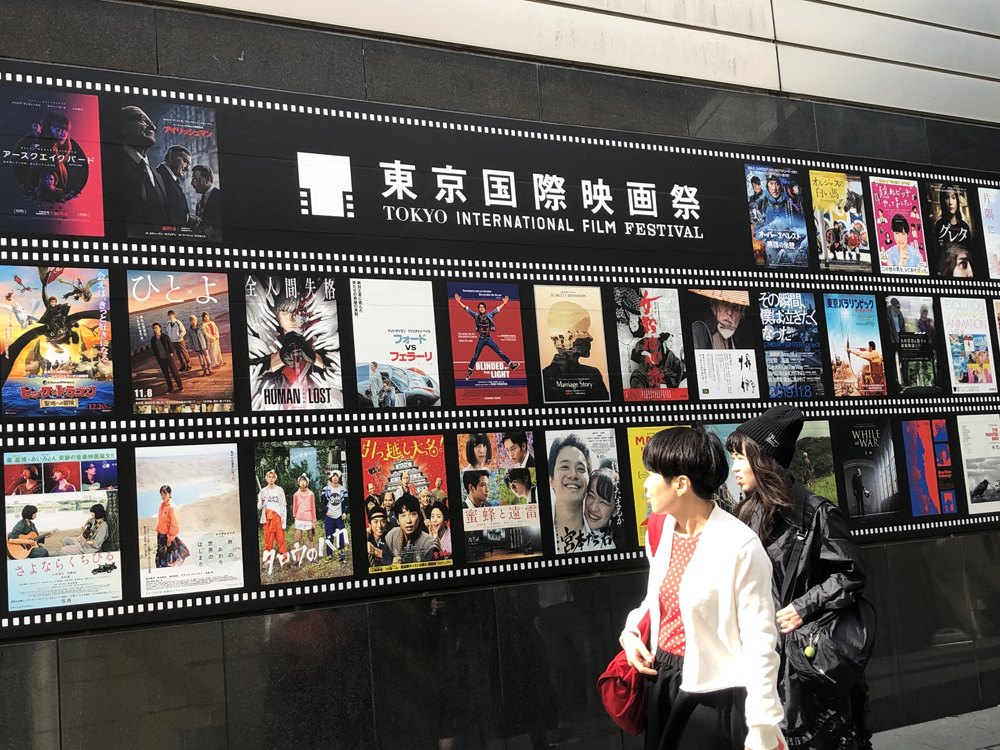 The 32nd edition of the Tokyo International Film Festival, the oldest in Japan, was held from October 28-November 5, 2019


In the beginning of celebrated Japanese director Nobuhiko Obayashi’s new film, Labyrinth of Cinema, three young men watching the last screening in a cinema that is going to be closed for good suddenly jump into the screen. Thus begins their journey, and the film’s, through time as we are transported into a world of wars. It is no coincidence that the movie hall in Labyrinth of Cinema is located in the Hiroshima prefecture.

A known anti-war activist, Obayashi was born in the Hiroshima prefecture seven years before the atom bomb was dropped on the city in 1945. Shot in his hometown Onomichi, about 70km from Hiroshima city, Labyrinth of Cinema is a fantasy film with a compelling message—Say No to War. The anti-war theme echoed through the official selection of the 32nd Tokyo International Film Festival (28 Oct 2019 – 5 Nov 2019), where the world premiere of an ailing Obayashi’s new film was a highlight.

“I have the responsibility to keep on making films,” Obayashi, 81, told a packed hall at the Tokyo festival. “Unless we take some action, the world is not going to change and not going to become a better place,” added the wheelchair-bound director, who is battling cancer. Obayashi was not the only one to use the spotlight of the Tokyo film festival to make a statement. At the opening ceremony, festival director Takeo Hisamatsu delivered a stern message: “I want a kind of world where there is no war at all.”

While Japan will observe the 75th anniversary of the dropping of atom bombs on Hiroshima and Nagasaki next year, the country has just entered a new era with the crowning of the emperor Naruhito, whose enthronement ceremony was attended by world leaders a few days before the Tokyo festival began. The new Reiwa era is bringing in an optimism that the third-largest economy in the world after the United States and China so badly needs in a world of conflicts and meltdown. That optimism carried the country into the quarterfinals of the Rugby World Cup hosted by Japan during October-November. And Japan is not logging out of global attention anytime soon. Next summer, Tokyo will host the 2020 Olympics and Paralympic Games, keeping the world’s attention on the island-nation.

Labyrinth of Cinema—which re-visits the atomic bombing of Hiroshima by three young men who travel through time—was joined at the Tokyo festival by a new adaptation of the much-loved anti-war Manga comic In This Corner (And Other Corners) of the World, and Boy Soldiers: The Secret War in Okinawa, about the dark history behind the infamous Battle of Okinawa in 1945 that claimed 240,000 lives. Filipino director Brillante Ma Mendoza, who won the Cannes Best Director award in 2009 for his dark police corruption drama Kinatay, forays into the humane side of the civil war between president Rodrigo Duterte’s forces and Islamists in Southern Philippines in his new film, Mindanao, while compatriot Lav Diaz weighs in on climate apocalypse with a 283-minute sci-fi thriller set in 2034 Manila, in The Halt, both official selections at the festival.

There may not be an Indian connection to the Tokyo festival this year, barring the London-based British director Gurinder Chadha’s new movie, Blinded by the Light, but the subject of a new Japanese documentary is an avid follower of Mahatma Gandhi. Reiwa Uprising, the new film by acclaimed Japanese documentary director Kazuo Hara, is shot entirely on the election campaign of Asumi Yasutomi, a transgender woman who ran for the Upper House of parliament in the elections in July this year.


Prof. Yasutomi, a teacher at the University of Tokyo’s Institute for Advanced Studies of Asia who came out as a transgender woman four years ago, thinks Gandhi’s satyagraha can help contemporary society that is “colonising the soul”. “I want to decolonise the human spirit through satyagraha, which is about holding the truth in one’s heart,” the economics professor said. “The truth, for me, is that I am a female, not a man. Therefore, I hold onto my own truth, it is satyagraha for me,” she explains. “We must learn from Gandhi because we Japanese are very good at weaving the truth. There is a basic morality for the Japanese.”

Reiwa Uprising, which had its world premiere at the Tokyo festival, is viewed as an important documentary that discusses a new brand of politics. Prof. Yasutomi’s party, called Reiwa Shinsengumi—combining the new Japanese Reiwa era with the name of a 19th century Japanese police force—was founded by a former actor, Taro Yamamoto, only three months before the elections to the Upper House. The party is fighting to raise the minimum wages, and for LGBT rights, animal rights and banning nuclear plants. Reiwa, which chose mostly activists for its candidates, won two seats in the Upper House and both its new members of parliament are people with disabilities.

The 2019 edition of the Tokyo festival will be remembered for stirring a nostalgia for the finest works in Japanese film and literature. A digitally restored Rashomon returned to the screens and a Japanese gift to the annals of film history—the world’s longest running movie series starring the same actor—improved its own record. Akira Kurosawa’s 1950 classic, which was restored in 2008, was screened this time to pay tributes to its actor, Machiko Kyo, who passed away in May this year after a career spanning seven decades.

Japan also welcomed back Tora-san, Wish You Were Here, the 50th installment in the Tora-san series, as the opening film of the Tokyo festival. Yoji Yamada, an 87-year-old Japanese veteran filmmaker, brought back his It’s Tough Being a Man series about the friendly drifter, Tora-san, who is always unlucky in love. Yamada, who wants to continue making films like Clint Eastwood (89), uses computer-generated imagery to resurrect his lead actor Kiyoshi Atsumi, who died in 1996, to the screen. “To be honest, I am little tired,” quipped Yamada at the opening ceremony where Tora-san fans cheered the new film, in which the wanderer’s writer-nephew fondly remembers his uncle for making him a good man.

The live-action Tezuka’s Barbara, premiered at the Tokyo festival in the prestigious competition section for the Tokyo Grand Prix—the festival’s top honour—is a fantasy tale of love and occult. Yosuke Mikura is an influential writer who is driven to the brink by his crippling sexual perversions. Everything changes when he brings home Barbara, a destitute with a taste for literature. The Manga film borrows heavily from Friedrich Nietzsche to Junichiro Tanizaki to make sense of madness and love. The film begins with a Nietzsche quote: “There is always some madness in love. But there is some reason in madness.” Tanizaki offers the lines, “Love is the greatest form of art, created from blood and bones.”

Tezuka’s Barbara and A Beloved Wife by Shin Adachi were the only two Japanese films in the competition programme, whose jury was headed by Chinese actor Zhang Ziyi, who played lead roles in Wong Kar Wai’s The Grandmaster, Ang Lee’s Crouching Tiger, Hidden Dragon and Rob Marshall’s Memoirs of a Geisha. Besides Tezuka’s Barbara and A Beloved Wife, there were four more Asian films in the competition section, from such diverse filmmaking nations as Iran, Turkey, China and the Philippines.

Mananita, Filipino director Paul Soriano’s new film about an out-of-job military shooter, is written by Lav Diaz while the Iranian Saeed Roustaee’s sophomore feature, Just 6.5, stars A Separation actor Payman Maadi in an intense drug violence drama set in Tehran. “When I joined the force, there were a million drug addicts. Now, after years of arresting, detaining and prosecuting people, there are 6.5 million,” says Maadi’s detective in the film. Food for a Funeral by Turkish director Reis Celik tells the story of a boy’s dream to become an ashiq, a traditional singer. Chinese filmmaker Wang Rui’s Chaogtu with Sarula deals with the dilemma of an ordinary Mongolian couple with different priorities.

Chinese director Yonfan, known for launching the careers of stars like Maggie Cheung and Daniel Wu, travels back to 1967 Hong Kong, which is witnessing anti-colonial protests in his new film, No.7 Cherry Lane. Winner of the Best Screenplay Award in Venice this year, the animated film tells the tale of a Hong Kong university student’s relationship with a mother and daughter while the city is reeling from riots. Mattie Do, the only female filmmaker in Laos, came to Tokyo with The Long Walk, a Venice Days and Toronto entry this year. “I work with non-actors, who I find in the street or in the market,” says Do, who establishes her status as one of the finest Asian filmmakers today with The Long Walk, a surreal drama about rural poverty, diseases and migration.