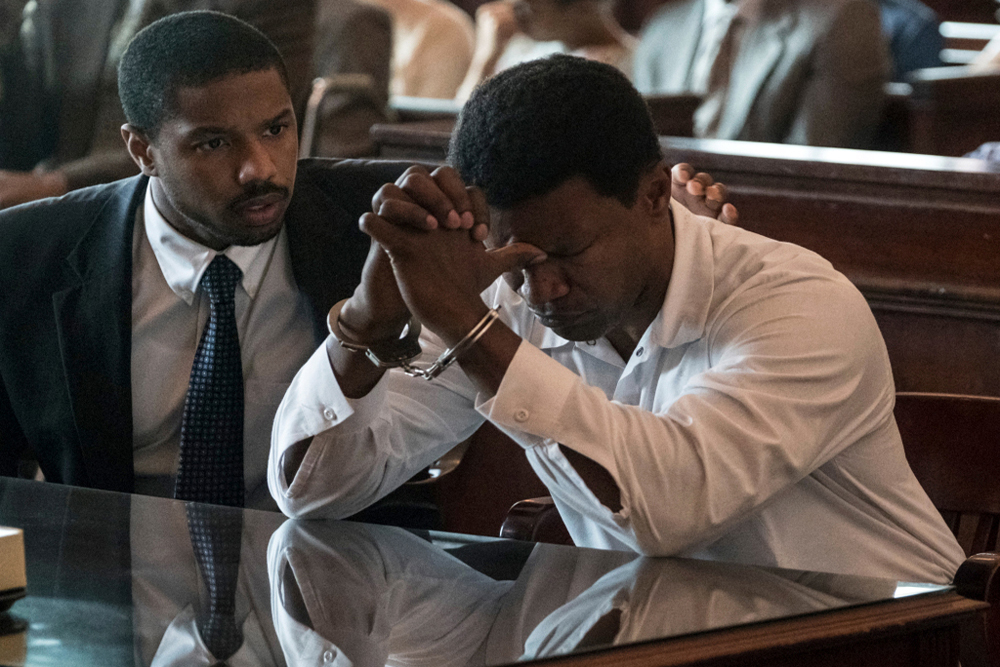 Based on the memoir of  Brian Stevenson, a defence attorney for poor people and minorities in the Southern States, this film gives us to understand a couple of things. One is that the African American holocaust is divided into three stages, the last of which is still in operation. First it was slavery, then lynchings, and then incarceration. A large number of the prison sentences, disproportionately given to black men, are from bad trials, and worse sentencing, leading up to decades of jail time, and, sometimes, placement on death row.
The second thing we grasp instantly, and which is conveyed through the emotional quotient of the cinema in ‘Just Mercy’, is the appalling nature of Capital Punishment. In a horrific scene in the movie we see a man executed by electric chair. This is in the 1980s, not so long ago for it to slip into the bad and distant past. We see details, like the humiliation of a grown man who is brought trembling to sit in what looks like an ancient dentist’s chair. Before that, he has all the hair on his head and face shaved, including his eyebrows. He is displayed through a glass window, behind whom sit the learned people in judgement. When the lever is pulled, there is a loud bang, the smell of burning flesh fills the air, the doctor rises to check the body, and then the paperwork begins.
The way the mise-en-scene and the camera position divides the executed man from the witnesses to his death, suggests a State seeking revenge, in moral opposition to one of the ‘Ten Commandments’ – ’Thou Shalt Not Kill’. Not since ‘A Short Film About Killing’, a powerful episode in Polish Director Krzysztof Kieslowski’s ‘Decalogue’, an adaptation of lessons from the Ten Commandments, has there been such a strong censure of Capital Punishment.
‘Just Mercy’ tells of Walter McMillian (Jamie Foxx) who is in despair after being wrongly convicted, perhaps set up by the State, for the murder of a young white woman in Alabama. Harvard educated lawyer, Brian Stevenson (Michael B. Jordan), arrives to take up his case. The first half of the movie shows us extraordinary levels of racism, in a casual, matter of fact manner, that succeeds in almost making it appear normal.
What hits you is the constant reference, by the establishment in law enforcement and justice, that protection of the ‘community’ is paramount. They consciously and openly rig evidence against the defence, for the sake of this ‘community’. Such is the blindness of their bigotry, that it goes against natural logic and the instinct of self preservation. Though it is clear that the real murderer of the young woman is still at large and roaming free, the State shows no interest whatsoever in investigating the case any further. ‘Desecration’ of white womanhood by black manhood is the important issue that binds them in united hatred.
A well acted movie, ‘Just Mercy’ is paced awkwardly in the first one hour, and drags a little. But once the passion and compassion of the lead character is unleashed, the horror that one people can inflict on another comes through painfully. As a matter of fact, the subject of the film is a little too close to home for comfort.
This is a contemporary and moving document of our times.