For all the gay jokes and homo-erotic scenes, it’s the film itself that is a major drag. 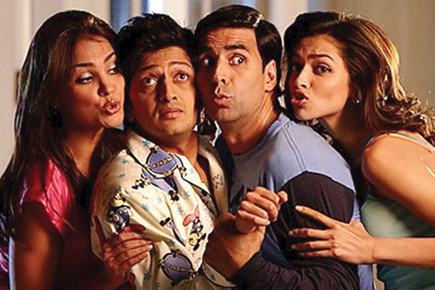 For all the gay jokes and homo-erotic scenes, it’s the film itself that is a major drag.


There’s a book waiting to be written about the gay subtext of contemporary Hindi cinema. In Housefull, as in Dostana, there is a pattern; a movie plot with a series of jokes on confused identities, some of them involving sexual orientation.

Akshay Kumar plays a loser, a guy who has perennial bad luck with women. Tired of his serial dumping by pretty girls, he turns up in the London flat of his happily married buddy (Deshmukh) and gets into his bed. The wife, naturally, freaks out. The jokes start from here and continue right up to the arrival of a tough anti-terrorist operative (Arjun Rampal).

Confused identities are one thing, but when the director places Rampal in a bathtub scene, with the two men trying to pinch his cell phone placed on the rim of the tub, and when the phone slips into the bathwater, this is not mistaken identity, it is homo-erotica.

Fortunately for the neglected heterosexual souls in the audience, there is Jiah Khan in two memorable scenes—a song sequence in a hotel room that would put a Las Vegas pole dancer to shame, and a dramatic emergence from the sea in a taut bikini that barely contains her. Add to this, the freaked out wife (Lara Dutta) dressed as a scrumptious cocktail waitress, and Akshay’s new girlfriend (Deepika Padukone) in stylish shorts, and you see the hedging of the movie’s sexual orientation bets.

Though not quite in drag, the film itself is a drag. The script is written with individual scenes in mind, not the creation of a character or the stringing together of a narrative. So one moment there is a tiger on a sofa that roars. Exit roaring tiger, enter ‘slapping’ monkey. Later, enter Santa Banta Singh, exit the British Royal family.

Despite its poor cinematic quality, Housefull seems to be placed on an unwavering trajectory towards the heart of the lowest common denominator of the Hindi film audience. It is a pitch that is so canny and so reductive.