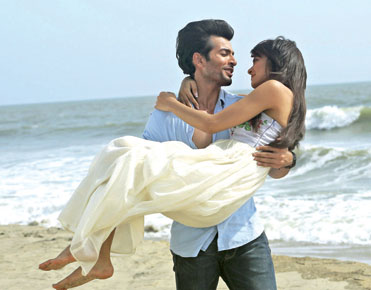 The ‘Hate Story’ idea, as it seems to be evolving, is conceptually quite interesting. The films are about women who reach a point of no return. The Hollywood archetype of this character is the gangster’s moll from ‘film noir’— a woman who is cynical about love and sex, uses a gun very effectively, and who often ends up either dead or not bothered about her own mortality.

The sexually suggestive publicity of Hate Story 2 is just a hook. A couple of bikini and bedroom shots don’t really justify it. What is interesting is how the film develops the persona of a young girl forced to become the mistress of a gangster politician in Goa. The mechanism of his cruelty and the psychological effect it has on her behaviour is closely watched. Violence and forced sex is visually connected in the film. In one scene, Sonika (Surveen Chawla) watches the politician, Mandar Mhatre (Sushant Singh), beat a man to death with a hockey stick. The next cut is Mandar pounding away, with equal force, on top of Sonika in the bedroom. It is a surprising metaphor—with no erotic content at all.

Her sadistic keeper soon turns Sonika into a nervous wreck. But when her young boyfriend, from the photography classes she takes, is viciously attacked, she is transformed into a terrifying gun-toting woman. The Goa Police, of course, are on the side of their politician mentor and paymaster, but a lone honest investigating officer (Siddharth Kher) comes to Sonika’s aid.

Hate Story 2 could have been a much better film. There is none of the ambiguity and darkness that such a subject inspires. Instead, we see an abruptness to the narrative and hyperbolic performances. Surveen Chawla has her occasional ‘bat out of hell’ moments, but Sushant Singh gives you a completely stereotyped ‘baddie’ in Mandar Mhatre.

Good in concept but average in execution, this film disappoints.