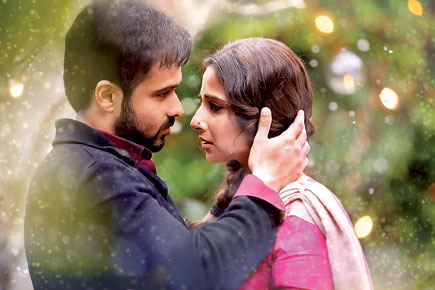 This film is written by Mahesh Bhatt, and though he usually uses material from his own romantic life to weave his stories, Hamari Adhuri Kahani goes back a generation to the story of his parents. This construct creates a conundrum. The film is set in modern times, but has a rather quaint, old-fashioned value system that addresses the idea of a woman’s relationship outside her marriage.

The story is of a flower arranger who is sent to see a very important client, the owner of a hundred hotels across the world, whom she impresses by her tastefully done floral setting. It could be the flowers, it could be Vasudha (Vidya Balan) herself, it could be the way their pheromones are secreted together, but the hotelier, Aarav (Emraan Hashmi), is clearly smitten. He offers her a job at his Dubai hotel, and, once she is there, woos her gently but persuasively.

But Vasudha is already married to an alleged Naxalite in Bastar whom she hasn’t met in five years. She also has a son. The cops are keeping an eye on her, just in case her husband, Hari (Rajkummar Rao), sneaks back home to meet her. Aarav doesn’t know all this, but when he does find out, his reaction is to hug Vasudha close and promise to use all his resources to prove her husband innocent, just as she believes he is.

The point is to express a love that transcends the temporal, to tell a tale of two souls who want to be united in this world and who will sacrifice everything even for a mystical connection. The metaphor used for this idea, right through the film, is the flower— generally white in colour, perhaps connoting that other world.

The problem with Hamari Adhuri Kahani is that the notion of eternity is far too long for the short attention span of contemporary film viewers. Had the idea of eternal love been abbreviated to, say, three weeks, this movie might have worked.