For Fame on the French Riviera 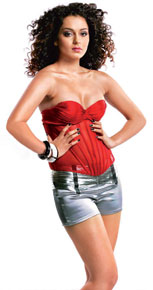 It appears that Anurag Kashyap is moving mountains to make sure that his ambitious passion-project Bombay Velvet gets the big festival bow that he believes it deserves. The movie, now scheduled to release in May, is perfectly timed to premiere at the Cannes Film Festival, and Kashyap was in Paris recently, reportedly meeting the festival’s big guns to show them the film and to push its case. Given that Cannes has played both parts of Gangs of Wasseypur, Ugly and Bombay Talkies (the portmanteau film in which Kashyap directed one episode) previously, it’s clear they have a soft spot for the director—like they do for some of the most promising international filmmakers whose films are regularly selected to play at the festival. But a source close to Kashyap reveals that he will not settle for selection in one of the sidebar sections this time. He’s reportedly pushing for the big one.

Bombay Velvet, whose international cut is currently being edited by Martin Scorsese’s longtime collaborator Thelma Schoonmaker, has a bunch of big names championing it. Kashyap, one hears, has asked the festival to play Velvet as its opening film. That slot, usually reserved for a prestigious film with major stars attached, is the festival’s most coveted honour and one that all big studios annually vie for. Never before has an Indian film opened Cannes, but Kashyap and Fox Searchlight (which will release the film in North America, reportedly) want to change that. Apparently they’ve promised to deliver a glittering red carpet full of Bollywood stars. But the buzz is that Cannes has already more-or-less locked Mad Max: Fury Road, George Miller’s remake of his own 1979 classic actioner Mad Max, as the opening film.

When Saif Ali Khan dropped out of Reema Kagti’s Mr Chaalu recently, it seemed like the audience had lost its chance to see the Chhote Nawab and Kangana Ranaut paired opposite each other in a movie. But now it seems that may not be the case. There’s a very strong likelihood that both actors will star together in Kahaani director Sujoy Ghosh’s next, an adaptation of the Japanese thriller novel The Devotion of Suspect X.

Saif has been attached to the film since it was announced, but Ghosh has reportedly been through a bunch of big names for the female lead (Aishwarya Rai Bachchan was reportedly interested at one point) before zeroing in on Kangana. The Queen star is believed to have loved the script and committed her dates from April onwards, when the film will likely go on the floors in Kolkata and nearby locations.

Kangana and Ghosh, who were originally meant to work together in the director’s yet-unproduced Durga Rani Singh, were said to have fallen out over her salary expectations on that movie. Looks like they’ve ironed out their differences since then.

Did you hear about the actor whose girlfriend is so insecure about their relationship, she doesn’t give him a moment’s peace when they’re not together? It can’t be easy watching women throw themselves at your partner, and it’s probably harder thinking of all the attention he’s getting when he’s travelling on work… No wonder this young lady (no stranger to the spotlight herself) keeps regular tabs on her boyfriend, calling him up repeatedly during the day when he’s out filming, or even when he’s just hanging out with the boys.

The actor, who has a major movie out soon, was recently out of Mumbai on a photo-shoot for a fashion magazine. Eyewitnesses on location reveal that his other half inundated him with phone calls throughout the day, despite repeated reassurances on his part that he was working. When he couldn’t answer the phone because he was giving a shot, she’d call his staff to confirm his whereabouts. Later that evening after pack-up, the team decided to unwind over drinks at a nearby watering hole, and her calls became more frequent. “She began insisting that he FaceTime with her then and there, so she could be reassured that he was out with the team and not picking up random women at a bar,” one source reveals. The actor was embarrassed when it became apparent to the rest of the team that his girlfriend was obsessed with knowing what he was up to at all times.

Those who’ve know him well, however, insist that his partner’s fears aren’t entirely unjustified. He may have a reputation for being shy and introverted, but he has a weakness for fooling around like every other young hot-blooded male actor, they say.