In Thiruvananthapuram to shoot his new film, Paul Cox talks about his ‘near death experience’ and what it has meant to his art 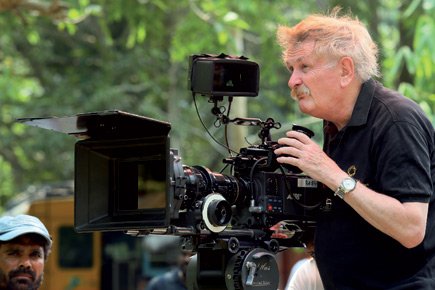 In Thiruvananthapuram to shoot his new film, Paul Cox talks about his ‘near death experience’ and what it has meant to his art

A Calcutta apartment in the 1970s. Paperbacks stacked on desks, newspapers strewn on the mosaic floor, and on the kerosene stove, tea for two. Ravens perched on the aluminium rails of either window silently steer their heads in unison, peering into the room, assessing the gora visitor Satyajit Ray had brought back home that evening.

Paul Cox met Ray when he first arrived in India to shoot a short film (Calcutta, 1971) about famine and Naxalism in Calcutta. “I vividly remember the spooky jet-black crows. Ray’s apartment reminded me of a Hitchcock movie. I trailed him to his movie sets, watched him at work and later [watched] the spotboy carefully cycling away, a tin trunk containing the negatives of the film fastened onto the back seat [of his cycle]. Those were the times when I met many remarkable geniuses like Satyajit Ray, Mrinal Sen, G Aravindan, John Abraham.”

Cox fondly remembers these men and sketches a verbal caricature for each: “Aravindan, with his Christ- like calmness, barely spoke. He sat up straight and stared at you with warmth like this holy ascetic. I was impressed by his silence. Back then he made films within a budget of $15!”

Over the years, Cox has visited India frequently, like a fond relative settled abroad who arrives with a box of Hershey’s every four years. This time, Cox is in Kerala to shoot the bulk of his film Force of Destiny, which tells the story of a sculptor (David Wenham) awaiting a transplant who falls in love with a woman (Shahana Goswami) during what could be the last days of his life.

We are sitting on two cane chairs in the courtyard of room No 602 of the Somatheeram Ayurvedic resort in Thiruvananthapuram, on the final day of the shoot.

When asked why he chose coconut palms, the beach and the small city of Thiruvananthapuram as the backdrop for his film, he points to a lamppost five yards away and says: “If I want to get there, I will [have to] get up and walk. It is not necessarily ambition, but more often compulsion.” In this case, the compulsion was Baby Mathew, the proprietor of this resort, who is co-producing Force of Destiny.

Cox is an award-winning Australian filmmaker, known for My First Wife, A Woman’s Tale and Innocence. In February 2009, throbbing pain and nausea overtook Cox. Two appointments later, he was diagnosed with cancer of the liver. Lying in bed, gulping down water and pills, he wrote a stream-of-consciousness novel called Tales from the Cancer Ward. Nine months later, on Christmas eve, a young man’s death saved his life. But for him, the world is now a place where he wasn’t meant to be.

“Nothing has ever been the same since. I don’t know why it is so emotionally impossible to comprehend my existence. I am here, yet I am not. The sky, the trees, the birds, even your face, it is as though I—”. Words halt midway, blocked by the lump in his throat.

He sips some water and begins to describe a scene from the cancer ward, which he has adapted for this film. “I was on my hospital bed, eavesdropping on a conversation between two nurses. I heard one say to another, ‘Mrs X wants somebody to take out her tubes and attachments because she doesn’t want to look sick in front of her eight-year-old daughter who is going to visit her.’ Later that day, I heard a child weeping and a strong mother reassuring her that she’d be alright and would return home soon.”

“A few nights later I heard them wheel her out of her bed, away from the ward, away from everything that exists.”

Childhood turns out to be an equally grim subject. Born in the Netherlands in 1940, in the midst of the Second World War, the first years of Cox’s life were full of death and destruction. He was about five, on his mother’s hip, his hands coiled around her neck, when they left their home to find that the street they lived on was gone. Bombarded. The rest of his childhood was spent walking through ruins. All he wanted was to flee from his hometown, and at the age of 23, he got onto a boat and left for Melbourne.

“I distinctly remember the calendar that hung behind my toilet door during the short span I was at Melbourne University,” says Cox. “It had a picture of Balinese women dancing with their golden tiered headdresses. Strangely enough, my wife, whom I met four years back in the cancer ward, is from Bali. I am 74, and for the first time I am in a proper relationship!”

Temple bells resonate close by. From a nearby junction, we can faintly hear the speech delivered by a communist frontrunner. “It is lunacy, the same boring faces blown up all over the place,” says Cox. “Look at that temple around the corner; they say it’s 500 years old with nuanced woodwork in the pillars and walls. And they have now plugged on flashing fluorescent lights on the windows [and] walls. Where is the minister of arts and why doesn’t he condemn it as tasteless? The only thing that remains from a civilisation or a society is its art; everything else crumbles. But still, look at the plight of art in your country.”

That isn’t the only thing Cox ridicules. The hordes of people on a film set suffocate him. “Unless you are shooting one of those high-end American films with bullets and shields, why do you need a hundred people on the set? When I rented out a camera, along with it came four guys. Why? I don’t work with strangers and I think it is unfair to the actors too.”

Every morning in the cancer ward, Cox woke up to the murmurs of nurses and the wails of occupants. His routines included painting, writing, crafting shell-curios and checking his email for a regular dose of correspondence from his long-time friend, the acclaimed film-critic Roger Ebert. Though miles apart, Ebert and Cox were partners in sickness. They had been diagnosed with cancer almost simultaneously. The former was an optimist, the latter a pessimist.

During the 2012 Ebertfest, Ebert, who had by then lost his voice to thyroid cancer, scribbled on the corner of a notepad: ‘Paul, why don’t you sit next to Seema?’ This is how Cox got introduced to Seema Biswas, the Bandit Queen of Indian Cinema, who plays a key role in Force of Destiny. Two of the surgeons who operated on Cox in real life are also in the film.

Suddenly, as if in a trance, Cox gets up mumbling “near death experience… twenty minutes” and walks into his room. He returns with a copy of his book Tales from a Cancer Ward. He opens to page 196 and hands it over to me. ‘I’m lying between white sheets, attached to several lifelines. People around me are trying to keep me alive, to save me. I know death is nigh, but I feel at ease and smile at the thought that so many have faced this before me.’

As we are about to part, the crew of his film is returning after a swim. I wonder out loud why the director is not out on the beach on a day like this.

“Then how come you are away from the city, in a beach resort?”

“I am not a city person either. Some people are always homesick and don’t know where home is.”

The sea retreats, the cane chairs are dragged back, and the 74-year-old filmmaker goes back into his room, to page 73 of The Lowland. It takes him back to Naxalism and Calcutta and scenes from a Satyajit Ray film.