Once the site of aspirational perfection, the great Indian middle-class family is becoming less judgmental and more inclusive 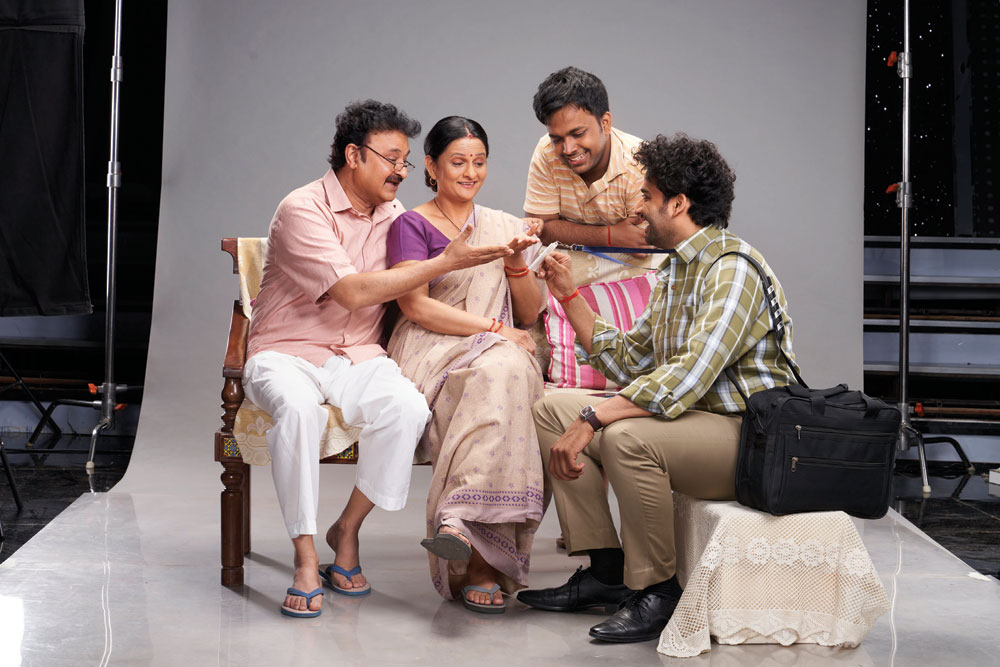 A scene from Gullak


The father whose salary gets spent by the tenth of every month; the son who has just started earning and whose pay the family is eyeing; the mother who adds water to the kheer to make it stretch to four portions; the youngest of the family who always gets pushed around. Season 3 of Gullak is back on Sony Liv, as is the charming Mishra family, with its everyday woes of arranging weddings for the extended family, dealing with office politics, and handling nosey neighbours. It’s a whiff of nostalgia, says Geetanjali Kulkarni, who plays the tart-but-wholesome Shan­ti Mishra, like watching old Doordar­shan soaps such as Yeh Jo Hai Zindagi and Wagle ki Duniya, but with contemporary references. “It’s a family from nowhere but also from everywhere,” adds Jameel Khan, who plays Santosh Mishra, her idealistic husband, a clerk at the local electricity department.

Gullak is beautifully written with scenes that will leave you smiling: the mispronounced English words, the elec­tricity going off at the electricity department office, the middle-class family’s me time being we time, and the typical Indian father, who spends his evenings watching Ravish Kumar on TV, eating chicken, drinking a peg or two, and then listening to Begum Akhtar (or as his wife thinks, Javed Akhtar) on the boom­box. And what crackling dialogue. “Pass­book dekhne se paise nahin bad jaate (The money in the savings account doesn’t rise by merely looking at the passbook),” or the father to the son, when he is uttering a Salman Khan dialogue, “Beta, if you look like Mohnish Bahl, don’t try to speak like Salman Khan.”

The family in Mumbai movies has travelled a long way from the Aditya Chopra-Karan Johar model of patriarch-led parivars, where the father, usually played by Amrish Puri or Amitabh Bachchan, brooks no opposition. The mother, loving and weeping, is usually a cipher, watching events unfold with a heavy heart. The Akhtar siblings, perhaps reflecting their own modern family, were the first to understand the change. Farhan Akhtar’s directorial debut Dil Chahta Hai (2001) had families but only incidentally, usually to pick up the tab of endless partying or to find sinecures for their aimless progeny. By the time his sister Zoya Akhtar directed Zindagi Na Milegi Dobara (2011), the family was seen only in the background at engagements and weddings, playing only a peripheral part in the lives of the protagonists.

And once Karan Johar stopped por­traying happy families, the end of the “Perfect Hindu Parivar” was certain. In Kal Ho Naa Ho (2003), which he wrote, the mother lived with the mother-in-law and her two children in New York. The father was barely mentioned. The movie also touched upon themes of inter-community marriage and homosexuality, albeit in a broad way. There was nothing perfect about the Kal Ho Naa Ho family with its squab­bling saas bahu, its unhappy but dutiful daughter, its disabled son, and its adopted daughter.


Now such families are everywhere. Gullak’s family is forever short of money and forever quarrelling. In Rishi Kapoor’s last film, Amazon Prime Video’s Sharmaji Namkeen, middle-aged women are perpetually engaged in kitty parties, but the film bothers to go behind their dumb charades and their karaoke sessions to understand how sti­fled they feel. One young woman’s hus­band doesn’t want to invest in her busi­ness because he feels she won’t be able to look after the children; another woman complains she was not allowed to work and now that she is spending her time doing nothing, her family objects to it. Sharmaji himself, retired early from his job at a home appliances company, runs the home efficiently, playing mother and father, after his wife dies. But he is expected to do as his children—now strapping young men—tell him to do. Quite the reversal from the father as an aloof know-it-all, with Sharmaji’s friend, played by Satish Kaushik, repeatedly bringing up Baghban, the 2003 family tearjerker where the parents are put out of the house by the children because they are seen as a burden.

“As a society we have become more accepting of differences and failures, but the love remains” says Geetanjali Kulkarni actor, Gullak

Not every aging parent can win a Booker Prize after writing his memoirs of abandonment, as Bachchan does. Nor can every couple be as loving as Bachchan and Hema Malini are. But the “Perfect Hindu Parivar” can show its cracks. In Badhaai Do, for instance, parental approval is not necessary for the gay man and lesbian woman who have entered into a marriage of conveni­ence, but when it comes, that too at a Hindu ceremony of naming the child, it leaves a sweet aftertaste. The partners of the queer couple are invited to the cere­mony, much to the discomfort of certain members of the family, but that is as it would be, says director Harshavardhan Kulkarni. The “Perfect Hindu Parivar” expands its mind and heart to encom­pass new ways of loving and being. “I know how difficult it is for gay people to come out and the acceptance, if it comes, is everything,” he says.

This conflict and oppression was at the heart of a movie such as Kapoor & Sons (2016), where a gay son was unable to be honest with his family. It’s no longer about the absent family as it was at the turn of the millennium. Now it is about the present family, and its many dysfunctionalities. As film scholar Parul Bhandari says, “Family dynamics are no longer about property fights and grand gestures of ‘bedakhal’ (disowning) or elopement but more focused on how other desires are asserted—sexuality, generation gap and career choices. We are beginning to see more diverse forms and dynamics of family in cinema and OTT now, where even if we don’t see a family that is definitely more inclusive or less patriarchal (a Modern Family version if you will), we are increasingly being shown the journey of getting there. This includes more negotiations, conversations, discussions, as well as ar­guments and challenging of authorities, which is refreshing and more realistic.”

Indeed, shows and movies are far less squeamish now (thankfully). In Netflix’s Bombay Begums, Pooja Bhatt ceremonially hands over a sanitary pad to her daughter as she has her first period, even as she herself enters menopause. In Rahul Nair’s Eternally Confused and Eager for Love (Netflix), the parents take an unhealthy interest in the love life of their only child. His father tells him how much to speak (“Be your own diaper,” he is told, “And catch your own shit”), his mother tries to fix him up with her friend’s daughter, while the silent manservant Umesh keeps the house ticking. Nair says he grew up on the idea that the giant, extended family was merely a cinematic convenience. The urban family was tiny, like in Eternally Confused and Eager for Love, where the son had the luxury of go­ing into his room to think about things. Nair himself was an only child till he was 14, when his sister was born.

Bollywood is also embracing the di­versity of middle-class family life—the urban, upper middle-class family in Eter­nally Confused and Eager for Love, and the struggling lower middle-class family of Gullak. Kulkarni, who has been married for 25 years to fellow actor Atul Kulkarni and has chosen to not have children, says the experience of working on Gullak gave her a healthy appreciation of the women in her life, her mother, her mother-in-law, her aunts. “When I was young,” she says, “I had this ego. I didn’t want to be a homemaker, but then I saw these strong women around me, and what self-esteem and confidence it takes to be a homemaker. They had their own voice. I started respecting them. Thanks to Shanti Mishra, I evolved as a person even though I am completely opposite to her.” For Khan, it reminds him of his own father, and of himself as a father. “We continue to see those values which are very middle-class even as it is getting fractured. It is important to balance the east and west,” he says.

In Rishi Kapoor’s last film, Sharmaji Namkeen, middle-aged women are perpetually engaged in kitty parties, but the film bothers to go behind their dumb charades and their karaoke sessions to understand how stifled they feel

Cinema allows us to see ourselves as we are, and as we could be. In Amazon Prime Video’s Jalsa, for in­stance, Vidya Balan as a single mother runs a household with help from her mother and her maid. It’s not easy. She has a demanding job as a journalist and she has a special-needs child. Her ex-husband, played by Manav Kaul, has his own family now, and only shares the occasional responsibility as a co-parent. The single mother’s life, especially as a successful professional, creates another kind of family. The widowed father in Sharmaji Namkeen creates a unique unit, loving and re­spectful of each other’s differences. The father is happy to remain in the fam­ily’s old West Delhi house, while the older son wants to move to Gurgaon to an upmarket community. In Badhaai Do, it is implicit that the seemingly heterosexual couple will expand to include the two lovers. What will that family unit look like? These are excit­ing possibilities for both society and art.

The filmmakers themselves have reimagined their families. Karan Johar, once the biggest proponent of the “Perfect Hindu Parivar”, has chosen to have children through surrogacy and co-parents them with his mother. Aamir Khan lives happily in the same building as his ex-wife, Kiran Rao, and speaks thoughtfully of the impact of his absence from the lives of his chil­dren when they were growing up. Even Aditya Chopra has married twice.

“As a society we have become more accepting of differences and failures, but the love remains,” says Kulkarni. Khan adds, “The family is getting to be even more sensitive to all kinds of relationships. There should be respect for all kinds of people. In Gullak, the sensitivity is identifiable like the concern for women. They are there for each other.” Where the family is the site of patriarchal values, as in Dil Dhadakne Do (2015) or in the Amazon Prime Video series Made in Heaven (2019), it is repeatedly called out by other charac­ters in the film or series. The tolerance for misogyny and abuse has declined.

From parent-centric, the family has become individual-oriented, enabling each member to live his or her best life. No longer is it impor­tant to blindly listen to what people say, or obey one’s parents’ diktat. In film after film, children are allowed to live their dreams, personally and professionally; marriages are dissolved when they stop giving couples joy (as in Netflix’s Decoupled) and parents are no longer intimidating figures of authority who cannot be questioned.

The family is becoming more flex­ible and forgiving. Now it’s time for India to catch up.