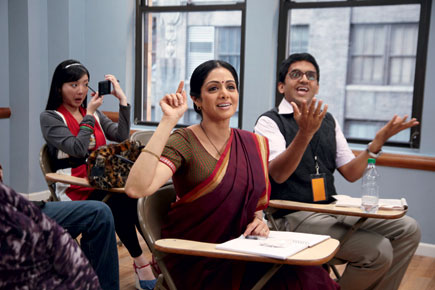 Hovering on the thin blue line between niche and mass appeal, English Vinglish opens a few doors for moviemakers who would want to tread the same path. The film is in Hindi, English and other Indo-European languages. It is multi-cultural, respectful to women who are homemakers, accepting of differences in sexual orientation, and doesn’t turn kids into sweetie pies or monsters. Shinde’s sensibility is clearly liberal.

But it is not radical. The ideas in the film, though perceptive, are safe and upper middle-class. Shashi Godbole, a housewife from Pune, travels to New York for the wedding of her niece. She speaks very little English and is hit by ‘culture shock’ in Manhattan when she tries to order at a ‘Deli’. The African American woman at the counter terrorises her. It is an embarrassing scene and a sharp observation. Shashi (Sridevi), elegant in her beautiful sari, looks like an immigrant just off the plane to a rude New Yorker, and the irascible denizens of this metropolis can make mincemeat of such targets.

Already upset in Pune by the patronising comments of her husband and daughter, Shashi secretly takes a crash course in the language. Why in secret? We never really know, but it is an opportunity to let her into the exhilaration of being independent and alone, probably for the first time in her life. At her English class, she discovers, or is discovered by, a cultured Frenchman (Mehdi Nebbou) who appreciates her for what she is, and though she will not fall in love, she is transformed.

What is admirable in English Vinglish is the stoic refusal to compromise realistic treatment with melodrama or cliché. The film is true to itself, in that you can recognise a voice—socially liberal, politically nationalist—that comes through consistently. So even if some of the comments on US immigration are over the top, it is honestly felt.

Plus, it is so nice to have Sridevi back on screen. Doesn’t the lady ever age?