The execution of the film, especially in the latter half, lacks logic, aesthetics, and even basic cinema sense 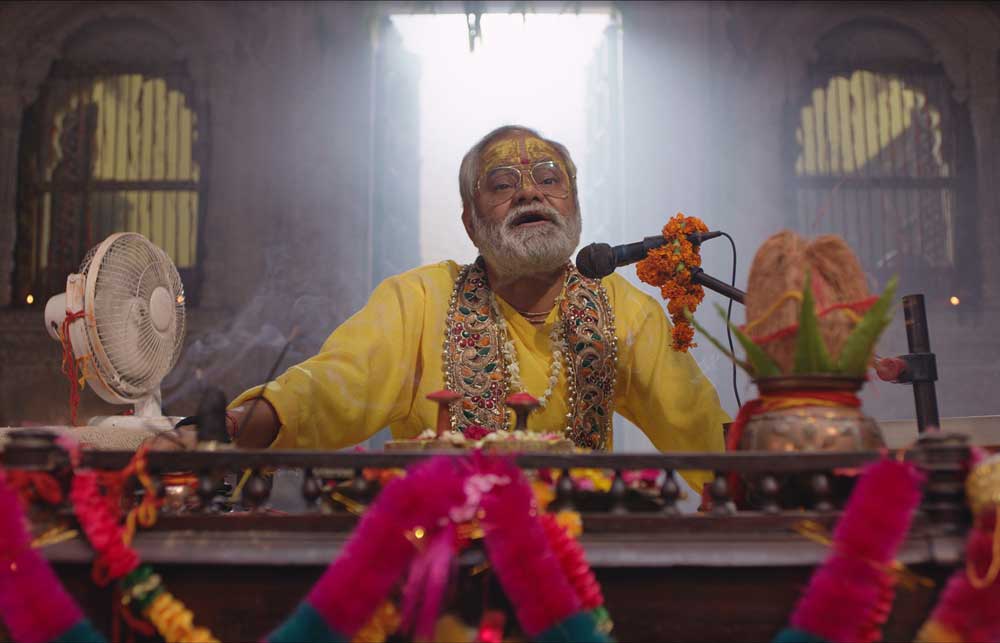 Sanjay Mishra is a wonderful actor, but he has handed us a lemon here. The movie is fine till the halfway point. Then it inexplicably disintegrates from a work that takes an empathetic look at the exorbitant expenses of a marriage and the havoc it causes in the economic lives of a family, to a free-for-all wrestling match between brides and grooms and their families.

Girdhari Lal Sharma (Mishra) is a ‘Pujari’ in Mathura who lives in genteel poverty. He makes little money from his temple services and has to depend on the earnings of his school teacher daughter, Radha (Kajal Jain). She pays all his bills, which sends the ‘Panditji’ onto a serious guilt trip. He knows that he will never be able to afford an appropriate marriage celebration for her. He dearly loves the girl and will do anything for her. There is a boy Radha likes, and he wants to see his daughter happily married to him.

A brain wave strikes his paranoid mind, and this leads him to a quixotic solution. He decides to auction his son, Banwari (Chandrachoor Rai), in the marriage market, to pay for his daughter’s marriage. The boy has written the papers for the Central Services Exams, but the results haven’t come out yet. No matter. Like an investment banker, ‘Panditji’ goes to a matrimonial agent, introduces his son as a future ‘Collector’, IAS, and then waits for the bidding to start. Some of the marriage proposals are quite hilarious, but others are racist and sexist. There is an NRI from East Africa who turns up with a Kenyan daughter, and another woman who introduces her bikini clad girl, paddling in the pool, as a massage parlour worker. Throughout this cattle trade, Sanjay Mishra’s nonplussed expression, as the eligible brides flit by, gets a lot of laughs.

Finally, the enterprising ‘Pujari’ settles on a nice Bengali girl from Kolkata who has tagged along to Mathura with her mother. The Mom and the Priest become drinking buddies, and this seems to settle the matter once and for all. It is at this critical juncture that the script of the movie suddenly goes over the deep end. The IAS Exam results come out, and the impossible happens. Banwari gets through. He may actually end up as a ‘Collector’.

Mathura town is agog with anticipation. Notwithstanding that the bidding is now over for the groom, the bride selected, and the date fixed, everyone – from the ‘Daroga’ to the local gangster to the MLA – wants Banwari as a son-in-law. They are ready to use strong arm tactics to force the ‘Pujari’ to accede to their wishes.

The absurdity of the situation comedy that follows makes a mockery of the astute social and political commentary on religion, money, and the institution of marriage, we see in the first half of the movie. ‘Ekkees Tareekh Shubh Muhurat’ was born of an intelligent story idea – which probably explains why Sanjay Mishra, known for his good judgement on scripts, decided to act the part that was written for his own unique screen persona. Unfortunately, the execution of the film, especially in the latter half, lacks logic, aesthetics, and even basic cinema sense.