With its female lead as a secret weapon, this film evokes an era long gone 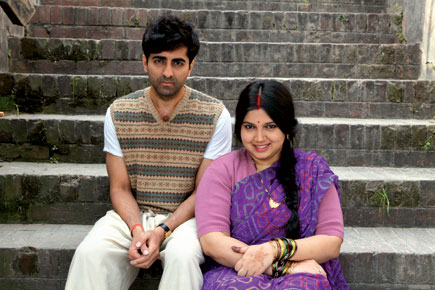 There isn’t very much going on in Dum Laga Ke Haisha but it makes you wistful for an era when people appeared to be simpler and happier. In truth, of course, people were probably as complicated and as unhappy as we are now, but such is the illusion nostalgia conjures and such is the chimera this movie summons for an audience.

Sometime in the 90s, a middle-class family in the holy city of Haridwar decides to get the ineligible bachelor in their house married. He is 10th standard fail, unable to conquer the English language and its board exam, and working in his dad’s audio cassette shop. The digital revolution is about to make the cassette business redundant, and CDs with their superior sound have already made their appearance in the music shops of Haridwar.

So life is precariously perched for Prem (Ayushmann Khurrana) when his family hitches him up with Sandhya (Bhumi Pednekar). It is a great deal set up by his dad (Sanjay Mishra). The arrangement provides an intelligent, good-natured and well-educated girl for his drop-out son. But Prem is furious. His angst is focused on the catch in the covenant—her weight— and he makes sure that she knows that he doesn’t think she is God’s gift to mankind. On the contrary, her largeness is repugnant to him, and he points this out to her, hurtfully, and in public. She then walks out on him.

All the actors are good, but Bhumi Pednekar as Sandhya is a casting coup. Smart, independent and realistic, she plays a character in complete contrast to that of Prem, a man who wallows self indulgently and dramatically in his own predicament. Yet, with all her pragmatism, she is soft hearted and sensitive and badly needs to feel wanted by her husband.

Pednekar’s Sandhya is the heart and soul of this absorbing movie. With a glance and tilt of her head, she can express a thought and feeling.