Any expectations of a taut thriller will leave you disappointed 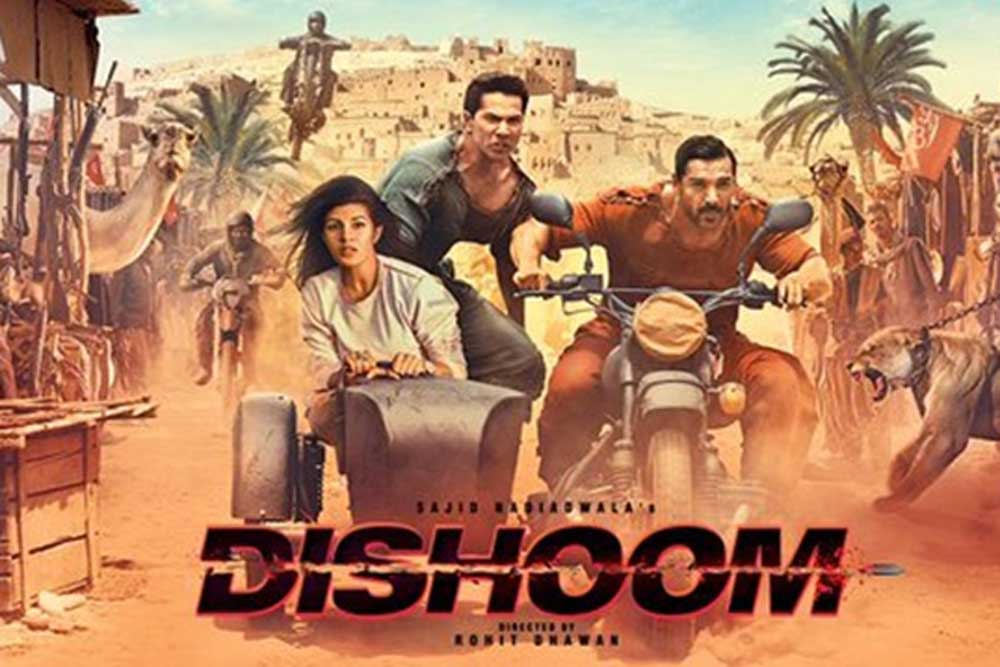 ‘Dishoom‘ has posh production values and good looking people, but little else. About a Virat Kohli lookalike who is abducted in the Middle East just before a cricket final with Pakistan, It is yet another attempt to create Indian espionage superheroes after ‘Agent Vinod‘ was given a RAW deal by the audience. Still, this movie has better pacing, is mercifully short and the women are easier on the eye.

The men are too, if one goes by the glad eye of Akshaye Kumar, playing a Middle Eastern ‘Queen’. He looks approvingly at the muscular bodies and the trim retreating figures of the leading men and murmers to himself – “Their fathers must have been bakers. They have such perfect buns”. Frankly, he has a pretty nice bun himself, but it is on top of his head, tied in an exotic hairdo.

Anyway, our perfect ‘desi‘ buns, the Indian super spy Kabir Shergill (John Abraham) and the local police officer, Junaid Ansari (Varun Dhawan) set out to look for India’s ace batsman, Viraj Sharma (Saqib Saleem). At first, the Ministry of External Affairs in New Delhi assumes that the kidnapping is an act of terrorism, but it turns out to be nothing more than a case of match fixing. This is revealed to us rather early in the movie and is probably the reason why the film has no real thrills and ends up as an amusing and well designed travel brochure on the stunningly wealthy desert kingdom where the film is shot.

There is also a nice bunny who approves of the buns. She is a girl called Ishika (Jacqueline Fernandez) who has a fetish for cell phones and picks them indiscriminately from the pockets of gentlemen she meets. She has just stolen one from the suspect, and it provides the buns with some vital clues.

However, good as it looks, ‘Dishoom’ can only serve to improve tourism to the Gulf Nations. Any expectations of a taut thriller will leave you disappointed.