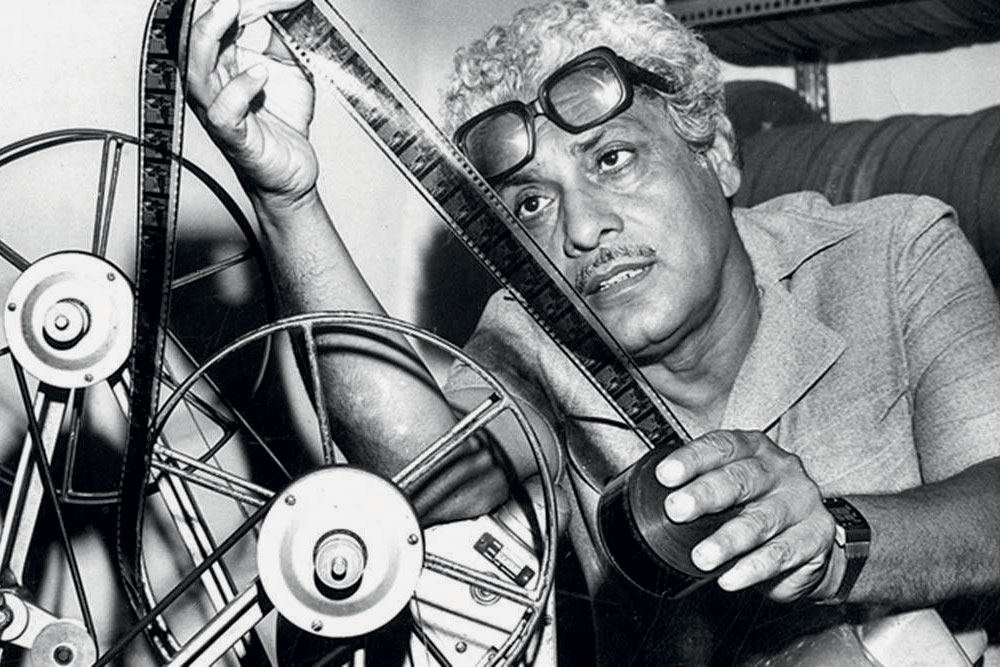 
IMPROPER CONDITIONING. Defective verbal communication, Unstable self-confidence. This is a case of love’s labour lost. And it needs special courtship pattern training.” This is the diagnosis of relationship expert Colonel Julius Nagendranath Wilfred Singhof Khandala in Basu Chatterjee’s little gem Chhoti Si Baat (1976). His subject is Arun Pradeep (Amol Palekar), a shy clerk in the Mumbai firm Jackson Tolaram, who cannot summon the courage to declare his love for working woman Prabha (Vidya Sinha). Colonel Singh, played by a pipe-smoking, pool-playing Ashok Kumar, schools Palekar in how to be a man in modern, middle-class India. From how to use chopsticks to how to shake hands, from how to look a woman in the eyes to how to play chess, the Colonel sends him back to Bombay a changed man with enough in his bag of tricks to dispatch his bumptious rival, Nagesh Shastri (Asrani).

If the cinema of Basu Chatterjee had not existed, it would have to be invented. Middle-class India had not found much representation in Hindi cinema before, with the reigning deity being the subaltern loner symbolised by Amitabh Bachchan who was cutting a swathe through Mumbai cinema with a series of searing portrayals, from the bitter police officer of Zanjeer (1973) to the resentful dockworker-turned-smuggler of Deewar (1975) to the angry illegitimate son with a grudge against his father in Trishul (1978). While Salim Khan and Javed Akhtar were giving the aristocratic upmarket Bachchan a working-class makeover, the middle class found itself increasingly reflected in movies which they usually watched on Doordarshan, due to lack of adequate theatrical spaces. At the height of ferment in India, which caused the 18-month suspension of fundamental rights during Emergency, Chatterjee’s Palekar trilogy—Rajnigandha (1974), Chhoti Si Baat and Chitchor (1976)—created a new way of being for the middle class, which allowed them to focus exclusively on their lives.


Unlike Satyajit Ray’s dark Calcutta trilogy—Pratidwandi (1970), Seemabaddha (1971) and and Jana Aranya (1976)—which proved that the increasingly corporate India was no country for honesty, Chatterjee’s cinema offered hope. Women could educate themselves and become part of the big city workforce of Mumbai like Vidya Sinha’s best friend in Rajnigandha, who has been married for four years but hasn’t had time to think of having children and is working towards a possible move to America. Men could think of moving cities to join their girlfriends if she got the better job, just as Palekar tells Sinha in Rajjnigandha. Families learnt to live together when two older adults decided to get married in Khatta Meetha (1978), mothers compared salaries of possible suitors with their daughters’ in Baton Baton Mein (1979) and a married couple has to run away to Bombay to rent a room to find some anonymity and intimacy in Hamari Bahu Alka (1982).

HIS IMPACT ON today’s filmmakers who are telling simpler stories rooted in their realities is unmistakable. Hardik Mehta, who directed the charming Har Kisse Ke Hisse: Kaamyaab in 2018, chronicling the life of an eternal character actor, doesn’t hail from a film family. He didn’t go to film school either. His father worked in a government bank and, in his younger days, was posted in Mumbai, with the office in Nariman Point, close to where the fictional Jackson Tolaram of Chhoti Si Baat was. “He would tell me: ‘Homework toh tu kal bhi kar sakta hai par aaj TV pe Basu da ki film aa rahi hai. Don’t miss it [You can do your homework any time, but today skip it and watch Basu da’s film on TV instead].’ So we ended up watching some of his films but not all. Which is why I was so surprised that when I made a short film called The Affair (2017) about the lack of space for Mumbai couples, a friend pointed out that it’s very close to Piya Ka Ghar (1972), and I was shocked to know that. Since, believe me, of the many Basu da films I had seen, somehow I had never seen Piya Ka Ghar, and look how life surprised me.”

Chatterjee’s Piya Ka Ghar, starring Jaya Bhaduri and Anil Dhawan, deals with a young couple trying to find space for themselves in a large family that lives in a one-room chawl in Mumbai. It was a subject that Parallel Cinema filmmakers, initially financed by the BK Karanjia-run Film Finance Corporation, would return to repeatedly. Sparked by Indira Gandhi’s 1964 policy as Information and Broadcasting Minister, these filmmakers included promising newcomers, such as Mani Kaul from the Film and Television Institute of India, filmmaker Mrinal Sen (for his first film in Hindi) and newcomers Basu Chatterjee and Kantilal Rathod. As film historian Ira Bhaskar has written in Routledge Handbook of Indian Cinemas, 1969 saw the birth of Parallel Cinema with the completion of their films Uski Roti, Bhuvan Shome, Sara Akash and Kanku, respectively.

Chatterjee’s Sara Akash, based on Rajendra Yadav’s novella and shot on location in a middle-class neighbourhood in Agra, dealt with the same issue in a slightly less literal way: here the young couple tries to find its emotional space within a joint family. Bhaskar points to themes which Chatterjee would reiterate in his movies: adaptations of literary material especially from the Nai Kahani movement, use of real locations and mostly unknown actors and evocation of the everyday.

More than that, it was a preoccupation with class, rather than caste, and the city, rather than the village. Hardik Mehta says the way Chatterjee shot Bombay Parsi colonies and their quaint lanes was a huge inspiration for him in choosing Dadar Parsi Colony as the main location for his debut feature Kaamyaab, where an old character actor of Hindi movies like Sudhir (Sanjay Mishra) would live. “Parsi colonies are very hard to get by to shoot, but I think the way a Parsi colony can convey the essence of middle-class Bombay [nothing else] can,” he adds.

Chatterjee was the master of telling simple stories that celebrated the common man, the small town and the strong woman, when most films had heroines for song and dance only. In an era when action and masala films ruled the box office, he had the courage to tell ordinary stories and made these special with his craft. We could see ourselves in his films and completely relate to the situations. “That was his genius,” says Amar Kaushik who made the rib-tickling social satire Bala (2019). “The ‘new-age’ and ‘content-driven’ cinema, as we call it today, were being created by him long ago. Thanks to him and Hrishikesh Mukherjee, I want my hero to be as relatable as Amol Palekar was in theirs,” he says.

It explains the rise of actors such as Ayushmann Khurrana and Rajkummar Rao, who can easily slip in and out of playing Mr Everyman. Raaj Shaandilyaa, the star writer of TV’s hit show, Comedy Circus, and director of Dream Girl (2019), starring Khurrana, says Chatterjee’s films carried the “fragrance of the middle class”. He loves Baton Baton Mein especially, for its “middle-class wala” romance, shown in a humorous way. And the diversity, which was more than just tokenism.

If Baton Baton Mein had Christian leads, Khatta Meetha had two old Parsis getting married. Choti Si Baat’s lead had two first names, Arun Pradeep, but no surname. Life in Delhi, but more so in Bombay, was all about BEST bus queues, local train huddles and coffee-shop breaks. As writer and actor Manu Rishi says: “Middle-class life is all about the conflict of dreams and needs. There’s always a comparison with the upper class, that is until one sees a movie like KhattaMeetha one Sunday at 6 PM, and you realise the beauty of the middle class and the lyrics of the wonderful song are embedded in you: ‘Thoda hai, thode ki zarurat hai’ (Have a little, need a little more).”

EACH OF HIS FILMS has a lesson in it, so lightly told as to be almost imperceptible, says Manu Rishi Chadha, who has written dialogues for iconic movies such as Oye Lucky! Lucky Oye! (2008). Choti Si Baat, for instance: that if there is truth with love, then one falls in love with the truth. There is no pretence, no extrovert or introvert, just a realisation that one’s weakness is one’s reality. Or Rajnigandha: your emotions tend to wander, your relationships weaken, your thoughts get tangled and your decisions can meander, but when you finally take a call, it is with a smile and just in time to keep the relationship from stumbling. That is the wonder of the middle class: there will be conflict and there will be resolution too, from birth to death. 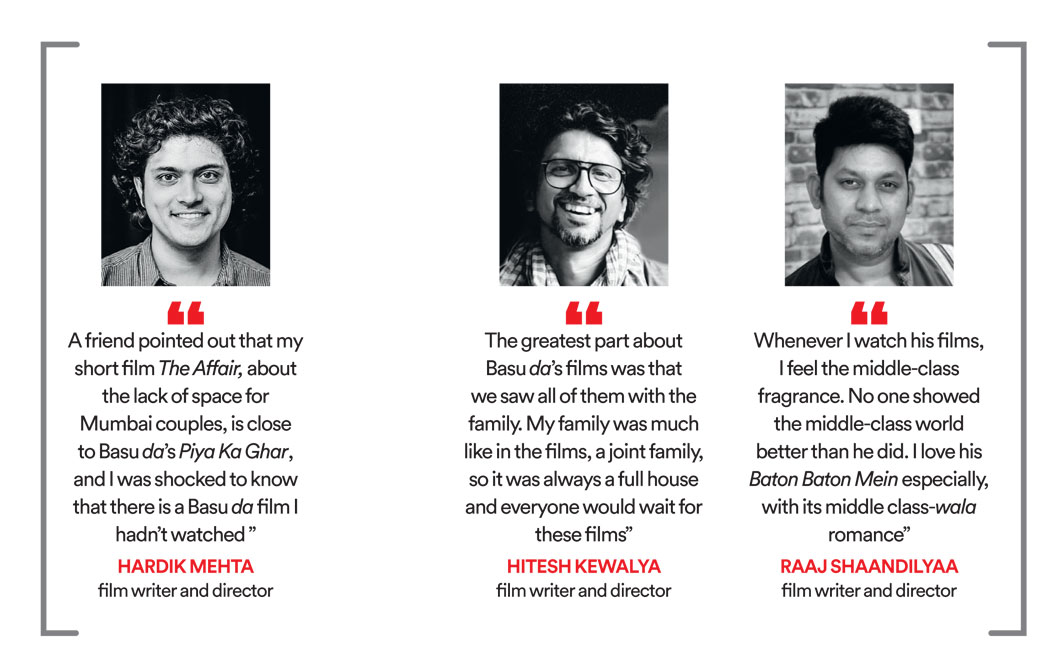 Chatterjee’s films taught Hitesh Kewalya, who directed the small town comedy Shubh Mangal Zyada Saavdhan (2020), what works for an audience. He would watch these films on Doordarshan as a child. “These were family films with real plots, real performances and concerns of characters with lots of quirk thrown in. And the greatest part about them was that we saw all these films with the family. So as a child I laughed when my mom was laughing or my dad was chuckling… my family was much like the films, a joint family, so it was always a full house and everyone would wait for these films,” he says. Chatterjee’s films, along with Hrishikesh Mukherjee and Sai Paranjpye, set the tone for the kind of stories he is trying to tell now. Chatterjee was head of jury at the Short Film Centre alongside International Film Festival of India, Goa, nearly seven years ago. Kewalya didn’t win anything, but the fact that Basu da might have seen his film and reacted to it gave him a big high.

So crystal clear are the memories of Chatterjee’s movies that Amar Kaushik can quote from one of his favourites instantly and vividly. Take the scene in Rajnigandha where Deepa (Vidya Sinha) is leaving Mumbai and Navin (Dinesh Thakur) comes to see her off at the station. Deepa waits for Navin to say something to her and express his feelings for her, but he doesn’t. She even keeps waiting for his letters in Delhi. But the moment she meets Sanjay (Amol Palekar) again, she melts and realises ‘Kya sach hai?’ (Is this true?) and where her heart actually is. Sanjay might miss noticing her saree and always be late but he never forgets to get rajnigandha flowers for her. What a beautiful love story of a woman, her hurdles and discoveries about herself!

The agony, uncertainty and acceptance of being a middle-class Indian woman, one half of a young couple just trying their best to live and love in ’70s India. That was Basu Chatterjee, the man who taught us how to consume modernity.