Lazy, simplistic and contrived, this tacky film has nothing even vaguely meaningful to say 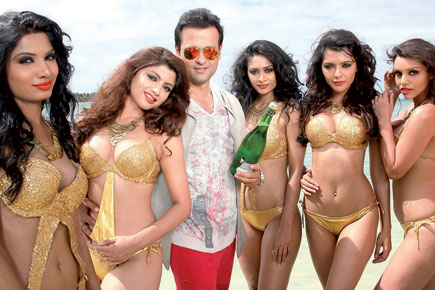 This is actually a post-calendar movie. There is not much ado over the selection of the ladies. They seem to be pre-selected by the head honcho (Suhel Seth) of the sponsor, who makes an appearance, like Santa Claus, to bestow his blessings on their initiation. The director, too, is in pre-determined selection mode and has decided that a ‘Calendar girl’ must first be indoctrinated with sleaze. The five girls selected are meant to represent the unity in the diversity of India, indeed the Subcontinent, as they are from Hyderabad, Goa, Kolkata, Lahore and from small-town India (Rohtak). However, it is Nazneen Malik from Lahore (Avani Modi) who comes in for special attention and is provided the most horrific narrative.

Nazneen is shamed in Pakistan, harassed by protestors in India for daring to look for work in Mumbai and dumped by her boyfriend in London for the same reason. In desperation, she joins an escort service, where one of her clients turns out to be the rich husband of the Calendar girl from Hyderabad. If that is not enough, on her last assignment, the diplomat she is supposed to service drops dead after a deadly cocktail of Viagra and alcohol. In panic, she runs out of the hotel and is knocked down by a car. That’s the end of the girl from Pakistan.

In this vein, without a single rounded character in the entire movie, we go through the activities of the other girls as they get mixed up with all the usual suspects in big, bad Mumbai—cricketers, match fixers, industrialists, media barons and moviemakers; in particular, Madhur Bhandarkar himself, this film’s director who appears briefly to make statements of shameless self-endorsement.

His previous films Fashion and Page 3 had a few things to say about the incestuous relationship between a certain kind of media and the celebrity culture of the city. This one, however, is a tacky piece of junk.