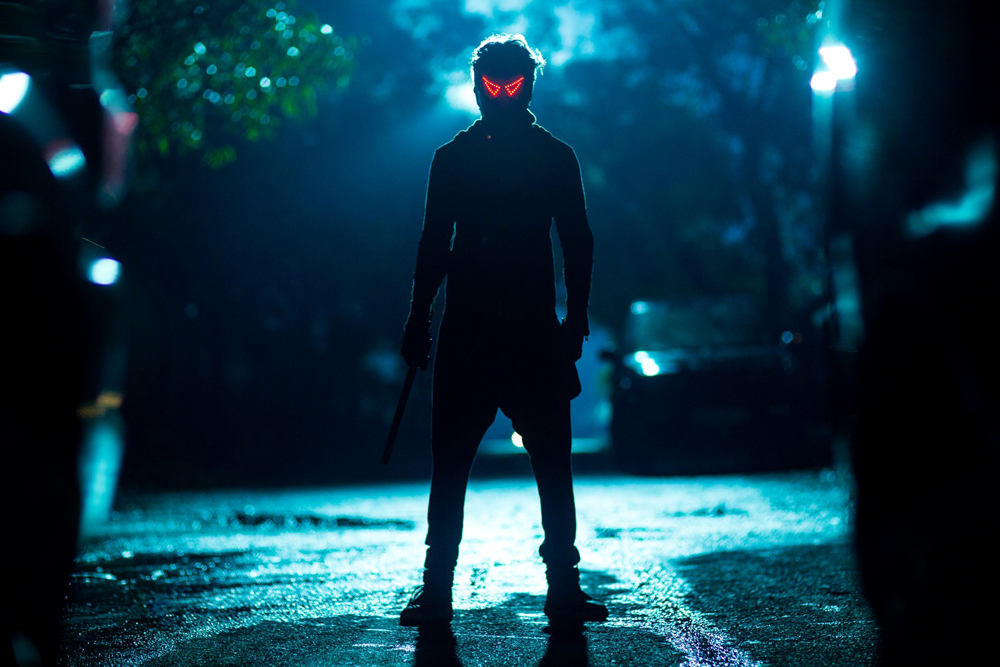 The content of Vikramaditya Motwane’s films have been in decline, and it is surprising that a film maker who made a movie as rich in characterisation and as moving in emotional resonance as ‘Udaan’, can run out of juice. Had he been prolific as a writer and director since then, it may have been understandable. But ‘Bhavesh Joshi Superhero’ is only his fourth film. It is a work that is completely out of the box for him – at least technically and stylistically.

This is a movie about about three young men in Mumbai declaring war on corruption by creating a masked superhero who fights injustice. They design the logo ‘Insaaf’ for their on-line movement, and, in the non virtual world, protest episodes of injustice and wrong doing with acts of physical bravery. The movie is quite consciously the cinematic equivalent of a graphic novel, and is told in comic book style; not the optimistic style of ‘Marvel’, as we are explained by a character, but the dark, gloomy and gothic style of ‘DC’.

So there are plenty of quick zooms, pans, close-ups, animated graphics, and in general, an abbreviated comic book style of narration that summarises the set-up of the film. The time frame at the beginning of the film is 2011, during the national anti-corruption rallies and the mass arrests of largely peaceful agitators in Mumbai. Till this point, the arguments are about freedom of expression, about the search for the inner soul of India, and about previous non violent movements in the country’s history that have led to dramatic social and political changes.

But the political idiom of discourse changes dramatically a few years later, and there is now much talk of discipline, authority and challenges to society from an excess of freedom. The language of protest has altered. The boys are now young working men, it is a post 2014 world, and though their zeal for a corruption free India remains the same, there is a distinct loss of energy for its support amongst two of the group – the man of the world, Sikandar (Harshvardhan Kapoor) and the nerdy Rajat (Ashish Verma). Sikandar has met a girl he likes and is planning to go to Atlanta and Rajat is of the view that society has become more zealous in implementing a right wing ideology, making the idea of change more challenging, and even dangerous.

These are interesting observations on the not so subtle tweaking of the polemics of political discussion since the election of a conservative Government. But Bhavesh Joshi (Priyanshu Painyuli) is adamant. He is the original crusader of the group, and will not dilute his ideological conviction to fit into the new India order. He dons his mask and his body suit and is ready to make the supreme sacrifice, if need be. He turns into a superhero and attacks the water mafia of Mumbai – the corrupt alignment between the Police, the Municipality and local Politicians that controls the city’s water supply.

This literal switch to superhero status marks the descent of Motwane’s movie to a ‘B’ grade action movie. If the subject weren’t so serious, one could compare the film here onwards to that hilarious satirical documentary, ‘Supermen of Malegaon’, in which tacky special effects are used to make a superman movie in the township of Malegaon.

Frankly, the last hour of ‘Bhavesh Joshi Superhero’ is embarrassingly bad, and you leave the theatre very disappointed.