The respectful distance between father and son 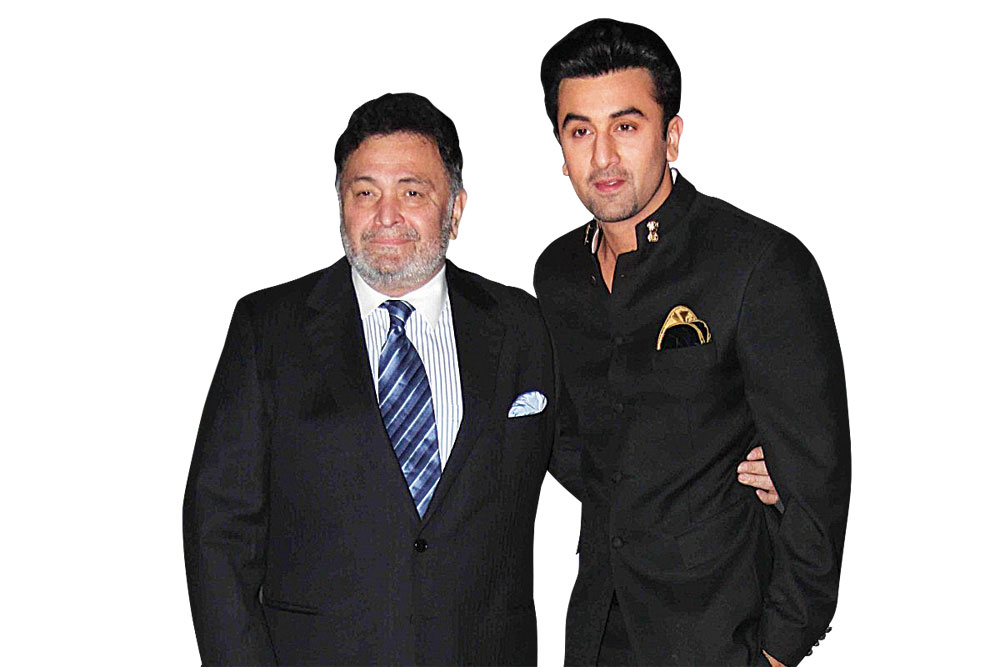 
JUST BACK last week from New York where he spent the last 11 months in treatment for cancer, Rishi Kapoor has already returned to work. The star quickly went back to the sets to wrap up the remaining portion of an Emraan Hashmi film he’d been shooting before he was diagnosed last year. A well-placed source reveals that Chintuji has also signed two new films likely to go on the floor soon. “It’s as if he’s trying to make up for lost time,” one source close to the Kapoors explains.

Friends of the family say the ailment was difficult on the Kapoors but if there was one positive thing that came out of it, it was that it brought Ranbir closer to his father. Ranbir has had a famously strained relationship with Rishi, and both have frequently addressed it in interviews. Ranbir has said he grew up “terrified” of his volatile father, and Rishi has admitted that because he was away working during most of his son’s formative years, he wasn’t a big influence on him and never became his friend in the way he’d have liked to.

Despite having worked together in a film (the ill-fated 2013 movie Besharam), the respectful distance between father and son had not been bridged, but friends of the family have said all that changed when Rishi had to be rushed off last year following his diagnosis. Ranbir took time off to settle his parents in New York and make sure his father had the best professionals treating him. He spent considerable time during Rishi’s first round of treatment and returned periodically, frequently with Alia, to check on his father. “Seeing his father so vulnerable, and in turn for Rishi to see Ranbir so committed to his recovery… it instantly changed things between them,” the source adds.

Earlier this week, Abhishek Bachchan began shooting a new film in Mumbai being produced by his friend, Ajay Devgn. The project has been tentatively titled The Big Bull and is being directed by music video veteran Kookie Gulati. The film is a biopic of Harshad Mehta, the Indian stockbroker charged with financial fraud in the 1992 securities scam. The title is a dead giveaway, but the filmmakers refuse to so much as name Mehta or confirm the film is indeed about his life, for the fear of inviting legal troubles.

This could be Abhishek’s next release after last year’s Manmarziyaan, although he will be making his small-screen debut in the second season of the popular Amazon original series Breathe, scheduled to drop shortly. In the last few years, the actor appears to have switched focus on to his other love: sports entrepreneurship. He’s been closely involved with his kabaddi team, the Jaipur Pink Panthers, and the Chennaiyin Football Club, which he co-owns.

The failure of Manmarziyaan was a crippling blow to his career, despite his earnest, well-regarded performance and the film’s solid critical reception. Insiders say at least a few projects slated to go into production with Abhishek were either indefinitely postponed or shelved after Manmarziyaan bombed. A family friend of the actor says: “It’s very unfair. Just as Abhishek was beginning to find his groove, just as he was growing into an instinctive actor, things hit a rough patch again. But he’s become very pragmatic and mature. He isn’t sulking or brooding, he’s focusing on the positives.” The last time he played a financial whiz, channelling Dhirubhai Ambani in Mani Ratnam’s Guru (2007), he got some of the best reviews of his career and a big hit.

This outspoken actor who had a career revival last year when he appeared in a successful streaming show is not hiding his disappointment over its underwhelming second season. He has privately admitted the production was “disorganised” this time and the script “far from watertight”. Asked if there’ll be a third season, he clapped back reflexively, “I hope not.” Ouch.