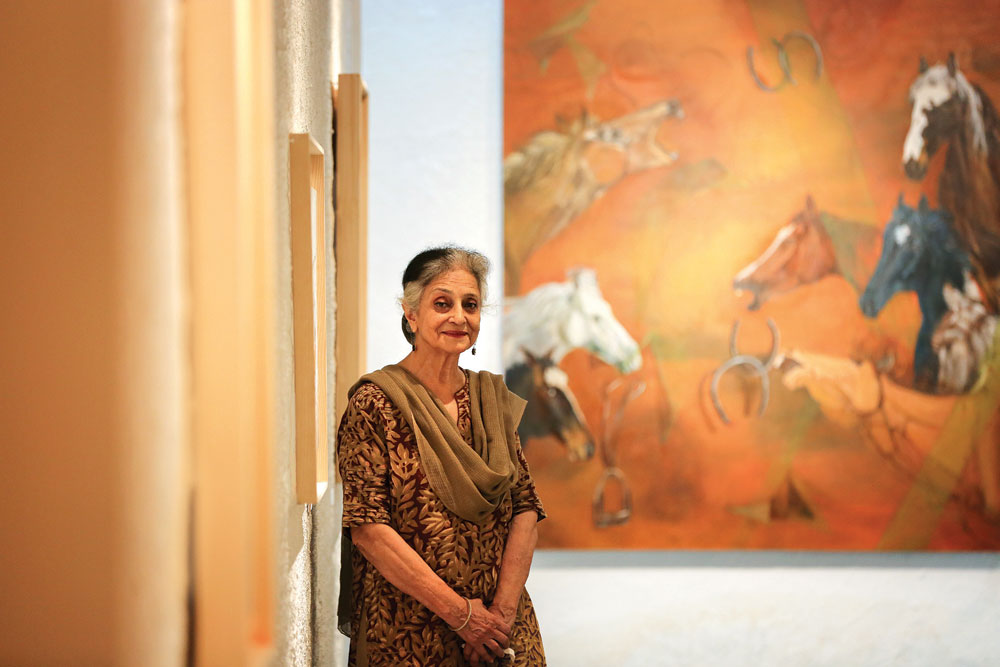 
ONE MIGHT THINK that 79 is an unusual age to have your debut solo art exhibition, but Todo Paintal makes it look effortless. The proof is not only in the artworks themselves, but also in the composed and articulate way she talks about her art.

At a recently concluded exhibition at Gallery Threshold, Delhi, titled Looking Back to the Future, a selection of her artworks was widely spaced on the white brick walls, giving focus to each work. Paintal’s daughter Tunty Chauhan is the director of the gallery.

The first works that Paintal pauses in front of are a series of delicate and detailed pencil sketches of ordinary people caught in different moments of the day, ranging from a rickshaw driver to a man sitting on the floor. Paintal, in her fourth year of the advanced fine arts course at Delhi Collage of Art, explains their origin. “An instructor, Ashish R, had showed us the painting we were to copy on Zoom and gave us maximum five minutes to complete, and we were not allowed to use an eraser,” she says. Paintal would have impressed her instructor not only with that assignment but with the other works as well. “Most of these,” she says gesturing towards all of the art displayed, “were done during the lockdown and were also part of our assignments.”

There is a range of styles and mediums on display, from oil to acrylic on canvas to watercolours. Some of the works that catch the eye include a watercolour of flowers, and a small still life of a jug with cherries glowing intensely red against the muted hues of the background. There are four small paintings in a row, jewel-bright with brilliant colours, including one of a forest with trees in autumnal colours at a hill station. There are also several portraits of Paintal’s family, including an oil painting of her husband, a retired lieutenant colonel lounging back in a chair with the family dog, Ruckus, at his feet. Paintal’s readiness to explore various techniques and her skill in mastering them, can also be seen in these family paintings. For instance, an oil painting of her grandson Yuvraj has been done with a palette knife, but the strokes are so seamless they could have also been done with a brush; another of her daughter Tunty has been created with extensive and intricate pointillism detailed on Tunty’s blue shirt, the sofa and carpet, and on the white walls, but not on her face. “It took roughly around 10 days. I used the back of a ball point pen to make the pattern, but I would not make them on her face,” says Paintal.


Paintal’s life is as rich and varied as her artworks. She is a quintessential army wife, elegant, well groomed and calmly capable. Her husband had fought in the 1965 and 1971 wars, and she accompanied him on his many postings. She always painted, but it was a hobby—one she greatly enjoyed, but essentially an amateur’s pastime. Then, four years ago, Paintal happened to observe a class at the Delhi Collage of Art, Safdarjung Enclave. The students looked so engaged and the work they were doing was so excellent that she went to the instructor and said, “I am 75 years old, and I would like to join this class. The instructor said, “Of course. There is no age bar.” She attended the course for a year, and then asked if she could join the advanced diploma course. The experience was enormously satisfying. “Everyone there was always so encouraging. I have really enjoyed it. The classes are so focused and intensive, yet there is such a light-hearted atmosphere, that it is never dull.” Paintal’s studies at the Delhi Collage of Art are not her first venture into the art world. “I always loved painting with oils, and I studied art with various instructors and institutions in the past,” she says. She attended a course at the Triveni Kala Sangam, and also studied under the acclaimed artist Anjolie Ela Menon in 1971, as well as studying briefly at Arpana Caur’s Academy of Fine Arts, and has participated in a few group exhibitions as well.

She is full of praise for her instructor Ashwani K Prithviwasi, who encourages his students to think for themselves. One of the demands he makes of his students is they aren’t to be derivative. They can break rules, but must find an original style of their own. This is a maxim which Paintal has embraced. One of the most unusual paintings is a watercolour of a brown moth painted on a printed page which manages to be elusive, bright and shadowy at the same time. What gave her the idea for this painting? “I like to try out everything new,” she says simply.

One section in the gallery consists of three large canvas oil paintings with several horses, painted in various poses. The spaces between the horses’ heads are filled with abstract triangular shapes. There is power and movement in the horses’ heads. Paintal adds that her husband, always the soldier, had observed that the horses were looking for direction the same way soldiers will look to a senior officer for orders. The largest of these took her six months to paint, and the artist needed to climb up on a table or a chair to paint and rework it.

Paintal’s background, as she notes, also reflects in this work as she grew up on a farm with horses. Her father was an engineer and she moved with the family to his various postings. She attended a Montessori school, and never forgot its emphasis on precision and letting children learn for themselves. This inspired her to pursue a BEd from the State College of Education, Patiala, after her BA from the Government College in Ludhiana. Like many women in her situation, she became a teacher. “I also took up teaching because that was the only thing I could do with my life in the army.”

Her husband’s postings took the family from Madras, Babina, Chharta to Dehradun and Wellington. Their three daughters, Tunty, Sonia and Ruhi, adjusted quickly, like other army kids. “The children found it hard at first to leave a place within six months but quickly adapted to seeing new places, and meeting new people, and they learned a lot of discipline.” The thing about the army, says Paintal thoughtfully, is that it is like a brotherhood. They all understand change. The regiment has been the biggest supporters of her work, she adds.

Paintal had also wanted to teach a Montessori course as it involved a methodical teaching apparatus aimed at tapping the potential of students. “Wherever I went, she says ruefully, “I was the oldest, but I had a lot of support.” One could say that teaching to studying art is a pretty big jump, but Paintal points out that one makes so many jumps teaching children.

She ran the kindergarten level Montessori school from her Delhi house for 34 years. She then decided she wanted to do a diploma course in art. “I never wanted to do anything else. All of it, including this exhibition, has been an awesome experience.” Painted on the gallery wall is a quote by the actor Tom Hiddleston, “You never know what’s around the corner. It could be everything. Or it could be nothing. You keep putting one foot in front of the other, and then one day you look back and you’ve climbed a mountain.” This could be the motto of Paintal’s life.