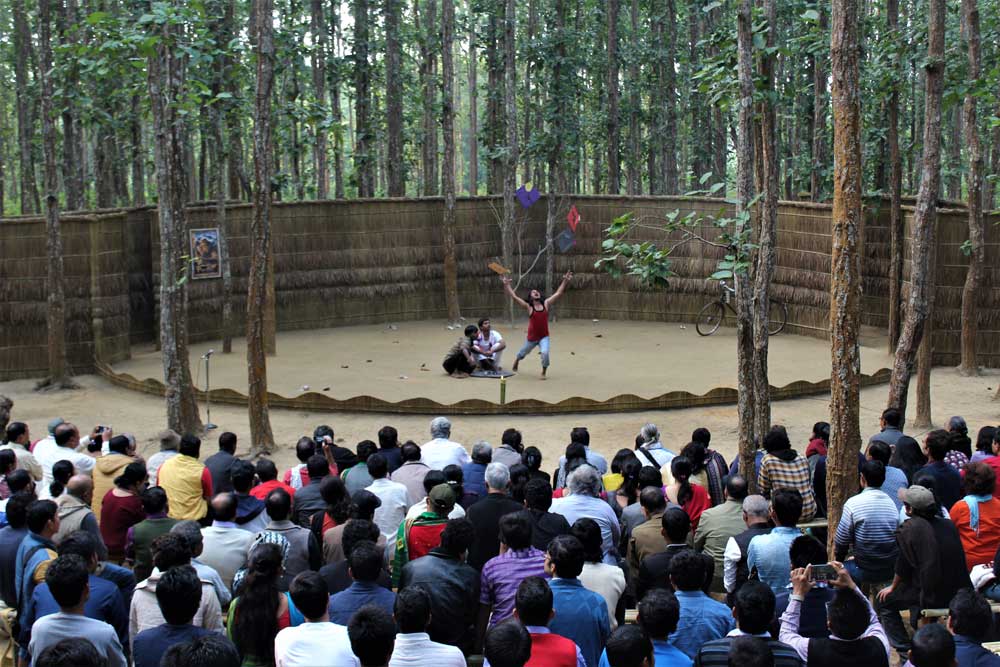 Gojen Rabha was busy distilling chokho (rice beer) and humming a tune from a play he watched that afternoon in a forest, braving the December chill in Rampur, a village near Goalpara in Lower Assam. “We do not sell chokho to anyone. We offer it to guests. Likewise, our dances, our songs and performances are not commercial,” Rabha says pouring a drink.

Rabha and his friend work in a rubber plantation in Rampur. Three days in winter, apart from the regular holidays, they also volunteer for a local theatre festival, Under the Sal Tree. The duo starts arguing over a Rs10 entry fee to the festival. “Look at all the crowd that is coming from Guwahati in big cars, watching the whole spectacle for three days for free. Ten bucks is nothing,” says the friend, pouring a last one before he prepares to catch the next performance with his wife, Sumati.

“It is only in last two years, the festival garnered so much attention. This is our festival to save the Sal, so no city people are going to touch the festival if we do not spoil our forests,” says Sumati grinning at the men. She adds, “Don’t you have to be at the gate to help the guests? You better find us a nice spot!” It was 5:45 pm, the sun had set more than an hour ago and mist had descended from the neighbouring hills on to Rampur, making it eerie and at the same time, homely—a perfect setting to hear a long story around a bonfire. Unlike several other theatre festivals, six is the last show in the evening while morning shows begin at ten.

After conceiving this festival in 2008, legendary theatre director and dramatist, Heisnam Kanhailal chose Rampur in Goalpara to host this festival by collaborating with Bandungappa Kala Kendra run by his student and noted Assamese theatre personality, Sukracharya Rabha. Over the years, Rabha has been bringing theatre groups from across the world, albeit quietly. Under the Sal Tree, this year was held between December 14 to 17, with support from Sangeet Natak Akademi. Borrowing from the Rabha community’s concept of Rasong which means ‘existence’ in Rabha language, Sukracharya says this festival is a means to extract the real expressions of an actor or a dramatist. “We do not use any sound amplification but rely on the acoustics and ambiance provided by the forest itself in bringing out a pure act. This festival is a quest for ‘self’ rather than finding some means to emulate or express an artificial self which actor cannot identify with,” says Rabha. Over the last eight years, this festival has changed the cultural landscape of this region.

“It was unimaginable for me to enter this area ten years back,” says Jaganmay Goswami, a young accountant and a theatre enthusiast. Due to the proximity to Garo Hills of Meghalaya, the region witnessed violence between the communities in 2003. “But we have moved far beyond those days. Even Garo people come to this festival now,” says Arjun, who goes on a long rant against the local MLA for bad roads. “Our only weapon against such callousness is through our culture, our songs and dances, our performances. You know Bishnu Rabha?” he asks. To the uninitiated, Bishnu Prasad Rabha, a cultural icon belonged to the Rabha community, who gave Assam one of her oldest theatre movements, Ban theatre. Rabha galvanised various communities across Assam and neighbouring states with songs and dramaturgy inspired by nature, peasant struggle and ideas of nationhood during the freedom movement. Efforts of such stalwarts seem to have paid off well.

At the venue of the evening show at Badungkduppa Kala Kendra, women from the village lit lamps and decorated a bust of the theatre legend, Heisnam Kanhailal. It was Kanhailal who brought the traditional Manipuri theatre form, Moirang Parba with the Western influenced proscenium theatre. Later, in the 1970s, Kanhailal challenged both proscenium and traditional Manipuri theatre by bringing a hundred odd women from Manipur’s only women market, Nupi Keithal for an open-air production called Nupilan (Women’s Movement). The occasion was historic for the residents of Rampur this year as Kanhailal’s wife, Sabitri Heisnam, a Padmashri awardee, was visiting the festival.

For a theatre aficionado, witnessing even the meeting of generations of theatre artistes and activists was a sight to behold in the rustic setting of Badungduppa. During a tea break between the plays, an audience gathered around a makeshift eatery where 71-year-old Sabitri Devi was demonstrating various aspects of voice modulation with Mumbai-based actor, Jyoti Dogra, whose critically acclaimed Notes on Chai was the last act of the festival.

Despite linguistic and geographical borders, these theatre groups revelled in the performative journeys that they took together, literally under the Sal trees of Rampur. “We chose the festival participants especially on the basis of who can adapt to a forest-based experimental setting. Voice modulation is really important,” says Sukracharya Rabha. It is only when one reaches Rampur, a realisation suddenly dawns upon the spectator that language could be least of the concerns in understanding theatre. The sylvan surroundings of this festival enhance this effect.

However, organisers are worried about the festival becoming a local picnic spot. This year it attracted many local VIPs from across the region. Gojen, who was standing at the back, starts giggling, “Poor Sumati! I think she and her friends have to get up their seats for these big shots.”

All the shows in the festival however started on time. Security personnel with Kalashnikovs protecting the State emissaries sat beside the local leaders of the Rabha Hasong Students’ Union even as the audience made enough room for Sumati and her friends.

With all the evening performances of the festival produced and performed by women actors, men including large contingents of security personnel had no option but to watch and learn. The audience remained glued to their seats in complete silence for Pakija Begum’s solo act in which she plays Padmapriya, a character based on a novel by acclaimed Assamese feminist author, Indira Goswami and for Pondicherry-based Savita Rani’s interactive act, RIP. These shows were followed by equally long conversations on women, men, relationships and families.

The proscenium was repeatedly ‘violated’ by performances, which followed their own contours. “The audience enjoys such violations,” says Polash Pratim Mech of the Oftas Group of Sivasagar, who presented his adaptation of William Shakespeare’s King Lear called Fall of a King. Using Chotal Bihu, a rare Bihu performance tailored for courtyards of Assamese household, Lear becomes an Assamese gaon burha or village headman in this play, even as Mech’s deft usage of Chotal Bihu transforms the stage that resembles an Akira Kurosawa set. On the next day, a nervous Illangovan who was not sure if the audience would be able to connect with Mystique Mirror produced by Chennai-based Manalmugudi Drama Troupe got a standing ovation from the audience for their visual extravaganza. The troupe presented a story of Kuhaimaravasigal (Cave Tree Dwellers), chased away from their habitats who turn into birds, abandoning their human existence. The forest, again, provided the perfect backdrop.

For Rabha and several others associated with this festival, more than providing a ‘unique experience’, the message of the festival is important. “The character of this festival lies in the use of locally available materials, improvisations on the space and sound without any artificial or pseudo devices. If we lose that character, it will all be lost,” he says. Perhaps the only hope for him is that already three different theatre troupes in Assam are trying to adopt this experiment to newer terrains.