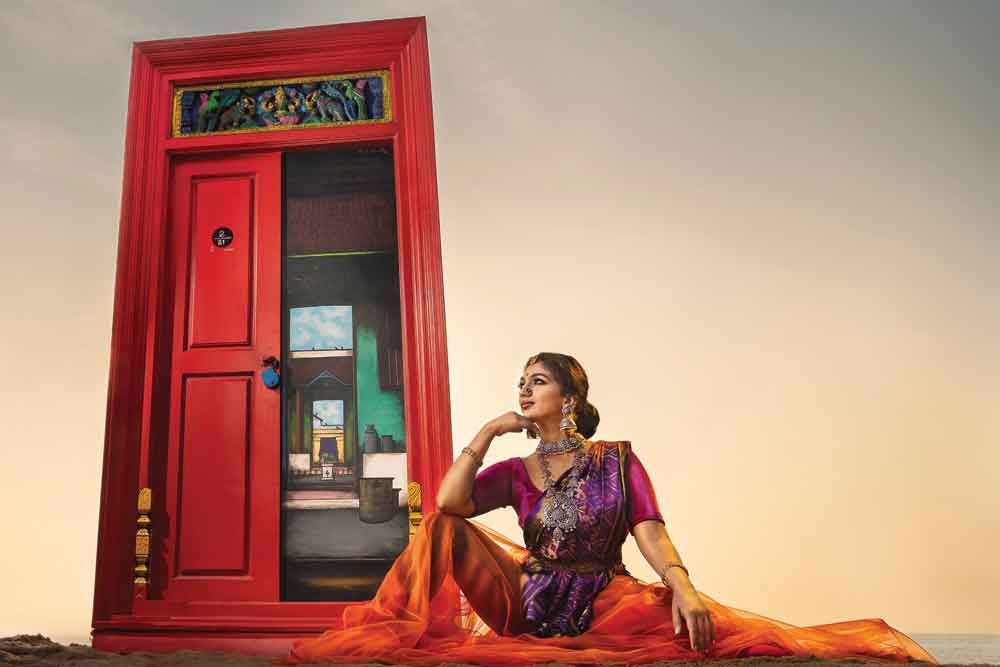 
ON MAY 9TH, 2020, Sophia Salingaros (@sophiasalingaros), New York-based Bharatanatyam and ballet dancer, who works during the day as a consultant for healthcare companies, went home to San Antonio, Texas, to visit her parents and work for a few weeks. As she spent time at her childhood home, one summer afternoon, she rummaged through her closet and was surprised at the number of Bharatanatyam costumes she owned. “I thought it’d be fun to shoot a video of me performing one jathi but wearing eight different costumes,” she says of the video that had her dancing to a jathi by Madurai Muralidharan. The video went on to garner more than 34,000 views on Instagram.

“When we—my father, who was my videographer and I—wrapped the shoot three hours later,” Salingaros recalls, “the sun had come down and the position of the light had altered.” The next day, Salingaros shifted gears from her Bharatanatyam costume, and wore an editor’s suit to create a 57-second video. The caption for the post read: ‘Re-wearing the costume reminded me how much I miss the stage; it’s as if my favourite identity has been put on pause.’ The post soon had 280 comments from fans, followers, and friends.

The live stage may have had to pause—momentarily, and rather abruptly—but Indian classical performing artists, millennials in particular, from across genres and countries, have used the time to their advantage, creating and building for themselves distinct brands that sparkle with unique narratives characteristic of their identities as dancers and the worlds they inhabit.

In the foyer of a large gated community, in Bengaluru’s IT hub, Bharatanatyam dancer, Pratibha Kini (@pratibha_kini), has, since January 2020 been religiously uploading one video per week on fitness and its impact on her journey as a dancer. “You see, it’s no secret that every industry has its own politics,” says 28-year-old Kini, an engineer who works in IT. “For a budding artist like me, to get an opportunity to perform isn’t exactly easy. Last year, I decided to take matters into my own hands, and start my own YouTube channel where I had the possibility of creating valuable content that was beneficial to the community.”


I don’t ever post for the sake of it. When an idea occurs, I see it through creatively and ensure it positions me as how I’d like people to think of me—as a versatile dancer,” says Simran Sivakumar, dancer

Kini naturally turned inwards; to what she knew best. She was lithe, strong, consistent with her workouts at a CrossFit gym close to home; she enjoyed lifting and had accrued the many benefits of a long-standing relationship with nutrition and fitness. With over 50 videos now, which tell of her practice and performance, fitness hacks, and a slew of videos on a range of topics relevant to dancers (such as whether to dance or not when you are on your period), Kini has grown her following significantly—YouTube (28.5K), Instagram (16K)—over the year. “I literally started from scratch, but it has been a very gratifying journey,” she says, “filled with so many learnings. Above all, it’s fantastic to have been able to access dancers from across the world, build trust with them, and in a sense, create for myself, an audience of my own without having to depend on anyone for it.”

In Hyderabad, speaking on behalf of the Aayana Dance Company (@aayanadance), Manognya Krishna Balaraju, its co-founder, admits that their online presence reflects the ethos of the company—“the stimulus to dance is often in the things that are around us; we find joy in telling a story through dance”. As a genre-bending dance company—Bharatanatyam, hip-hop, Indian contemporary dance—and using the language of improv, Aayana’s repertoire, especially on social media, has often been triggered by an artistic impulse to create an audience that is not necessarily used to consuming dance.

“It’s a blessing,” says Balaraju, of the brand’s wide and eclectic following— 56.2K on Instagram—“because it allows us the freedom to create work on things that we are utterly fascinated with.” Harry Potter, for instance. Foraying into Instagram Reels in October last year, Aayana Dance Company created The Hogwarts Reel where the five principal dancers jived—classical and free style—to a song. The reel garnered 4 million views for a caption that read, ‘We solemnly swear we are upto no good. Thank you, Instagram for everything you make possible.’

With great following, comes great responsibility. “You bet,” says Balaraju, “It’s overwhelming to be at the receiving end of so much love.” In the Bay Area, in Sunnyvale, Nitya Narasimhan (@nittuwit) says that what began as an act of sharing her dance with a larger universe, and in a manner that was real and vulnerable, has blossomed into her gathering a large and loyal Instagram family. Last year, in June, Nitya conducted workshops that raised funds and supported two not-for-profit organisations across India and North America. Narasimhan says she began engaging with social media almost naturally. “When I moved to the US six years ago, it became a way for me to be accountable to myself in the context of my dance,” she says, “In hindsight, I think people resonated with the fact that I was sharing a piece of myself through my practice.” The warmth of Nitya’s handle is not merely the yoga and dance videos she shares but also her dog, Kulfi, “a piece of [her] heart”, who has acquired near-celebrity status.

In Chennai, taking a break from a day-long shoot for Chennai-based photographer, Amar Ramesh’s Natya series, 23-year-old Simran Sivakumar (@simran.sivakumar), a graduate of Visual Communication, whose Instagram page has 96K followers says, “One’s following is not everything; content is really the queen.” That realisation—right from the start, has meant Sivakumar is conscious about constantly creating and sharing work that has a quality of “innovation” about it. “I’m always asking myself this question, ‘how am I standing out with everything that I’m sharing on social media?’”

On March 21st last year, just as the country went into a lockdown, Sivakumar started her quarantine series. She draped herself in a light blue saree, sat by a window in her home overlooking the empty streets, played one of her favourite songs—the iconic ‘Yamunai Aatrile’ from Thalapathi—and did a 59 seconds abhinaya piece that added another layer of expression to the song. The video quickly received 1,31,042 views and 436 comments.

An artist who seamlessly straddles genres—Bharatanatyam, Western dance, Bollywood—Sivakumar is conscientious both about quality and intent of content. “I don’t ever post for the sake of it,” she says, “I like to go with the flow. When an idea occurs, I see it through creatively and ensure it positions me exactly as how I’d like for people to think of me—as a versatile dancer.”

In December, last year, to mark the Tamil month of Margazhi, Dallas-based physician and Kuchipudi dancer, Pranamya Suri (@pranamyasuri) curated the Malyada series, a virtual celebration of Andal’s Thiruppavai, a set of Tamil devotional hymns. Stemming from her passion for the Thiruppavai and an opportunity to collaborate with like-minded artists, this month-long series that saw the coming together of dance, music and dialogue, helped make the content of the text, “universally accessible”. The impact of the series was more than mere numbers, as Suri admits. “We asked television channels if they could broadcast one episode a day. A whole host of people who don’t necessarily engage with the classical arts watched it and wanted to either start dancing or initiate their children into the world of the arts.”

Personally, for Suri, the series gave her visibility. “You see, owing to my medical training, I haven’t been able to perform in India for a really long time now. The series got me eyeballs especially amongst arts organisers, festival curators, dance enthusiasts and other young dancers whose arts I love and admire,” she says.

Unlike Suri, who admits she hardly engaged with social media pre-pandemic, full-time dancers like Chennai-based Kavya Muralidaran are crafting for themselves narratives that help enhance their presence on social media. Three years ago, following a degree in Visual Communication, Muralidaran started a YouTube channel of her own called VivRtti Dance Company. Literally meaning revolution, VivRtti has 44k subscribers and has earned for the dancer, not merely a distinct identity but also a global following. “It has helped me build for myself, a community that participates and supports me in my journey as a dancer,” the 21-year-old Muralidaran says. Her social media engagement has translated into a hundred students from across continents and time zones who learn dance from her.

It’s fantastic to have been able to access dancers from across the world, build trust with them, and create for myself an audience of my own without having to depend on anyone for it,” says Pratibha Kini, dancer

Muralidaran also believes in collaborations and pushes the envelope with cutting-edge performances. The year of the pandemic also seeded her dream project, Gandiva, a Chennai-based Classical Contemporary fusion band created by her and artists, Sai Vignesh and Navin Shanker that arrived on social media this January. Fusing dance and music, the band re-envisages traditional pieces from the classical repertoire and makes them accessible for a modern audience. Shiva Tandav, the first track, has since its release, crossed 290K+ hits on YouTube and 2.5 million views on Instagram.

But these dancers are also aware of the ephemeral nature and perils of social media. Salingaros recognises the many roles that dancers have had to assume because of the pressure to be seen and heard, virtually. “These videos have become the bane of our existence,” she says, “We’ve had to fit our dance into a social media format and while it’s easy to count popularity based on that, it’s also easy to fall into this trap of likes and comments.” Narasimhan admits that in the year of the pandemic, she has engaged with social media much less than she normally does. “It felt overwhelming, if I have to be honest,” says Narasimhan, “it seemed like the content the audience wanted to engage with had become too commercial for my liking. The rawness of sharing has faded because social media has become the only way for artists to share their work, which is a boon no doubt but, personally, I’d prefer a balance of both.”

Even as artists grapple with social media dilemmas while showcasing interesting and experimental work that helps carve identities of their own, it’s worth remembering Suri’s words, “No denying how crucial social media is to networking in the arts, I keep reminding myself, every now and then, that the arts itself is greater than the individual.”