Without pressure but without pause. That is the slogan of change in Cuba today 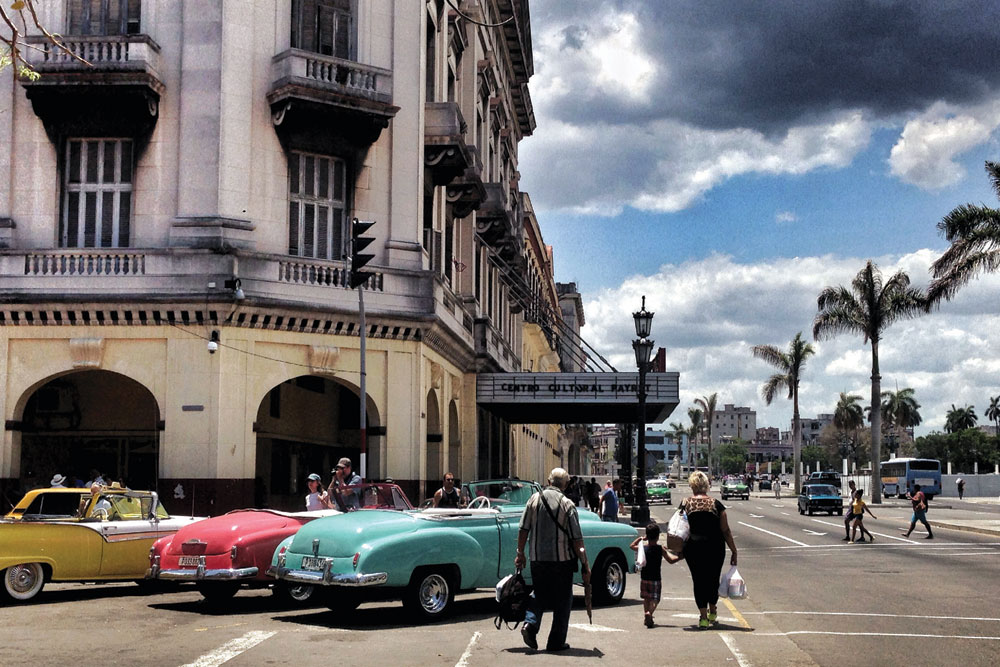 IF I HAD TO offer a metaphor for Cuba at this moment (and really, everyone who’s visiting Cuba at this moment feels they must offer something), I’d go for the tiñosa—the humble turkey vulture that circles the skies of Havana, the valleys of Viñales, and the hundreds of José Martí statues that dot the island. I think of tiñosas as gringos, patiently circling and waiting, and of the entire cigar-shaped country of Cuba as a delicately rotting pork chop in the sun.

Friends who have visited Cuba before—in the time of the Período Especial, which has that trademark Fidel touch of making a bad thing sound good—tell me that there has always been an element of the predatory in Cuba. Hundreds of prostitutes lining the Malecón, Havana’s version of Marine Drive. Oily businessmen parading the leafy streets of Vedado with their mulatto of the month. Meat so scarce, all the animals would disappear from the streets and reappear on kitchen counters. All manner of scammers and seekers flocking the island in search of sex, cigars and Baccarat crystal, while Cubans themselves were trying to make that jump across 145 km of ocean to Florida. Castro called those Cubans who left ‘gusanos’ or worms, but as my friend Jorge tells me, gusanos are the second highest contributors to Cuba’s Gross National Product. “When those worms return, we say, ‘bienvenido señor’—show us the money.”

When I arrived in Cuba, it was just after the historic cruise ship from Miami entered the Port of Havana, the first in almost 40 years. The Obamas had come and gone (not received by President Raúl Castro at the airport, although every road the First Lady traversed had been hastily paved and Cubans were still affectionately calling those streets ‘avenida Michelle’). The Rolling Stones had also come and gone, Mick Jagger telling a crowd of half a million people, “I think the times are changing.” And it’s true. Suddenly, Cuba is all about change. And it isn’t just returning Cuban exiles who are rushing to get there. Everyone wants to get to Cuba before the gringos arrive, including the gringos themselves.

Karl Lagerfeld sashayed in with a massive entourage, lighting up the Paseo del Prado for a Chanel show unlike any other. Kim Kardashian and Kanye West had been spotted cavorting around Hemingway’s old digs. Vin Diesel and Charlize Theron were shooting scenes for Fast & Furious 8 in the bylanes of Habana Vieja. But amidst all the glam and glitter, the thing Cubans were most excited about was the return of the potato. For five years, the potato had disappeared from Cuban markets due to a strange diesel allotment scheme. Reynier, a Cuban friend, who looks like a tattoo-frenzied Abercrombie & Fitch model, told me how people in his village had to queue up for two hours to get hold of a measly tuber. Now, in restaurants and bars, papas were reappearing with panache.

As a first time visitor to Cuba, you take note of perspective. There are the old streets of Havana with Spanish-colonial houses standing neck to neck—some of them crumbling, others with their fretwork and balconies perfectly preserved. Buildings that were once casinos are now hospitals, whorehouses have become cafés. The trees seem to collectively belong to the tropics and the temperate. Mango in heavy bloom. Flame of the forest, laburnum, palm, bougainvillea. But also blossoms. Streets and streets of carpeted pink blossoms. And then there are the cars—curvaceous and audaciously coloured—the most exciting byproducts of the Cold War. These cars are grand American 1950s in design and build, but they run entirely on Russian parts. You sail past the Floridita and the Hotel Inglaterra, where some four-piece band sounds like they’ve been jigging it since the time Hemingway and Greene were knocking about in these parts with a daiquiri or mojito in hand. The essence of Havana is so inherently decadent that six decades of a communist government hasn’t managed to quell it.

But there have always been two realities in Cuba. The outsider’s and the insider’s. You go into a Cuban home and behind the beautiful façade, there will be contradictions. There might be a Steinway in the living room, but perhaps no beer in the fridge because there’s been a shortage, and besides, the fridge looks 150-years-old, jerry-rigged to work. The floor tiles look like they could belong in a museum, but the upholstery and antimacassars also look like they could belong there. Five-year-old copies of ¡Hola! magazine share shelf-space with Shakespeare. But the really odd thing about Cuba is that people genuinely talk to each other, as in make steady eye contact. In the streets, people ask for directions. At dinner parties, there’s no nervous eyeballing of cell phones because in Cuba there’s no 3G. The houses aren’t fitted with routers, the café’s don’t have passwords. If you want to get connected, you have to go to one of the few designated wifi spots, buy a ticket for an hour and hook in. (Which explains why many Cubans didn’t give a toss when Kim Kardashian visited their island. Many of them didn’t know who she was.)

The Rolling Stones had also come and gone, Mick Jagger telling a crowd of half a million people, “I think the times are changing.” And it’s true

The other thing that’s contradictory about Cuba is the money. There were at least three currencies at play when I was there: pesos (used by Cubans), CUC (Cuban convertibles, almost on par with the US dollar, used by tourists), and a separate rate for business enterprises. Doctors and engineers earn the equivalent of $30 a month, but a person who opens part of their house for tourists—a casa particular, something only recently sanctioned by the government—can earn up to $30 per room a night. Cuba provides more medical personnel to the developing world than all G8 countries combined, but if you could earn your monthly salary in a single night as a B&B owner, would people still want to become doctors?

And then there are the scams. The variety and ingenuity of these almost makes getting scammed worthwhile. There’s the Buena Vista Social Club scam, where they prop up some octogenarian guy with a tweed peak hat in front of a keyboard in a café where they serve overpriced watery Cuba Libres, and someone will lure you in saying how lucky you are to be visiting for the last remaining survivor of the BVSC’s anniversary. And of course, you go. There’s the leche scam, which involves a woman who may or may not be the mother of the child she’s rolling about in a pram on a search for some powdered milk— so you buy her enough to assuage your guilt, and as soon as you’ve turned the corner, she goes back to the shop with the precious milk and splits the profits with the shopkeeper. The museum scam—where a guard yanks you over and force-feeds you the history of Napoleon, then whispers to be paid, but not too loud or else she might lose her job. But the most inventive scam I heard of was conducted by the young neighbourhood kids who had made 2 CUC tickets to sell to the gringos for May Day parade. It is a free event.

THE SLOGAN OF change that’s currently being bandied about in Cuba is: ‘Sin prisa pero sin pausa’ (without hurry (or haste) but without pause). When you ask people about the changes they anticipate with American relations thawing and Fidel finally hanging up his track suit, the reactions are usually a measured, ‘Let’s wait and see.’ Some people say, “What change? We have been talking about change for years but we have seen no change.” But friends who have been visiting Cuba over the past 25 years attest to a slow opening up. In the span of a few weeks I was taken to a fabulous new art collective, Arte Continua, an abandoned cinema theatre converted into gallery space; to a dilapidated flatiron building, whose owner hoped to convert into a bar; and to a nightclub-cum-art space called Fábricade Arte Cubano, more trendy than anything you’d find in Berlin. But with Cuba’s track record, outsiders remain nervous about investing (anything can be taken away at any time), and insiders are nervous about hoping (because the more things change the more they stay the same).

To describe the curious effect that Cuba has on a person, they say that when you first arrive there you want to write a novel. After a week, an article. And after a month, you don’t want to write anything at all. I applied that dictum to mojitos in reverse. On the first day, you politely decline because swilling rum in the middle of the day feels louche. After a week, you’re picking the mint leaves, and after a month you’re coco loco.

Mostly I felt like the over-romantic tourist who wanders around the streets of a strange town and exclaims how happy the people all seem. In Cuba, I thought, they’ve got their music, their pachanga and samba, their cigars, their free dental, free healthcare (even though the best doctors work outside the country), and free education. Nobody is starving in the streets and hardly anyone begs. And isn’t it nice to prolong the lives of gadgets? To ride around like a movie star in one of those skin-cancer convertibles (as the taxi driver of a more orthodox yellow cab called them. “To think,” he told me, “the gringos even pay for this skin cancer!”) And isn’t it nice to not have a clue about who Kim Kardashian is? But soon you begin to feel the press of the world. You look up at the tiñosas hovering and sense that crazy restlessness that everyone on that island feels. And you begin to seek the horizon.