A stash of lost-and-found songs predating Independence reveals the revolutionary face of one of India’s greatest musical talents, Salil Chowdhury 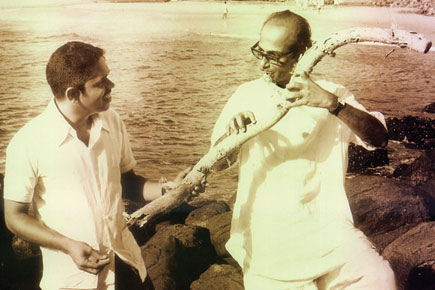 A stash of lost-and-found songs predating Independence reveals the revolutionary face of one of India’s greatest musical talents, Salil Chowdhury


Careful! Hold the red flag of freedom high with strong hands! / Our workers, raise your arms / Our peasant friend! Raise your sickle, and make sure it is sharp! / Be prepared for your last war! / We must have our rights / Even if we lose our lives. / We are prepared to give all our blood / That will only make our Red Flag even more Red!

This song, a call to farmers to raise arms against exploitative landowners, is part of a rare collection of protest songs from the 1940s, which once rung loud in the streets of Bengal. Many were banned during the time of India’s freedom struggle and some were almost forgotten in the period after Independence. Rediscovered recently, the surprise is that they were composed by a music director we know more for soft and dulcet hits that melded classical with folk music.

The Salil Chowdhury we are familiar with had little complaint with the world. His preoccupation, in songs like Aaja re pardesi and Suhana safar aur yeh mausam haseen (both from the film Madhumati, 1958), was mainly with affairs of the heart.

But then Salil had several talents few people were aware of. He was a poet, a writer and played multiple instruments like the flute, esraj, violin and piano. Fewer still knew of the rebel streak that had triggered the early part of his musical career. “If one closely studies Salilda’s lyrics, one notices that Salilda went through four phases: the revolutionary, awakening, enrichment and finale,” says Gautam Choudhury, one of Salil’s ardent admirers and a dear friend, who has brought these forgotten songs into the public domain once again.

Born to a doctor’s family in Assam in 1922, Salil grew up listening to his father’s vast record collection of Western classical symphonies and contemporary Bengali music. Self-taught on the flute, eight-year-old Salil formally started learning music at his uncle’s local music club in Kolkata. There, he also mastered instruments such as the piano and esraj.

But it was his father’s strong anti-British sentiments, sympathy for oppressed tea garden workers in Assam, and radical socio-political thinking that rubbed off on Salil’s young mind. World War II, the Bengal famine, local farmers’ Tripartite movement, Indian Naval Mutiny and India’s struggle for independence couldn’t but leave a deep impression. By the time he was in college in the early 1940s, Salil wanted to do his bit for the masses.

In 1944, Salil joined the leftist theatre group, the Indian People’s Theatre Association (IPTA), as a writer, composer and musician. It was during his time here that he composed around 30 protest songs. The team from the IPTA, also known as the Bharotiya Ganonatya Sangha in Bengal, travelled through villages and cities singing these songs to create awareness of the rampant social and political injustice prevalent then. Salil called these compositions Chetonar Gaan (songs of consciousness).

Salil composed the above Bhango bhango bhango kara during the Free Andaman Prisoners movement. In Karaar duaar, also composed at this time, he reminds people not to forget the sacrifices of Khudiram Bose, Bhagat Singh, Surya Sen and the martyrs of Jallianwala Bagh. Aayre poushaali baataase celebrates the new harvest after the bloody sacrifice that farmers had to make during the Raj. This song, incidentally, was to be used in one of the early Bengali films Salil composed for Rickshawala—which in 1953 became Bimal Roy’s Do Bhiga Zameen. Then, Aamra kishore dal reminds listeners of the power of youth. And, during the All India Railway Strike in 1948, came Railmojurer bahur jore:

After Salil’s death in 1995, Gautam Choudhury, while researching the composer’s nearly 400 Bengali songs, stumbled upon these rare renditions. This led him to study the political history of West Bengal and India in the 1940s, and finally to the IPTA, the organisation that had helped the maestro disseminate these songs.

“A new door opened up for me,” says the 71-year-old Gautam. “I discovered references to many songs Salilda had composed during the 1940s. This led me to travel to South 24 Parganas of West Bengal, where he was most active politically. There I met many of his old friends from the IPTA who remembered the songs.”

Aware of the worth of these rare songs, Gautam promptly started recording the interviews and songs. It took him more than 10 years to collect and document around 30 such songs, have a selection recorded by the IPTA and made available to listeners. The result is an album titled Songs of Consciousness, which features 12 powerful protest songs.

The album is out courtesy Gautam’s personal investment, with voice contributions by the IPTA, students of Rabindra Bharati University and Sayantani Majumdar, and with music and choral arrangement by Goutam Ghosh. To think the same composer had Rajesh Khanna humming Kahin duur jab din dhal jaaye just a few years later.

(For more information on the protest songs, go to www.salilda.com)