The People in Their Heads

A father tormented by visions of his dead son, a boy battling dreams of azaadi and football, soldiers fighting their inner demons... Djinns of Eidgah is a deeply disturbing play on Kashmir 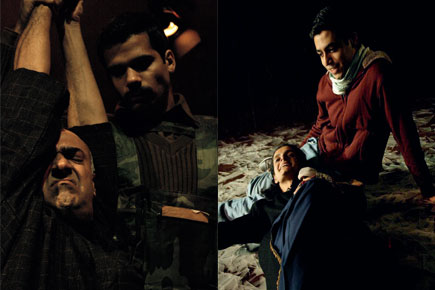 A father tormented by visions of his dead son, a boy battling dreams of azaadi and football, soldiers fighting their inner demons… Djinns of Eidgah is a deeply disturbing play on Kashmir


One Sunday in the last week of June, Djinns of Eidgah played at Mumbai’s Prithvi Theatre to an audience of regulars. Later, in the cafe outside, they were heard discussing the issue of Kashmir. “I don’t know anything about it. I should read up on it,” said a youth in dreadlocks. Such was the impact Djinns of Eidgah had on their minds. A deeply humanistic outlook makes Djinns of Eidgah one of the most rewarding plays on the Indian theatre circuit. It puts the bullet-torn Kashmiri soul, whether Pandit or Muslim, in a spotlight few have had the nerve to.

Theatre-goers will revel too in the sheer power of this multi-layered piece of writing, and the excellent cast led by Rajit Kapoor. The protagonist Dr Baig is a psychiatrist in Srinagar who is also a peace negotiator with New Delhi. Dr Baig is traumatised by horrific visions of his son Junaid, who was burned to death by fellow Kashmiris. His charred son wants to speak with him, wants to hear a story—in defence of the violent fight for azaadi. The peaceful Dr Baig shoves away the phantom. His most difficult patient awaits his help.

Fourteen-year-old Ashrafi believes that djinns walk among Kashmiris, and that her doll is one. If she is to heal, she must confront her repressed memories. Ashrafi’s mental age got stunted at nine, after her father’s death. Catharsis will help her move on—so Dr Baig hopes. But Ashrafi is not the only one around with a wounded psyche.

Post-traumatic stress is a disorder without borders, and it has afflicted even the Indian soldiers posted in the neighbourhood. Afraid of being lynched to death by protestors, they suffer an episode of hysteria in which they go to the extent of drawing weapons at one another. These soldiers are clearly disturbed themselves, but have been entrusted with keeping the peace, ostensibly for Ashrafi’s sake. Says one soldier to another, “You can shoot. You must shoot. We can shoot anyone.”

In this case, ‘anyone’ is Bilal, Ashrafi’s brother who dreams of going to Brazil, the land of the Beautiful Game, and becoming a football player. Bilal is shot by a psychotic soldier. The shooting takes place after Bilal visits the mortuary where the bodies of his pro-azaadi friends lie. Bilal just wants a pair of football shoes that his friends had promised to lend him.

But when he uncovers their bodies in the mortuary, he notices that they have no feet. “No feet, Ashrafi! No feet!” He takes Ashrafi and runs away to vomit. It is a foreshadowing of his own death, and we are left to imagine what will happen afterwards, when azaadi protestors armed with stones confront a bunch of highly-practised, psychotic trigger fingers.

In the end, the gentle Dr Baig and his young patient are left as observers—the very old and the very young—as Bilal’s generation of young Kashmiris have an extended stay in limbo or the mortuary and Indian soldiers battle their own inner demons.

Who is sane, who is insane? That is the paradox of Djinns of Eidgah. Where Bilal has his stones to lob at the soldiers, Dr Baig, the non-violent one, believes in dialogue with Indians. Even Ashrafi confronts her inner djinn—an exemplar of violence—and banishes him from her psyche. Does this make the two the sanest of them all?

Playwright Abhishek Majumdar has created Djinns of Eidgah with enough layers and nuances to make up a neat little book. The power struggle between hysterical Indian soldiers, the conflict between Bilal’s football dreams and the peer pressure on him to join the azaadi movement, and Dr Baig’s assistant’s choice to let her daughter join the movement when she grows up, could all be one-act plays in themselves, as could Dr Baig’s inner dialogue with his dead son. But all of this is brought together on a single stage in a little less than two hours.

“I approach my writing like a musical score, in terms of layers,” says Majumdar, “It’s a subconscious process.” This, he adds, is the second play of a trilogy. The first was Rizwaan, based on the poems of Kashmiri poet Agha Shahid Ali. The third play is in the making. “It doesn’t have a name yet,” says Majumdar, “It is a monologue of a Kashmiri Pandit.”

Djinns of Eidgah also sets new benchmarks in the use of space. Men dressed as Indian soldiers move the props between scenes. The props are minimalistic—a chair, table, doll, gun, stone and a few toys—on a stage sliced into two sections, the inner one being in turn a room, a street and a mind space.

The protagonist of the play, Dr Baig, is motivated by an inner need to heal, to understand, to empathise with both militants and soldiers, but he is on the other side of a generational divide. Yet, he remains stoic, hopeful of a breakthrough. This lynchpin, perfectly cast, is Rajit Kapoor—who is famous for playing Gandhi in The Making of the Mahatma (1996) though his fans also recall his delightful role in a TV series as the Bengali detective Byomkesh Bakshi. His 20-odd films include Shyam Benegal’s trilogy Mammo, Sardari Begum and Zubeidaa. Here, he gives all he’s got to the stoic, brooding character of Dr Baig.

Dr Baig’s dead son Junaid, who visits him as a hallucination (or djinn?), is played by Ali Fazal, a rising star. Fazal’s Junaid is in turns a boy clamouring for his father’s attention and an idealistic militant. When he’s not berating his father for failing to understand his politics, he wants to hear the story of Amir Hamza, the holy warrior.

Faezeh Jalali as Ashrafi seems perfectly comfortable in a setting where djinns and humans jostle each other. Her Ashrafi conveys a sense of teetering on the seesaw of irrationality and lucidity, and not without a humorous insight into her condition that may (or may not) be Jalali’s own.

Adhir Bhat is fully in place as the awkward out-of-place teenager Bilal. And Neil Bhoopalam as the psychotic soldier is in turns farcical, pathetic and horrifying. He provides the perfect contrast to Dr Baig’s character.

In his cameo as a soldier succumbing to hysteria, Ashwin Mushran recalls Yossarian in Catch 22. Like Yossarian, Mushran’s soldier is dead set on staying alive. If that involves killing, “it is not personal”, he amiably assures Dr Baig in a hostage scene. Mushran (whose father, incidentally, is a Kashmiri Pandit) is also good at dark comedy, especially in his banter with his psychotic colleague.

It might appear strange that Djinns has been directed by Briton Richard Twyman. But Mushran believes that his origins have worked to the play’s advantage, if anything, since “Richard didn’t come with any baggage or preconceived notions. He directed it as a play.” In contrast, the playwright has had a long engagement with the Kashmir issue. “Growing up in Delhi, I had many friends who were Kashmiris,” says Majumdar, “And three years ago, I was working on the play Rizwaan. That was my entry point to the Kashmir issue.”

And now, Majumdar says, Rajit Kapoor is planning to take Djinns of Eidgah to the Valley. That should be quite a show.