The Painter of Silence

Why the work of Gaitonde, the artist who defied language, feels so much at home at New York’s Guggenheim Museum 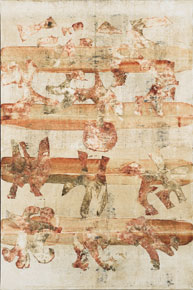 Why the work of Gaitonde, the artist who defied language, feels so much at home at New York’s Guggenheim Museum

There was never much written about Vasudeo S Gaitonde, the great abstract painter born in Maharashtra in 1924. He didn’t make it easy to put his work into words. The artist Baiju Parthan has said that Gaitonde “defies language”. Even the paintings themselves he mostly left untitled.

Fame was never Gaitonde’s forte; he lived simply in a one-room rental apartment in New Delhi’s Nizamuddin East for most of the years in which he produced his most celebrated work. But over the past decade, Gaitonde has quietly cemented his status as one of the most important Indian artists since Independence. Last year in Mumbai, at Christie’s first ever auction in India, a Gaitonde painting sold for Rs 23.7 crore—an all-time record for an Indian artist. And now, 13 years after his death, the Guggenheim Museum in New York has mounted the most extensive retrospective of his art to date, gathering 45 varied works produced across five decades.

Had he lived to see it, Gaitonde would likely have viewed all the fuss with a certain detachment. He was often described as a recluse; Sandhini Poddar, the curator of the Guggenheim show, prefers to say that he “tended toward solitude”. He was a small man, but stocky, peering out at the world through thick glasses, unshakably confident yet seemingly free of ego. He cut ties with his family as a young man, leaving no heirs or estate. Zen Buddhism was a lifelong fascination, and he saw painting as a phenomenon that has meaning only when experienced entirely in the moment, for artist and spectator alike. “Everything starts from silence,” he told the journalist Pritish Nandy in 1991. “The silence of the brush. The silence of the canvas. The silence of the painting knife. The painter starts by absorbing all these silences. You are not partial in the sense that no one part of you is working there. Your entire being is.”

Like Paul Klee and Wassily Kandinsky—two looming influences on his early work—Gaitonde saw painting as a fundamentally spiritual practice. Beyond his interest in Zen, he found inspiration in a trio of Indian sages: Sri Ramana Maharshi, who was known for his ‘silent teachings’; Sri Nisargadatta Maharaj, who emphasised non-duality; and Krishnamurti, who sometimes gave lectures at Bombay’s Sir Jamsetjee Jeejeebhoy School of Art, where Gaitonde studied until 1948. The Guggenheim show includes several examples of his work from the 50s, when he was still experimenting with representation. Some tend toward Cubism; others are downright whimsical, such as a small, charming watercolour of a woman flying a kite.

The first big shift came in 1959. He traded his brush for a roller, often also employing a palette knife to add and subtract paint, and abandoned his easel in favour of working flat on a table. He never again made a representational work. He was now interested, he said in 1962, in “pure painting—painting which has detached itself from the world of objects to explore its own endlessly exciting possibilities.” But this detachment from objects wasn’t meant to imply some kind of total break from the physical world. ‘The study of ‘Zen’ has helped me to understand nature, and my paintings are nothing else but the reflection of nature,’ he wrote in an artist questionnaire for the Museum of Modern Art (MoMA). ‘I want to say things in few words. I aim at directness and simplicity.’ Throughout his career, he produced only five or six paintings each year. “I don’t work, I relax and wait, and then I apply some paint on the canvas,” he told the artist Pramod Ganpatye. “The most important aspect of painting is waiting, waiting, waiting, between one work and the next.”

Gaitonde didn’t call his work ‘abstract’. His own word for his painterly philosophy was ‘non-objective’. It’s a distinction that’s difficult to explain in plain language, not least because both terms have eluded universally agreed-upon definitions even among those fluent in art-speak. But Gaitonde’s insistence on ‘non-objective’ does place him firmly in the lineage of the Guggenheim, a museum that in its first incarnation was called the Museum of Non-Objective Painting, which explains in part why his work feels so at home there.

Gaitonde lived and worked in India his entire career, and he’s always been far better known in his home country than he is in America. But if the Guggenheim has proven to be the most natural place to host the most extensive exhibition of his work, it’s tempting to ask: how Indian is his art? But such geographic quibbles do a disservice to Gaitonde’s global appetite for inspiration. He was as fluent in Chinese calligraphy and Indian miniatures as he was in Abstract Expressionism or European Modernism. And as Poddar illuminates in her catalogue for the show, Gaitonde’s career can be seen as an important segment of a longtime intercontinental conversation that in fact began in the East, with the Theosophists’ interest with Eastern religion, particularly Hinduism, which inspired the European avant-garde, including Klee and Kandinsky. ‘That they in turn,’ Poddar writes, ‘inspired mid-twentieth-century artists working with abstraction and nonobjectivity in both America and India is a noteworthy incidence of early transnationalism and the global circulation of art and ideas.’

The major transnational experience of Gaitonde’s life came in 1964. Gaitonde’s artist friend Krishen Khanna recommended him to Porter McCray, a MoMA official who administered a cultural-exchange grant called JDR 3rd Fund. Gaitonde spent the year in New York City. MoMA acquired several of his paintings, and he struck up a crucial acquaintance with Mark Rothko, who at that time was deeply involved in his black-on-black paintings. But McCray wasn’t pleased. “I’m very disappointed in your friend,” he told Khanna. “He spends all his time looking at films, at the cinema.” Khanna explained that Gaitonde’s eclectic interests were central to his artistry. He was a genuine omnivore, interested in everything from music to poetry to movies to literature. “He was a truly civilised human being,” Khanna told Poddar.

Another shift came around 1968, when he began to favour large vertical canvases. He invented a technique he called the ‘lift-off’, in which he applied paint to canvas using torn pages from newspapers and magazines, spread the paint with rollers, then erased some of it with palette knives. None of the paper remains on the canvas, only the oil paint. You might call them ghost collages. But something deeper shifted, too—he’d learned to achieve a frightening complexity in his use of colour, and all of his innovations and experiments started to gel into something singular.

His work from the 70s and 80s is the vital heart of the exhibition. The range of media he conjures using oil paint alone is astonishing; sometimes it bleeds like watercolour; sometimes it splotches like sponge. Many of these works experiment with the techniques and principles of calligraphy, offering glyphs of his own invention in oil that flows like ink. “His actual work is the trace of the elements with which he chooses to start a painting,” Khanna told Poddar. “He chooses, say, two colours, he makes his ground absolutely perfect, and he doesn’t know what he’s going to paint… I think that’s his big contribution, they’re happenings actually. He’s doing it, and he can’t do it again, it can’t bear repetition. In his whole repertoire you won’t see the same colours again, even the same shade of red.”

These images can seem to straddle the second and third dimensions: up close, the paint is often so thinly applied that every thread of the canvas is distinct, yet from a few paces back the oils glow from the frame, the ‘lift-off’ segments seeming to float atop a haze of subtle tonal contrasts. His palette in these works takes earthiness to the point of decay: filthy browns, nuclear yellows, toxic oranges, mucky greens, and sun-bleached whites; trickles of rusty red; splotches of mouldy black. The 70s paintings in particular bring to mind some ecological disaster, or at the very least the dankest natural processes of organic rot: the underside of a stone, or the walls of a flooded house just after the waters have receded. In several early 70s canvases, perfect circles emerge from the murk, like eyes or suns or beacons of warning. It’s in these works that Gaitonde’s vision comes most fully to life, and their message seems to have something to do with death.

Of course, these are only my private reactions, the thoughts that surfaced in the actual moments when the canvases were in front of me. My immediate impressions can’t in any way explain what Gaitonde’s paintings ‘mean’ to anyone else. But as many non-objective artists see it, the experience of the moment is the entirety of what a painting means to an individual spectator. Kandinsky contended that the ‘contents’ of his abstractions are “what the spectator lives or feels while under the effect of the form and colour combinations of the picture,” and Gaitonde, too, Poddar writes, ‘would stress the place of the spectator, and his or her own experience of the work, over any inherent directive or objective to his paintings.’ An exhibition isn’t about the artist anymore. It’s the viewers’ turn to live for a moment under the spell of the work and alchemise it into whatever they will.

In 1972, Gaitonde and his friend Ram Kumar both won the Padma Shri award from the Government of India, and Gaitonde moved into his one-room flat in Nizamuddin East. For years Kumar’s wife sent him a daily tiffin lunch to eat in his dusty room. Then in 1984, Gaitonde was badly injured in a car accident in New Delhi, and for the next several years he was unable to continue his work on large canvases. Instead he turned his attention to small ink drawings on paper—with a special focus on calligraphic forms and techniques that had long fascinated him. (It’s interesting that an artist who’s so difficult to write about found such inspiration in letterforms throughout his career, unreadable as they may be.) Some of the examples on display from this period look like impossible blueprints etched with taps from a sharp stone; others resemble Japanese prints viewed through a squint.

“I’m still learning about painting, because I believe that the process is constant,” Gaitonde said in an interview for ART India in 1998, three years before he died. “Painting is a struggle—you have to inquire, you have to have a thinking mind… I could never stop painting, but even if I do stop, I will continue to talk about it. Painting and Gaitonde are synonymous.”

(VS Gaitonde: Painting as Process, Painting as Life is on display at the Solomon R Guggenheim Museum, New York, until 11 February 2015)