The Other Song of Dusk

Zarina Begum, the last pupil of Begum Akhtar, is testimony to the highs and lows of a life dedicated to gayaki 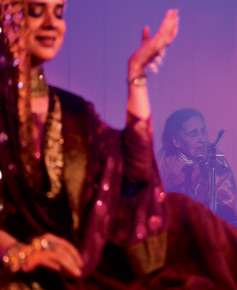 Zarina Begum, the last pupil of Begum Akhtar, is testimony to the highs and lows of a life dedicated to gayaki

“I was very weak, I didn’t want to come … but they insisted so much,” Zarina Begum told me when I asked her how it felt to be in New Delhi to perform at the Indira Gandhi National Centre for the Arts (IGNCA) last week. Zarina Begum, once a famous singer in the resplendent mehfils of 1970s Lucknow, is considered the last surviving apostle of Begum Akhtar, the inimitable Mallika- e-Ghazal of India. She was in Delhi last week to recreate the music of the illustrious court of Awadh with a recital of ghazals and thumri. She performed to a dewy-eyed audience visibly speechless and star-struck, unaware that she was struggling with a fever that refused to recede.

Zarina Begum is the last practitioner of a genre of music drawn from the traditional soirees or mehfils hosted by the culturally innovative Nawabs of Awadh in the late 19th century. The elegant courtesans in the lavish court of Awadh were instrumental in shaping the contours of Hindustani classical music— comprising such forms as the dadra, thumri, ghazal and tappa. Begum Akhtar was one of the leading exponents of this musical tradition in the 20th century and Zarina Begum is the only surviving artiste who performs in Akhtar’s distinctive style. Though hemmed in by age and ill-health, 82-year-old Zarina Begum still retains a voice powerful enough to bring back the splendour of an era long past.

Zarina Begum was born in 1942 to an acclaimed musician’s family in the Nanpara district of Uttar Pradesh. Saba Dewan, a noted documentary filmmaker based in Delhi who made a movie in 2009 on the craft and lifestyle of courtesans titled The Other Song, says, “Since her father Shahenshah Husain was a well-known musician attached to the Nanpara taluqdaari estate, Zarinaji as a child had the opportunity of hearing great women artistes like Begum Akhtar and Rasoolan Bai perform in the mehfils held there. Born in a family of hereditary male musicians, Zarinaji’s struggles to find her musical destiny had begun in early childhood itself.”

When she was about ten years old, Zarina Begum chanced upon a destitute bajawalla (musician) in need of money. She sensed an opportunity to practise music on her own and readily purchased his harmonium for a sum of Rs 10, using up all her savings. She would then regularly impersonate mehfil singers under her lihaaf, unseen by anyone in the house. Shehanshah Husain soon learnt of his daughter’s ardent desire to sing. Convinced of his daughter’s talent and potential, he decided to train her himself and did his utmost to assure her the best possible exposure, letting her perform at the mehfils of Nanpara, besides arranging formal training for her under the famous Qawwal Ghulam Hazrat of Firangi Mahal. The King of Nanpara was so impressed by Zarina Begum’s voice that he gave her family 700 bighas (around 140 acres) of land as a token of appreciation. Around the time that she was discovering her identity as a singer, she was married off to a rich contractor from Nanpara. In a tragic twist, her husband, who was not supportive of her aspirations, asked her to make a choice: a life dedicated to domestic duties or that of a singer. Zarina Begum did not hesitate to choose what she was born to do, and was deserted later by her husband—with whom she had two children.

Unperturbed, Zarina Begum continued her singing performances, always accompanied by her father. It was at one such performance in the Bahraich district, at the age of 25 or 26, that Zarina Begum drew the attention of Begum Akhtar, who was so fascinated by the potency of her voice that she knew she had to adopt Zarina as her pupil and train her in the finer aspects of ghazal gaayaki and thumri. Destiny had other surprises in store. Zarina Begum met her second husband Qurban Husain, who worked with Begum Akhtar as a tabla player, at the same concert. Thus began a long and rewarding career of singing in countless soirees hosted by the crumbling nobility of Nanpara, Mehmoodabad, Rampur, and later Lucknow. Suddenly, she was everywhere: at weddings and private ceremonies, at royal feasts and dinners, at conferences and concerts, and on All India Radio Lucknow. Her voice even featured in a couple of Hindi movies, like Gaman (1978) and Let’s Talk (2002).

She would stay away from home and family for months and perform for an audience that, by her own admission, “was very knowledgeable in terms of poetry and gaayaki. They appreciated [the singing] at all the right places and gave us the freedom to explore musical [possibilities] without time constraints.” The audience, back in those days of the 70s, was both sophisticated and enamoured of her voice. Her haunting rendition of Aye Mohabat Tere Anjam Pe Rona Aaya would evoke raptures of applause and requests for encores. In one particular mehfil she fondly remembers, Kaifi Azmi, bedazzled by her performance, told her, “Dus saal hamari zindagi ke, Zarina aap ke naam likh dengey.”

THOSE DAYS are just a faint memory. Zarina Begum now spends her days in penury in a rented one-room house in Aminabad. Her story is as much the story of a dying art as one of personal travesties and professional setbacks. In spite of being extensively recorded in her heyday, she never quite got the credit or acknowledgement she deserved from companies that used her voice for commercial purposes. Being largely illiterate and devoted to her craft, Zarina Begum and her husband would meekly accept whatever payment they received from their admiring patrons.

Yet, her achievements were extraordinary. Though she was brought up in a North Indian Muslim family of strict purdah observers, Zarina Begum chose to master a genre of Indian music that was associated with ‘tawaif’ culture, an institution defamed as morally bankrupt in her day and age. She had to fight intense social stigmatisation to continue her métier. “I have not taught my daughter to sing as this was not a respectable profession.” The money she despatched back home while travelling for performances was reportedly frittered away by her brother, and soon there was nothing left. She currently lives with her son who is a tabla player with a disabled leg. Qurban Husain died some eight years ago.

Her sunken face and small sparkling eyes lined with kohl betray a trace of sadness, dejection even, as she remarks, “Koi sunne wala hi nahi hai, kiske liye gayengey. Aajkal toh sab filmi sunte hain.” I ask her if she ever taught singing or aspired to open a school for this elegant style of gayaki, and a wry smile crosses her face before she replies: “Of course I did. But who has the discipline and the patience these days, most of them learn for a month or two and are never seen again….”

In the documentary The Other Song, there is a short clip featuring the petite frame of Zarina Begum on her harmonium, singing with all the delicate gesticulations of a mehfil singer. To the camera she narrates an incredibly amusing incident about a soiree held in the house of a Nawab. The gathering was suddenly disrupted by the appearance of a bandit who pointed his rifle at everyone present and asked a frightened Zarina to sing something he might understand. After repeated attempts to entertain him with all kinds of ghazals and dadra, she finally sung Nazar Laagi Raja tore Bangle Par, hearing which “Daku Saheb Pyarelal took out his bag and started showering over me all his money, repeating after me, ‘Nazar laagi raja tore bangle par’ (I’ve got my gaze on your bungalow, my king!).” Full of beguiling simplicity, Zarina Begum has many such tales to share.

Last week, Manjari Chaturvedi, president of the Sufi Kathak Foundation, organised what might be the last public performance of Zarina Begum at the IGNCA. She recounts a meeting she had with the singer last year: “When I met her in September, she expressed a desire to wear a Banarasi sari and sing one last time on stage, and I was moved to tears… I promised myself to make that happen for Zarina and this is how this whole concert came about.”

Decked in a dark pink Banarasi with a rich golden border for the concert, Zarina Begum’s was a portrait of sublime grace. Observed Kumud Diwan, a thumri practitioner who performed alongside Zarina Begum at the IGNCA concert, “The striking thing about her is her spirit as an artiste, that she is paralysed waist down but has the courage to sing in spite of her advancing age and frailty.”

Just the day before her performance at the IGNCA, Zarina Begum’s daughter Rubina Khatoum was happy to see her mother gear up. “When she did her riyaaz yesterday, her demeanour suddenly transformed,” says Rubina, “She did not look ill at all. She was very excited that she was going to sing.” Zarina Begum received a standing ovation for her performance that night. Before her departure via the night train, sitting in a wheelchair, she struggled hard to control her tears. “I could never imagine people still love me so much,” said Zarina Begum, “I will come back to sing again.”